Confined at home, Chinese get creative to beat boredom

BANGKOK (AP) — Chinese around the country confined to their apartments either by choice or by order are making the best of the situation as cities remain in lockdown in a desperate bid to contain a new, dangerous virus.

A couple from Shantou, a coastal city in Guangdong province, recreated a childhood game at home for their children.

In video posted on Douyin, a popular Chinese social media platform, the mom pretends to be a street vendor selling hoops made of cardboard paper. The children throw the hoops to score prizes laid out on the ground. It is a popular game usually played outdoor at Chinese New Year celebrations, but this year is different.

“Many travel plans and outdoor activities were canceled. A lot of people are strictly limiting their needs of going outside,” said Ouyang, the father. “Staying home is boring. So we decided to play this game at home with our kids and record a short clip of it.”

A woman who goes by screen name Liang Jinjin lives in Yichang in Hubei province, a city not too far from the outbreak epicenter of Wuhan and one of several places where public transportation and traffic with the outside world have been blocked off. In her collection of videos, she sips water from a giant glass to her own reflection in the mirror and drinks from a coconut with a TV background showing animation of a beach. In another clip, she makes a tiny snowman with ice from her freezer. 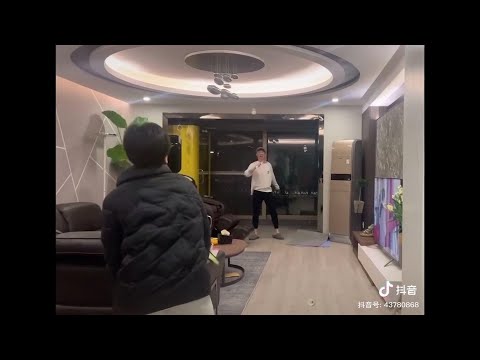 “During the outbreak, everyone is nervous and staying at home spontaneously. But staying home is very boring, so this video of me ‘traveling’ at home is to hope that everyone can face the epidemic with positivity and optimism,” she said.

Schools around China have delayed the start of spring semester due to the outbreak. So university student Wei Zikai turned his living room into a badminton court.

Others took to the social media to show off their skills like playing word games with Apple’s virtual assistant Siri, pretending to be fishing from a small bucket in their room, and playing billiard using chopsticks and cherry tomatoes and longan, a tropical fruit, for balls.

On Monday night, residents of some Wuhan high-rise apartment buildings joined together, at least in spirit, from their balconies and windows to sing the national anthem and other songs.

The anthem’s refrain, “Qilai, qilai, qilai!” or “Rise up, rise up, rise up!” echoed between the towers of skyscrapers in the city of 11 million, where streets have grown eerily quiet as families try to avoid contact with others who might be infected.

Others shouted “Wuhan, fight!” echoing the chants heard from protesters in Hong Kong, where anti-government demonstrations have stretched on for months.

The death toll from the virus has topped 100 and more than 4,500 have fallen ill. More than 50 million people in Wuhan and nearby cities are being kept in place in the most far-reaching disease control measures ever imposed.