STRASBOURG, France (AP) — French police have killed the man who they believed attacked Strasbourg’s Christmas market but investigators kept digging Friday for possible accomplices in a city known for a high concentration of potential extremists.

A fourth victim of Tuesday night’s attack on the biggest Christmas market in France died Friday. The dead included a Thai tourist and a 29-year-old Italian journalist. A dozen other people were wounded.

The market reopened Friday in a bid to reclaim a festive spirit after being closed for two days after the attack. French President Emmanuel Macron paid a visit, arriving after a European summit in Brussels to offer his condolences to the wounded and victims’ families and to salute security forces. He spoke with the three police officers who less than 24 hours earlier shot and killed Cherif Chekatt, the attack suspect.

For three days, Macron has faced back-to-back national emergencies, dealing with the Christmas market attack and in the midst of a month of grassroots protests over the cost of living that have grown increasingly violent and have devastated parts of the French capital.

The government has implored the French not to take to the streets Saturday, evoking the Strasbourg tragedy and the security situation that has strapped soldiers and police. 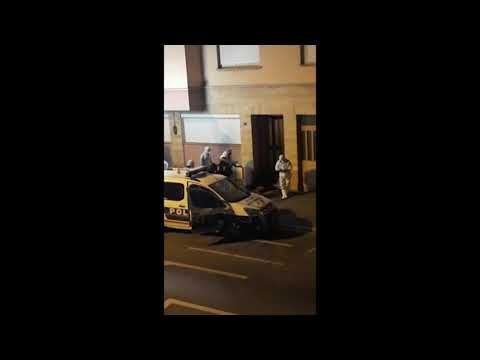 Chekatt, the 29-year-old Strasbourg native, was killed Thursday night in a confrontation with three police officers in his childhood neighborhood after a massive manhunt.

The depth of his radicalization and connections remained unclear, but his path seemed to reflect an increasingly common hybrid European extremist who moves from delinquency to sowing terror.

The Islamic State group’s Amaq news agency claimed Chekatt was a “soldier” of the group but Interior Minister Christophe Castaner rejected the claim as “totally opportunistic.”

Investigators are now trying to identify “eventual accomplices or co-authors who could have helped or encouraged him in preparing his move into action,” prosecutor Remy Heitz, in charge of terrorism cases in France, told reporters at a news conference Friday.

He said seven people were in custody, including four of Chekatt’s family members and three in his “close entourage” — two of them detained Thursday night.

“We want to reconstruct the past 48 hours in order to find out whether he got some support,” Heitz said.

The Strasbourg shooting was the latest in a series of deadly attacks that have claimed more than 200 lives in France since 2015. Like other attack sites, the Christmas market was heavy with symbolism.

“This Christmas market is part of our history. It’s part of our common events and belongs to all the French people,” Castaner said during a walk-through at its reopening. “And this morning, we wanted to show, as we walked down the lanes, that we always know how to get our head up again.”

Macron suggested while in Brussels that authorities were working to clarify why Chekatt was not stopped beforehand. He had been on a French intelligence watch list for radicalism and was convicted 27 times for criminal offenses — the first time at age 13 — mainly in France but also in Germany and Switzerland.

French police tried and failed Tuesday morning to arrest him in a case of attempted homicide.

Macron told reporters Friday in Brussels that France should look at “the consequences” of any police failures and work on “what could be improved.”

Extremism is not a new phenomenon in Strasbourg, where more than 200 people are on watch lists for potential radicalization or already radicalized, a Strasbourg police official told The Associated Press. The official spoke on condition of anonymity and that figure could not be officially confirmed.

Strasbourg’s Christmas market has been a previous target. Ten suspected Islamic militants were convicted and sentenced to prison in December 2004 for their role in a foiled plot to blow up the market on New Year’s Eve 2000.

Six youths from Strasbourg have been arrested after returning home from Middle East battle zones, part of a group of 14 reported to have left to join the jihad. As early as 2012, Strasbourg had harbored Islamic militant cells planning action elsewhere in France.

He said two crucial tips came in from residents in Strasbourg’s Neudorf neighborhood. Three officers patrolling in Neudorf then spotted a man corresponding to the suspect’s description. Noticing their marked police car, the suspect tried unsuccessfully to enter a building. When police officers identified themselves, Chekatt turned abruptly and opened fire on them.