Christian Siriano puts some politics on his Hawaii runway

As the designer’s husband, Brad Walsh, sat front row in a T-shirt that dropped an F-bomb in the direction of President Donald Trump, Siriano flashed “I’m voting for Cynthia” on his own T when he took his bow at the close of a marathon show at Gotham Hall, a grand venue with a yellow sunburst pattern in the carpeting that added flare to his 66 looks.

Yes, there were 66 looks. A toddler in a tutu conked out on the front row in her mother’s arms before the end.

Siriano has made no secret of his progressive leanings, clearly, but for emphasis that he’s supporting Nixon against incumbent Andrew Cuomo in the Sept. 13 primary, he put “Cynthia for NY” fliers on seats. Nixon, sandwiched between Judith Light and Whoopi Goldberg on the front row, said after that she was thrilled with the shoutout, which included a model walking in a pro-Cynthia T-shirt as well.

“That was an amazing tribute, but I was mostly just dazzled by the incredible creativity and the beauty and the variety of his designs,” said the “Sex and the City” alum. “Christian is really someone who is very political.” 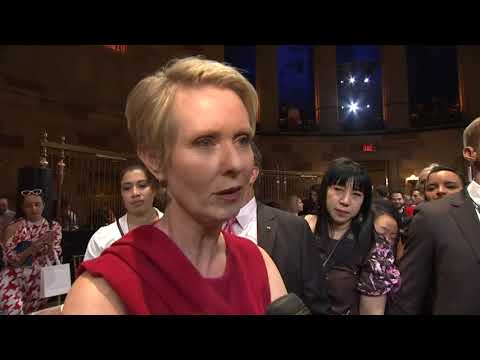 When it comes to fashion, Nixon said, “He doesn’t really separate the two.”

Nixon was correct about variety. This was Siriano’s dream Hawaii vacation, in everything from elegant tropical prints in dresses and flared trousers with matching chunky heels to animal prints to a showstopper of an organza evening gown in chartreuse. A trio of party frocks was shown together in flamingo pink.

“Because last season was quite dark and romantic, this was a little bit lighter, a little bit fresher, kind of going on this idea of a Hawaiian holiday,” Siriano said backstage before the show. “I wanted to be a little more playful.”

Tiffany Haddish, Carmen Electra, Sarah Hyland and Hayley Kiyoko were among his other guests. Cardi B, who had been a regular, was absent after her shoe-throwing confrontation with Nicki Minaj the night before at the Harper’s Bazaar Icons party.

“I love Cardi and it’s so sad, whatever happened last night,” Siriano said, pivoting to another subject.

The other subject was fashion, of course, and it came this season in cheetah print dresses, zebra print blazers and lots of flared trousers, along with pencil skirts, chartreuse blouses, wrap skirts and drape dresses — and black ruffles galore.

This Siriano lady is ready for anything when she steps off that plane in paradise.