WEST PALM BEACH, Fla. (AP) — A former Florida police officer received a 25-year prison sentence Thursday for the fatal on-duty shooting of a black musician whose SUV had broken down after a late-night concert.

Fired Palm Beach Gardens officer Nouman Raja was the first Florida law enforcement agent in nearly 30 years to be convicted and sentenced for an on-duty killing — and one of only a few officers nationwide.

The 41-year-old defendant was sentenced by Circuit Judge Joseph Marx as family and friends of the 31-year-old victim, Corey Jones, looked on in a hushed courtroom jammed with supporters from both sides.

Marx said sentencing defendants is the hardest part of his job, something he loses sleep over even when dealing with a hardened, career criminal. Raja is not that, he said. He could have given Raja a life term, a sentence prosecutors sought.

“This has been a heartbreaking case,” Marx said. “I think it has had a profound effect on every single person who sat through this trial.”

Jones’ family exited the courthouse singing the gospel song “Victory is Mine.” Jones came from a family of ministers and was to have performed at their church the morning he was killed in 2015. His father, Clinton Jones Sr., had told Marx earlier he hadn’t deleted his son’s number from his cellphone because that would be too hard emotionally. 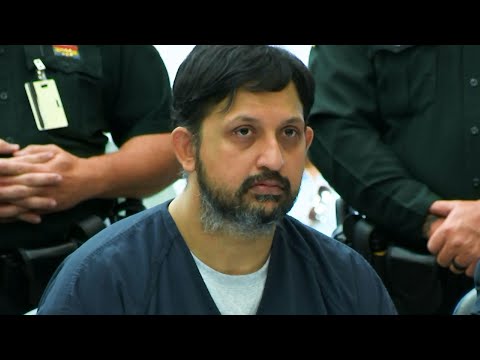 “We knew what the truth was and we stood by that,” Jones told reporters after the hearing. He said he never doubted Raja instigated the altercation. “Because of the son we had raised and the type of character he had, we knew ... it wasn’t our Corey.”

Raja’s wife, Karine, asked Marx to show leniency so her husband could be a father to their two young children. She said the media and others had unfairly portrayed him as “a monster, the angel of death.” Raja, dressed in a blue jail jumpsuit with his wrists and ankles shackled, often dropped his head as his wife spoke. He had grown a beard since his convictions last month for manslaughter and attempted murder and appeared to have lost weight.

“Why I am so angry is that the wrong person was chosen to be a sacrificial lamb,” his wife said. “Raja is the man you wanted serving and protecting you.” His attorneys left court vowing to appeal.

Prosecutors contended Raja escalated what should have been a routine interaction into a deadly confrontation with Jones, a housing inspector and part-time drummer. Raja’s attorneys had argued that he acted in self-defense both as a police officer and under Florida’s controversial “stand your ground” law, which a previous judge rejected.

Raja, of Asian descent, was in plain clothes for an auto burglary investigation team when he spotted Jones’ SUV at 3:15 a.m. on Oct. 18, 2015. Jones was headed home from a nightclub performance by his reggae band when his vehicle stalled on a dark highway off-ramp. He had a concealed-weapons permit and carried a handgun, purchased days earlier to protect his $10,000 drum set, which was in the SUV.

Raja, wearing jeans, a T-shirt and a baseball cap, drove an unmarked van the wrong way up an off ramp within feet of the SUV.

Prosecutors said Raja never identified himself as an officer and acted so aggressively that Jones must have thought he was about to be carjacked or killed. Raja’s supervisor testified the officer had been told to don a police vest if he approached a civilian. He didn’t, nor did he pull his badge.

What police didn’t know at first was that Jones had been talking to a tow-truck dispatcher on a recorded line. That recording shows Jones saying “Huh?” as his door opens. Raja yells, “You good?” Jones says he is. Raja replies twice, “Really?” with Jones replying “Yeah.”

Suddenly, Raja shouts at Jones to raise his hands, using an expletive. Jones replies, “Hold on!” and Raja repeats his demand.

Prosecutors believe Jones pulled his gun and tried to run away. Raja fired three shots; Jones ran down an embankment. Prosecutors said he threw his gun, but Raja fired three more times, 10 seconds after the first volley. One of the bullets pierced the man’s heart. He was also hit in both arms.

Prosecutors charged Raja with manslaughter, saying his actions created the confrontation and showed “culpable negligence.” They also charged him with attempted murder, saying no matter which of Raja’s six shots killed Jones, the second volley was a conscious effort to kill him as he fled.

The last Florida officer sentenced for an on-duty killing was Miami’s William Lozano in 1989. The Hispanic officer fatally shot a black motorcyclist who he said tried to hit him. A passenger died when the motorcycle crashed, setting off three days of rioting.

Lozano was convicted of two manslaughter counts in a Miami trial and sentenced to seven years, but never served it. State appellate court justices dismissed the verdict, saying the case should have been moved from Miami because of racial tensions. Lozano was acquitted at a 1993 retrial in Orlando.