The Latest: Kansas City to remove King’s name from street

KANSAS CITY, Mo. (AP) — The Latest on Kansas City’s vote to remove the name of Martin Luther King Jr. from a major boulevard (all times local):

Kansas City voters have overwhelmingly approved removing the name of Dr. Martin Luther King Jr. from a city boulevard in favor of the street’s original name, The Paseo.

Unofficial results show the vote to remove King’s name received nearly 70% of the Tuesday’s vote, with just over 30% voting to retain King’s name.

The vote came after months of heated debate that began shortly after the city council voted in January to name the 10-mile (16.09-kilometer) boulevard that runs through a mostly black area of the city after the civil rights icon. Kansas City was one of the last large cities in the U.S. to name a street for King.

A group called “Save the Paseo” in April turned in far more than the 1,700 signatures needed to get the issue on the ballot. They argued the city council didn’t follow proper procedures when it renamed the street.

Mostly black civil rights leaders who worked for years to secure King’s name accused “Save the Paseo” of being racist and warned the city’s reputation would suffer if his name is removed.

After nearly a year of debate that included charges of racism on one side and claims city officials bypassed rules on the other, Kansas City, Missouri, residents will decide whether to remove the Rev. Martin Luther King Jr.’s name from an historic boulevard. 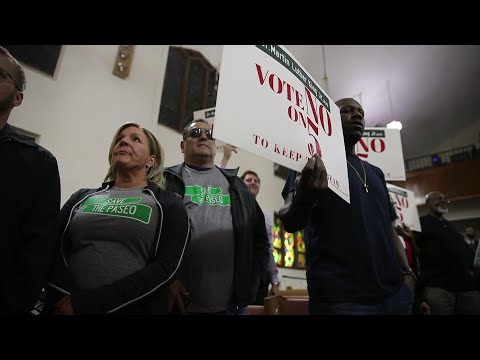 Voters will decide Tuesday if they want to change the 10-mile boulevard back to its original name, The Paseo.

The City Council voted in January to rename the boulevard to honor King, ending Kansas City’s reputation as one of the largest cities in the U.S. without a street named for the iconic civil rights leader.