On Super Tuesday eve, Biden gets boost from former rivals

The urgency of the moment reflected deep concerns from the Democratic establishment that Bernie Sanders, a polarizing progressive, was positioned to seize a significant delegate lead when 14 states, one U.S. territory vote on Tuesday.

Klobuchar suspended her campaign and endorsed Biden Monday, a day after Buttigieg announced his exit. Both Klobuchar and Buttigieg, who had been Biden’s chief competition for their party’s pool of more moderate voters over the last year, declared their public support for Biden at evening events in Dallas. They were joined by another former competitor, former Texas Rep. Beto O’Rourke, who also backed Biden on Monday. 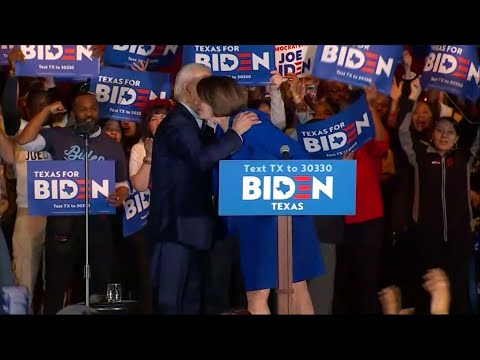 The dramatic developments came at a key crossroads in Democrats’ turbulent primary season as the party struggles to unify behind a clear message or messenger in its urgent quest to defeat President Donald Trump. Yet as a field that once featured more than two dozen candidates shrinks to just five, the choice for primary voters is becoming clearer.

On one side stands Biden, a 77-year-old lifelong politician who represents a pragmatic approach to governing that emphasizes bipartisanship and more modest change. He’s clearly relishing the swift improvement of his political fortunes in recent days. On the other stands Sanders, a 78-year-old democratic socialist who has for decades demanded aggressive liberal shifts that seek to transform the nation’s political and economic systems. He is working to maintain the momentum he built coming out of the earliest voting states.

Yet the primary isn’t currently a two-man race.

New York billionaire Mike Bloomberg, in particular, could create problems for Biden’s establishment appeal. The former New York City mayor, who will appear on a 2020 ballot for the first time on Tuesday, has invested more than a half billion dollars into his presidential bid and wracked up many high-profile endorsements of his own.

And Massachusetts Sen. Elizabeth Warren, who has struggled for delegates and momentum over the last month, has vowed to stay in the race until the party’s national convention in July.

On the eve of Super Tuesday, however, Biden received a significant boost following his resounding victory over the weekend in South Carolina.

He posted his best two-day fundraising haul in more than a year, raising roughly $10 million over the last 48 hours. And the former vice president added to his considerable endorsement lead in recent days as elected officials began to coalesce more meaningfully behind him. He has long been the favorite of many elected officials even as he struggled through the first three primary contests of the year.

Virginia Rep. Don Beyer, the first member of Congress to endorse Buttigieg, said he planned to endorse Biden and expected Buttigieg to as well.

“I do think it’s the most logical,” Beyer said of a Biden endorsement, given his echo of the former vice president’s call for civility, a mantra of the Buttigieg campaign. “I think Joe is the next best possibility.”

Perhaps the most powerful endorsement would come from former President Barack Obama, who has a relationship with most of the candidates and has talked with several in recent weeks as primary voting has begun. He spoke with Biden to congratulate him after his South Carolina victory, but still has no plans to endorse in the primary at this point.

Campaigning in Klobuchar’s home state of Minnesota on Monday night, Sanders discouraged the crowd from booing Biden and welcomed his rivals’ supporters to join his campaign.

“To all of Amy and Pete’s millions of supporters, the door is open. Come on in,” Sanders said. “We all share the understanding that together we are going to beat Donald Trump.”

“It’s becoming increasingly clear that the candidates funded by big money and super PACs are coalescing behind Joe Biden, and that’s not a surprise,” he said.

And while Biden’s momentum is undeniable, not everyone in his party’s moneyed establishment is convinced.

Some major donors preferred to wait until after Super Tuesday to decide whether to join the Biden movement. And even some of his more loyal fundraisers remain frustrated by disorganization within the campaign.

For example, the former vice president has struggled to raise money in Silicon Valley, where many wealthy donors prioritize organization and a data-driven plan. The inability of Biden’s team to demonstrate such competence pushed many donors toward his rivals, and others are taking a wait-and-see approach.

“We need to see what happens tomorrow, which is going to be very telling,” said Alex Sink, a Democratic donor and former Florida gubernatorial candidate who endorsed Bloomberg.

And the former vice president’s strategy for the coming days, which relies on media coverage and dispatching his new collection of surrogates, reflects a stark reality: Compared to Sanders and Bloomberg, Biden is understaffed, underfunded and almost out of time as he fights to transform his sole South Carolina victory into a national movement.

Biden announced he raised $18 million in February, compared to an eye-popping $46.5 million for Sanders and $29 million for Warren.

Sanders has struggled to win over his colleagues in Congress but earned a high-profile endorsement of his own on Monday from Democracy for America, a national grassroots organization originally led by former Vermont Gov. Howard Dean that boasts thousands of members across the county.

“The overwhelming support for Bernie we saw in our member vote should be a wake-up call to the broken, visionless, corporate Democratic establishment,” said the organization’s chair Charles Chamberlain. “Americans want fundamental change in Washington, not a return to the status quo.”

Some Democrats also bemoaned the distinct lack of diversity in the shrinking field.

The National Organization for Women’s political action committee endorsed Warren on Monday. The group’s president, Toni Van Pelt, said she’s alarmed about the lack of attention paid to the female candidates, who have often had to defend their “electability.”

“It’s time to support a woman,” she said. “We want to make sure we’re not looking at all these old white men again.”

Through four primary contests, the AP allocated 60 delegates to Sanders, 54 to Biden and eight to Warren.

The first four states were always more about momentum more than math. Super Tuesday states offer a trove of 1,344 new delegates based on how candidates finish. Just 155 delegates have been awarded so far.

Peoples and Slodysko reported from Washington. Associated Press writers Bill Barrow in Atlanta, Will Weissert, Julie Pace and Seth Borenstein in Washington and Thomas Beaumont in Des Moines, Iowa, contributed to this report.