Of all the ways that John Lewis influenced American life and politics, his indelible impact on young people may be among the most enduring. From student activist to elder statesman, Lewis continually encouraged the nation’s youth to start “good trouble” — and modeled just how to do that.

He was arrested alongside millennial activists pushing for comprehensive reform of U.S. immigration laws in 2013. He led a sit-in in the House of Representatives over gun control following a mass shooting at an LGBTQ nightclub in Orlando in 2016. And when he was not protesting, he was helping young people understand history, as when he cosplayed as his younger self at San Diego’s Comic-Con to celebrate the release of his Selma, Alabama-themed graphic novel series in 2015.

Lewis, the Black civil rights icon who some called the “conscience of Congress,” died Friday.

In one of his last public appearances, he posed for a picture in June, standing on the Black Lives Matter Plaza mural painted just outside of the White House amid nationwide protests over the death of George Floyd.

For the Black Lives Matter generation, the connection to Lewis is deeper than many may realize. As a young man, through clouds of teargas and a hail of billy clubs, Lewis nearly lost his life marching against segregation and for voting rights. As a Georgia congressman, Lewis was generous with his time, taking meetings and sharing stages with activists who, from Sanford, Florida, to Ferguson, Missouri, Baltimore to Minneapolis, also withstood teargas — as well as rubber bullets, pepper spray and arrests — in their own protests against racism. 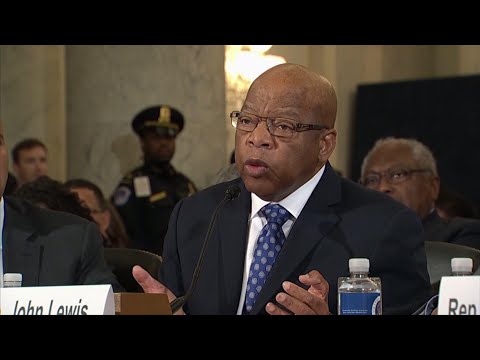 Activists remember the legacy left behind by Rep. John Lewis.

“He didn’t have to stand with us, he chose to,” Malkia Devich Cyril, the founder and senior fellow of MediaJustice, which advocates for open and democratic media and technology platforms, told The Associated Press. “That’s real leadership.”

In exclusive interviews with the AP, prominent organizers from the Black Lives Matter movement reflected on Lewis’ example and his kinship with their generation:

“I remember sitting on the other side of President Obama from (Lewis) at this pretty historic, multigenerational civil rights meeting, and understanding the optical placement of the generations in that moment. And I just kept thinking to myself, do not let John Lewis down. … I was finally able to thank him, face to face, eye to eye, for treading the path my generation was now walking. … With kindness in his eyes and determination in his voice, he reminded me that the road to freedom is never easy — and that’s precisely why we have to keep taking it. ‘You’ll have setbacks,’ he told me. ‘Keep going. Be consistent. You will get there.’”

PHILLIP AGNEW, co-founder of the Dream Defenders, a police and prison abolition group, and organizer in the Movement for Black Lives:

“I think the first time I ever met him was at (Congressional Black Caucus Foundation), the legislative forum that they have every year. This is kind of after Dream Defenders had taken over the Capitol of Florida, and there was a big buzz about our little fledgling group at that time. I didn’t think that he would know who I was — I absolutely knew who he was. … And I remember him coming and speaking to me and saying how proud he was, looking at the things that we had done in Florida.”

PATRISSE CULLORS, co-founder of Black Lives Matter and its global network of chapters:

“The first time I was introduced to Congressman Lewis was through (the 1990 PBS docuseries) ‘Eyes on the Prize.’ And I was like, ‘Oh, that’s me.’ He was a young, radical Black man who was challenging not just the status quo in government, but also the older leadership in the movement. And I felt really moved by him. … What I witnessed significantly in ‘Eyes on the Prize’ was police terror and police brutality, and the way that it was used against the (Edmund) Pettus Bridge protesters … who were brutalized fighting for a more equitable America, for Black people in particular. And so, we fast forward to 2020, when we have been in the streets, and the same tactics of the police being used against us as a way to deter us from fighting for Black freedom. And yet, that never deterred Congressman Lewis. ... That is a deeply moving commitment to Black people.”

“I had the opportunity to staff (former Democratic presidential candidate) Sen. Elizabeth Warren, when we did the Edmund Pettus Bridge crossing, the Sunday before Super Tuesday, when I was working on her campaign. And (Lewis) came. It was like he was literally passing the torch to everyone who was there. ... That symbol of him coming from his sick bed, all the way to Selma was just so, wow, I’m actually getting emotional thinking about that. … He was so intentional and persistent about ensuring that people who are fighting know that they have his support and his admiration. He talked about how he admires how young people are showing up now.”

“I’ve been thinking about how important John Lewis’ life has been and will continue to be for weeks. And this moment still feels so freaking unfair. ... I remember the stories and encouragement. The never-wavering mandate. … I will remember a man who reminded us all that our optimism isn’t futile. That building a global neighborhood and a building beloved community are similar but not the same. … That’s the legacy. That’s the work. I’m so grateful, in this sea of grief, for such a divine human who loved us so deeply.”

“Looking at his work and his story, if I can even do half of that with my life then I’d consider it a worthy contribution. And it’s not about being perfect. But it is about saying, ‘I’m going to be in this for my entire life.’ I’m in this thing. Not for fame, not for glory. He could have done something else. His legacy is one of making a lifetime commitment to Black people.”

CHELSEA FULLER, spokesperson for the Movement for Black Lives and deputy communications director for Blackbird, which supports grassroots movements:

“In 2000, I was 12 years old and, like most children that age, struggling to comprehend the possibilities of who I could become. … He asked me if I liked school and what I wanted to do when I was all grown up. I told him I didn’t know, but that I liked to write and that I liked Black history, but didn’t think there was much I could do outside of being a professor. He took my hand and looked me square in the eye and said that loving my people and being a storyteller were not small things; but that they were powerful. … Congressman John Lewis encouraged me to see the power in stories about our people and our fight for freedom.”

Morrison is a member of the AP’s Race and Ethnicity team. Follow him on Twitter at https://www.twitter.com/aaronlmorrison.