SEBRING, Fla. (AP) — A man accused of fatally shooting five women at a small-town bank in Florida had dreamed of hurting classmates in high school and had long been fascinated with killing, police and a former girlfriend said Thursday.

The slayings did not appear to be part of a robbery, and Zephen Xaver had no apparent connection to the SunTrust branch or the four employees and one customer who were killed Wednesday, police said.

“We believe it was a random act,” Sebring Police Chief Karl Hoglund said Thursday at a news conference. “Aside from perhaps driving by and seeing it was a bank, we have no known evidence that he targeted this bank for any particular reason.”

If the gunman had driven 10 seconds farther, just one more driveway, the victims might have been Carol Davis, who manages a hair salon and spa, and her staff and customers.

Xaver, 21, was charged Thursday with five counts of premeditated murder. Just months ago, he moved from northern Indiana to Sebring, about 80 miles southeast of Tampa. He had recently quit his job as a prison guard trainee. 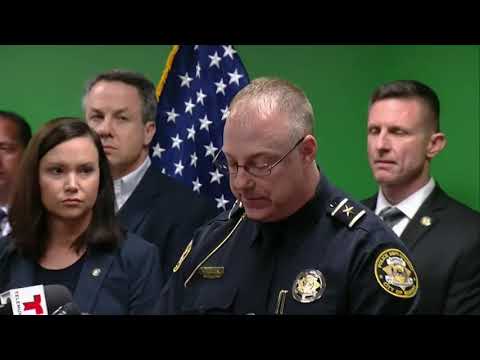 From police and witness accounts, he entered the bank about 12:30 p.m. when the five women were alone. The bank stands apart along U.S. 27, a busy four-lane highway in Sebring, a tourist and retirement city of 10,000 known for an annual endurance auto race that draws some of the world’s top drivers.

The victims were found lying face down, their bodies surrounded by shell casings, according to court documents. Six minutes after the attack began, Xaver called 911 and told dispatchers that he had killed everyone inside, Hoglund said.

Davis said she looked out her window and saw police officers everywhere, many carrying rifles. “I have never seen stuff like that except in the movies.”

Xaver refused to surrender and would not allow officers to reach the victims, Hoglund said. After more than an hour of negotiations, a SWAT team used an armored vehicle to break through the front doors. Xaver was found in a back office, and all the victims were dead, the chief said.

On Thursday, an Indiana police department released a 2014 report in which Xaver, then 16, said he had dreams of hurting other students in a classroom.

The report from the Bremen Police Department said Bremen High School Principal Bruce Jennings contacted police on Feb. 20, 2014, after Xaver reported having the dream the previous night and again during a nap at school. The report said Xaver’s mother agreed to take him to a behavioral health center. Police took no further action.

Authorities also released log entries of other incidents involving Xaver, including one in March 2017, when Michigan State Police advised that a girl was receiving messages from Xaver that indicated he was “possibly thinking of suicide by cop and taking hostages.”

Alex Gerlach, who identified herself as Xaver’s former girlfriend, said he’s long been fascinated with the idea of killing, but no one took her warnings about him seriously. For some reason, he “always hated people and wanted everybody to die,” Gerlach told WSBT-TV in South Bend, Indiana, near his former home in Plymouth, Indiana.

“He got kicked out of school for having a dream that he killed everybody in his class, and he’s been threatening this for so long, and he’s been having dreams about it and everything,” she said. “Every single person I’ve told has not taken it seriously, and it’s very unfortunate that it had to come to this.”

Gerlach told The Washington Post that Xaver said he purchased a gun last week and “no one thought anything of it” because he had always liked guns.

Xaver had no apparent criminal record in the areas where he’s lived in Indiana and Florida.

Tim Williams said his sister-in-law was a devout Christian “and family to everyone she knew.” She had recently started working at the bank, and she quickly came to love the job and her co-workers, he said.

“We do not know what was going on in the mind of the individual who committed this atrocious act, but we do know he was influenced by the darkness in this world,” Williams said. “We will not try to understand the darkness, but with God’s help we will overcome it.”

Lopez’s family posted a note on their door asking not to be disturbed. The Associated Press could find no contact information for Watson’s family.

A fourth victim was identified when her husband spoke with NBC News. Maine Montague said he and his wife, 31-year-old Jessica Montague, had a 3-year-old child.

In compliance with a newly passed victims’ rights law in Florida, police withheld the name of the fifth victim at the family’s request.

Xaver was arrested in a beige T-shirt depicting the Four Horsemen of the Apocalypse. On Thursday, he wore a black-and-white striped prison uniform as he was appointed a public defender and ordered held without bond.

His father said he’s “heartbroken for the victims” and that his son “wasn’t raised to be like this.”

“He’s always been a good kid. He’s had his troubles, but he has never hurt anyone ever before. This is a total shock,” Josh Xaver told CNN. The AP sought interviews with both of Xaver’s parents but received no immediate response.