GOLETA, Calif. (AP) — The Latest on a Southern California wildfire (all times local):

All evacuation orders and warnings have been lifted for Southern California communities that were threatened by a mountain wildfire this week and then faced a risk of debris flows as a storm moved in.

Most of the 5,500 people who fled when the fire broke out Monday were permitted to return home Tuesday.

Overnight, however, the county issued a warning for residents in and below the fire area to be ready to evacuate in case of debris-laden runoff from a storm that doused the fire.

Rain is falling on Southern California coastal mountains scorched by a wildfire this week.

Heavy rain fell in pre-dawn hours Wednesday in the rugged San Ynez Mountains above the cities of Santa Barbara and Goleta, but the rain is now lighter.

KEYT-TV reports there is still the smell of smoke in the fire area.

The fire erupted Monday afternoon and forced thousands of residents to flee as it grew to about 6.7 square miles (17.3 square kilometers).

Most of those evacuees have been allowed to return home, but Santa Barbara County late Tuesday warned residents in and below the burn area to be prepared to leave in case of debris flows from the storm. 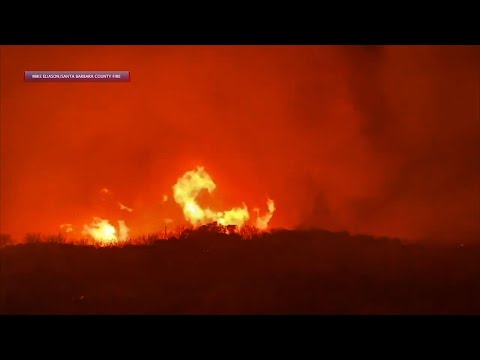 In January 2018, the Santa Barbara-area community of Montecito was ravaged by debris flows from freshly burned slopes, killing 23 people.

Firefighters are hoping rainy weather will douse a wildfire that threatens thousands of homes in the coastal foothills north of Los Angeles.

The wind-whipped fire that erupted Monday raged through tinder-dry, brushy canyons in the same area where a 1990 blaze destroyed more than 400 homes.

No homes have burned but officials say about 2,400 homes and other buildings in the Goleta area remain threatened.

The good news is that the National Weather Service expected rain to hit the region before dawn Wednesday, with up to an inch possible as the storm moves through.

Forecasters say there’s a chance the rain could cause some debris flows in the fire-denuded area but they don’t expect any serious mudslides.