FBI chief: No evidence of illegal spying on Trump campaign

WASHINGTON (AP) — FBI Director Chris Wray said Tuesday that he does not consider court-approved FBI surveillance to be “spying” and said he has no evidence the FBI illegally monitored President Donald Trump’s campaign during the 2016 election.

His comments at a Senate Appropriations subcommittee hearing broke from Attorney General William Barr, who has described as “spying” FBI surveillance during its investigation into potential collusion between the Trump campaign and Russia. Barr has not said such surveillance was necessarily improper, but Trump nonetheless seized on those comments to suggest his campaign was spied on in an illegal and unprecedented act.

Asked by Sen. Jeanne Shaheen, D-N.H., if he would say that the FBI is “spying” when it investigates suspected terrorists and mobsters while following “investigative policies and procedures,” Wray replied, “Well, that’s not the term I would use.” 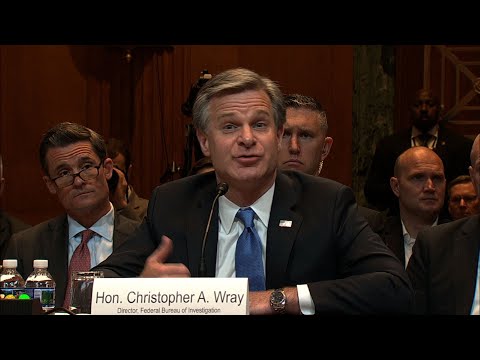 Wray declined to discuss in detail the FBI’s investigation into the Trump campaign because of an ongoing Justice Department inspector general probe into the origins of the Russia inquiry. Barr has said he expects the watchdog report to be done in May or June.

But asked whether he was aware of evidence that the FBI had illegally spied on the Trump campaign, Wray said, “I don’t think I personally have any evidence of that sort.”

Barr is investigating whether there was a proper basis for the FBI to open a counterintelligence investigation into ties between the Trump campaign and Russia. The recently concluded investigation from special counsel Robert Mueller did not find a criminal conspiracy between the campaign and the Kremlin to tip the outcome of the 2016 presidential election.

“The attorney general is seeking to understand better the circumstances at the department and the FBI relating to how this investigation started, and we’re working to help him get that understanding,” Wray said about the Justice Department’s review. “I think that’s part of his job and part of mine.”

Barr didn’t specify what he meant when he said he believed there had been spying on the Trump campaign, though he also said that he did not mean the word in a negative way. At a hearing last week, he described “spying” as a “good English word” encompassing “all forms of covert intelligence operations” and said he wouldn’t back away from using it.

The FBI obtained a secret surveillance warrant in the fall of 2016 to monitor the communications of former Trump campaign aide Carter Page, whose interactions with Russians several years earlier had raised law enforcement suspicions even before he joined the campaign.

The New York Times reported last week that the FBI sent a female government investigator posing as a research assistant to speak with ex-Trump campaign adviser George Papadopoulos, who was told by a Maltese professor in the spring of 2016 that Russia had “dirt” on Democrat Hillary Clinton in the form of stolen emails.

In his book about his entanglement in the Russia probe, “Deep State Target,” Papadopoulos wrote that the woman, who identified herself as Azra Turk, asked him about his work with the Trump campaign.

“She wants to know: Are we working with Russia?” he wrote. He described her question as “creepy” and said he told her he had “nothing to do with Russia.”

Papadopoulos later pleaded guilty to lying to the FBI about his interactions with the professor, Joseph Mifsud, and was sentenced to 14 days in prison.