HANOI, Vietnam (AP) — The moment was meant to be a grand diplomatic triumph, a headline-dominating spectacle that could lead to the disarmament of a dangerous nation while delivering a vital political victory.

Instead, President Donald Trump’s high-stakes summit with North Korea’s Kim Jong Un in Vietnam on Wednesday was in danger of being upstaged by a monumental betrayal unfolding half a world away in Washington.

Hours after Trump sat face-to-face with Kim in Vietnam, his former personal attorney, Michael Cohen, sat before Congress and testified that his longtime boss was a “conman” and a “racist” who lied about having advanced knowledge of Wikileaks plans to release an opponent’s stolen emails.

The spectacle was proof the Trump presidency has not yet exhausted its ability to surprise. As the president staged a historic summit abroad, a former confidante delivered testimony, both detailed and taunting, that threatened to humiliate the president and undermine his foreign policy goals.

The drama drew Trump’s attention even amid sensitive denuclearization talks. Even before the hearing began, the president unleashed an attack on his former fixer, who has pleaded guilty to lying to Congress and campaign finance violations and has been sentenced to three years. In a tweet, Trump downplayed Cohen’s influence and claimed he was “lying in order to reduce his prison time.” 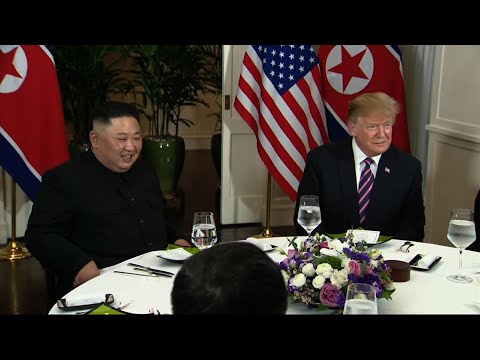 Later, as he sat for a photo with Kim, Trump bristled at reporters’ questions about Cohen. After the event, the White House took the extraordinary step of barring four U.S. reporters, including one from The Associated Press, from Trump’s dinner with Kim, citing the “sensitivities” of the meeting.

Democrats consider Cohen their star witness as they kick off investigations into Trump’s business practices, presidential campaign and embattled charitable foundation, including any payments relating to efforts to influence the 2016 election. He was initially due on Capitol Hill earlier this month, but his appearance was delayed. The president’s son Donald Jr. accused Democrats of timing the hearing to interfere with Trump’s trip abroad.

Cohen’s testimony appeared designed to get under Trump’s skin.

Reading from his prepared remarks, Cohen said Trump instructed him to threaten schools that Trump attended to prevent release of his grades or SAT scores. Cohen also described discussing the Vietnam War with his former boss, who didn’t serve because he received a medical deferment for bone spurs. But Cohen says Trump could not provide any medical records and said: “You think I’m stupid, I wasn’t going to Vietnam.”

Added Cohen, addressing the president thousands of miles away: “I find it ironic, President Trump, that you are in Vietnam right now.”

The hearing began just before midnight in Hanoi. It was not clear whether Trump stayed up late to watch. The president did spend some of the downtime at his hotel before his dinner with Kim watching the coverage of Cohen’s prepared testimony, which was released the evening before his Capitol Hill appearance.

In the written testimony released in advance of the appearance, the president’s former lawyer and fixer acknowledged he organized a cover up of potentially damaging allegations of infidelity, which Trump denies, and listened to Trump’s racist remarks. Cohen claimed Trump was told by an associate, Roger Stone, that WikiLeaks had emails damaging to his Democratic rival Hillary Clinton’s campaign and planned to release them. Trump has previously denied knowing anything about Stone’s communications with WikiLeaks.

Cohen’s testimony on the very day Trump met with Kim is a particularly acute moment of domestic humiliation for a president engaged in foreign diplomacy, but it wasn’t the first, said Princeton University history professor Julian Zelizer.

Richard Nixon, Bill Clinton and Ronald Reagan, all endured trouble at home that hampered their foreign policy aims. Zelizer noted that Clinton ordered air strikes on Iraq in 1998 as an impeachment vote loomed in the House of Representatives. In that case, critics accused Clinton of staging a distraction — a concern that has been raised regarding Trump’s moves with North Korea.

“The presidency doesn’t stop, even when scandal hits,” said Zelizer. “The one thing that’s different is that he’s tweeting. In ’98 the president said, ‘I’m focused on foreign policy,’ and he tried to act presidential.”

Added Zelizer of Trump: “I think he is going to connect the stories himself.”

The president’s two-day summit with Kim in Hanoi began with a highly choreographed greeting and photo-op, followed by a dinner, while the serious negotiating was set for Thursday. But Cohen shadow’s reached across the Pacific, as Trump was asked at the summit by an Associated Press reporter if he had any response to Cohen’s testimony.

The president shook his head and scowled.

And a short time later, White House press secretary Sarah Sanders approached the press and said that no reporters would be allowed into the dinner. That was an abrupt change from the initial plan issued by the White House, which had said that access would be granted to the usual 13-person group of reporters, known as the traveling press pool, who follow the president to every event.

Hours after Trump’s day ended, Cohen remained present. Several White House staffers, including chief of staff Mick Mulvaney, retired to the hotel lobby for a drink. But on the TVs behind them, Cohen’s testimony beamed in from thousands of miles away.