Gaza’s Hamas rulers say Egypt has brokered a cease-fire to end the latest round of fighting with Israel.

Hamas media says the cease-fire went into effect at 10 p.m. (2000 GMT) Monday. There was no immediate Israeli reaction.

The announcement came shortly after several rockets were fired into Israel, setting off air raid sirens throughout the south.

Israel carried out a series of airstrikes across Gaza earlier Monday in response to a rocket attack that struck a home and wounded seven Israelis in central Israel.

Israeli media report at least 10 missiles fired toward the southern Israeli town of Sderot late Monday. There are no immediate reports of casualties.

The latest escalation of violence began early Monday when a rocket fired from Gaza struck a home in central Israel, wounding seven people. Israel has vowed to respond “forcefully,” raising the prospect of a fourth war between Israel and Gaza’s militant Hamas rulers. 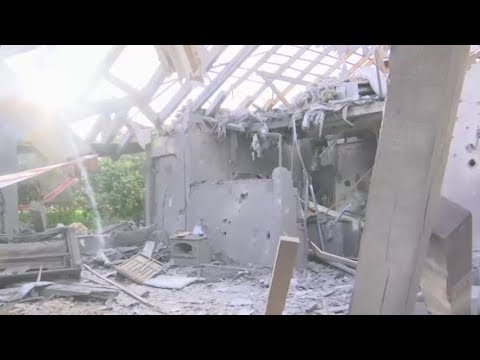 The airstrike took place moments after Israel fired a pair of warning shots at the office, a tactic that Israel uses to get people to evacuate targeted buildings.

There were no immediate reports of casualties.

Haniyeh had gone into hiding earlier Monday, fearing retaliation after a rocket fired from Gaza struck an Israeli home and wounded seven people in central Israel.

In a written statement earlier Monday, Haniyeh said the Palestinian people “will not surrender” and its militant factions “will deter the enemy if it exceeds the red lines.”

The sirens are the first sign of renewed rocket fire out of the Gaza Strip following a series of Israeli airstrikes.

Israel struck targets throughout Gaza late Monday in response to a rocket attack that struck a house and wounded seven people in central Israel.

An Israeli airstrike destroyed another multi-story building that the military said was a secret Hamas headquarters.

The Gaza Health Ministry says one Palestinian was wounded in an Israeli airstrike.

Col. Ronen Manelis, an Israeli military spokesman, says the Israeli barrage is “expected to continue for hours to come.”

The U.N. says Secretary-General Antonio Guterres is “gravely concerned” at the latest developments in Gaza and is urging Israel and Gaza’s Hamas rulers “to exercise maximum restraint.”

U.N. spokesman Stephane Dujarric called Monday’s firing of a rocket from Gaza that hit a house in central Israel, wounding seven people, “a serious and unacceptable violation.” He said the U.N. is monitoring the latest reports of Israeli strikes on Gaza.

Dujarric said the U.N. is continuing to work with Egypt and other concerned parties to try to de-escalate the situation. He says “further escalation is likely to make an already bad situation worse, in particular for civilians in and close to Gaza.”

An Israeli airstrike has destroyed a multi-story building in Gaza City that housed a Hamas-affiliated insurance company.

The Israeli military issued a statement Monday saying the building was “a secret headquarters of the Hamas terror organization” that was used by the Islamic militant group’s intelligence agencies.

The powerful explosion scattered debris over a large area of the city. Prior to the main airstrike, aircraft dropped two smaller missiles on the roof of the building as a warning.

Hamas’ leader says his group will respond if Israel retaliates too forcefully to an overnight rocket strike.

Ismail Haniyeh said in a written statement Monday that the Palestinian people “will not surrender” and its militant factions “will deter the enemy if it exceeds the red lines.”

Haniyeh’s statement came as Israel began striking targets in the Gaza Strip in response to the early morning rocket attack, which wounded seven people in a small town north of Tel Aviv.

Hamas’ leaders went into hiding, police and security installations were evacuated and hospitals in Gaza were on alert in anticipation of the Israeli airstrikes.

Israel’s prime minister says his country has begun responding “forcefully” to a rocket attack from the Gaza Strip.

Speaking at the White House, Benjamin Netanyahu said he will “not tolerate” the rocket strike, which struck a home in central Israel early Monday and wounded seven people.

“As we speak,” he said, “Israel is responding forcefully to this wanton aggression.”

He says Israel will do “whatever we must do” to defend itself.

Israel’s military says it has started striking Hamas targets in the Gaza Strip after a rocket hit a house in central Israel earlier in the day, wounding seven people.

The barrage begins as Israeli Prime Minister Benjamin Netanyahu is set to meet with President Donald Trump at the White House.

Israeli authorities are taking precautions ahead of a likely military retaliation against the Gaza Strip’s Hamas rulers after a rocket struck an Israeli house, wounding seven.

Israeli media are reporting that flights to and from Israel’s main international airport were diverted from their normal flight paths, and train services to several southern cities near the Gaza Strip have been canceled. The Israeli military has also closed several roads around Gaza.

Monday’s rocket was the second launched toward central Israel in recent weeks, and prompted Israeli Prime Minister Benjamin Netanyahu to cut short a trip to Washington.

The U.N. Mideast envoy has condemned the firing of a rocket from Gaza into Israel.

Nickolay Mladenov called the overnight strike, which wounded seven people, “absolutely unacceptable.” He tweeted Monday that the U.N. is working “intensely” with Egyptian mediators and “all sides” to stave off a looming escalation but that “the situation remains very tense.”

Efforts by Egypt and the U.N. to restore a cease-fire between Israel and Gaza’s Hamas rulers have halted bouts of cross-border violence in the past.

The Israeli military says it will halt agricultural work near the security fence that separates Israel from the Gaza Strip “to improve readiness” for an escalation after an overnight rocket attack.

The military said Monday it would block routes and areas on the Israeli side of the fence and requested that residents “follow security instructions as long as necessary.” Thousands of acres of Israeli farmland lie adjacent to the Gaza frontier.

The World Health Organization has delivered medical supplies to the Gaza Strip to address the blockaded territory’s growing trauma and emergency care needs.

The organization said on Monday that the aid shipment, donated by the European Union, would cover the needs of up to 120,000 patients injured during demonstrations and protests.

It cited shortages of medical supplies in Gaza’s stressed health care system, exacerbated by recent hostilities. Close to 190 Palestinians have been killed by Israeli fire during Hamas-orchestrated weekly rallies along the Israel-Gaza border fence.

WHO says it’s scaling up its trauma care resources and appealing for funding ahead of a potential escalation and the one year anniversary of the protest movement at the end of the month.

A Palestinian journalist who exposed Gaza’s government corruption has been acquitted by a Hamas-run court in the coastal territory.

The 34-year-old Hajar Harb had appealed a six-month prison term and fine on charges of libel and slander over her reporting. Rights groups had criticized the case as a violation of free speech in the enclave.

Harb celebrated her acquittal Monday, calling it “the most beautiful thing.”

Rights groups charge that fair litigation is not guaranteed in Hamas’ judiciary system. Hamas seized control of Gaza from the Palestinian Authority in 2007.

The Israeli military says it is reinforcing troops along the Gaza border and calling up reserves after a rocket attack on an Israeli home.

Maj. Mika Lifshitz, a military spokeswoman, says two armor and infantry brigades were being mobilized and that there is a limited drafting of reserves underway following the attack early on Monday.

She says the military has concluded that Gaza’s militant Hamas rulers fired the rocket from one of their launching pads in the southern part of the coastal strip, near Rafah. She says it was a self-manufactured rocket with a range of 120 kilometers, or about 75 miles.

Netanyahu described Monday morning’s rocket launch that struck a home in central Israel as a “criminal attack” and vowed to strike back hard. He says he will return to Israel to handle the crisis shortly after meeting with President Donald Trump on Monday.

An Israeli rescue service said the rocket from the Gaza Strip struck a house in central Israel, wounding seven people.

The sounds of air raid sirens woke up the residents of the residential Sharon area, northeast of Tel Aviv, sending them scurrying to bomb shelters. A strong explosion followed.

An early morning rocket from the Gaza Strip has struck a house in central Israel on Monday, wounding seven people, raising concerns the attack could set off another round of violence shortly before the Israeli election.

The sounds of air raid sirens woke up the residents of the residential Sharon area, northeast of Tel Aviv, on Monday, sending them scurrying to bomb shelters. A strong sound of an explosion followed.

The Israeli military says it identified a rocket fired from the Gaza Strip. Israeli police say the rocket hit a residential home in the community of Mishmeret, north of the city of Kfar Saba, setting off a fire and destroying the house.

The Magen David Adom rescue service said it was treating seven people, including two women who were moderately wounded. The others, including two children and an infant, had minor wounds.