SAO PAULO (AP) — The stabbing of a leading Brazilian presidential candidate jolted an already wildly unpredictable campaign to lead Latin America’s largest nation, with doctors saying Friday that Jair Bolsonaro will be hospitalized for at least a week.

Supporters of the far-right congressman who wants to crack down on crime said the attack would only boost his chances in next month’s election, but it was unclear when he would be able to return to campaigning in person.

A knife-wielding man whose motive was unknown stabbed Bolsonaro during a rally Thursday in Juiz de Fora, a city about 125 miles (200 kilometers) north of Rio de Janeiro, as he was being carried on the shoulders of a supporter.

Bolsonaro, 63, suffered intestinal damage and serious internal bleeding, said Dr. Luiz Henrique Borsato, one of the surgeons who operated on the candidate. He was in serious but stable condition and would remain in intensive care for seven to 10 days, Borsato said.

The candidate was transferred Friday to a premier hospital in Sao Paulo, Brazil’s largest city. Supporters outside the hospital carried a giant inflatable doll of Bolsonaro dressed in a formal suit with a sash that said “President.” 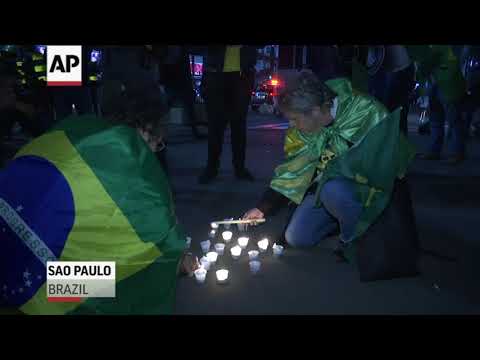 “No matter what you think about him, he did not deserve this,” said Mauro Rodrigues, owner of a construction business who went to the hospital to support Bolsonaro. “It will definitely increase his chances of winning the election because people will be more sympathetic toward him.”

The attack is likely to have a major impact on the remaining four weeks of the campaign, from how candidates interact with supporters to their message.

For Bolsonaro, there will be questions about his physical ability to campaign — a key factor in a country slightly larger than the continental United States — as well as whether the attack will give him a boost among voters.

“He probably won’t go back to the streets during this campaign, so he can’t do it, but we can,” his son, Flavio, said in a video posted on Facebook. “More than ever I count with each one of you.”

Bolsonaro’s vice presidential running mate, retired Gen. Hamilton Mourao, told reporters that the candidate will “come out of this process stronger than he went in.”

The sentiment was echoed by Flavio Bolsonaro, who tweeted: “Jair Bolsonaro is stronger than ever and ready to be elected President of Brazil in the 1st ROUND!”

About a dozen candidates are competing in the Oct. 7 voting. If no one wins an outright majority, a second round will be held Oct. 28.

In a video posted on the Facebook page of a senator who visited him in the hospital, Bolsonaro thanked his doctors in a weak and scratchy voice and said: “I never did harm to anyone.”

He described a painful wound, saying he had worried about an attack on the campaign trail.

“I was preparing for this sort of thing. You run risks,” he said.

The leader in the polls is former President Luiz Inacio Lula da Silva, but he is serving a 12-year sentence for corruption and has been barred from running. Bolsonaro is currently second, and while he has enthusiastic followers, his disapproval rating is higher than any other major candidate.

Friday was Independence Day in Brazil, and Bolsonaro had planned to attend a military parade in Rio de Janeiro.

The former army captain openly praises Brazil’s 1964-85 dictatorship and has long argued the country is in chaos and needs a strong hand. That message has resonated with Brazilians, but his often derogatory comments about women, blacks and gays have also repulsed many.

The attack “will turn into a dispute between the left and right,” said Mauricio Santoro, a political science professor at Rio de Janeiro’s state university. “It’s time that all presidential candidates make a declaration together to stop the aggressiveness.”

Videos on social media show Bolsonaro on the shoulders of a supporter, looking out at the crowd and giving a thumbs-up with his left hand. He suddenly flinches and then goes out of view. Other videos show supporters carrying him to a car and hitting a man who was apparently the attacker.

The suspect, identified by authorities as 40-year-old Adelio Bispo de Oliveira, was arrested within seconds.

The internet news portal G1 posted cellphone video, apparently obtained from police, of de Oliveira being questioned. Sitting on the floor with his hands cuffed behind him, a voice can be heard asking him who had sent him to attack Bolsonaro.

“I didn’t say anybody sent me,” said de Oliveira. “He who sent me was God on high.”

Luis Boudens, president of the National Federation of Federal Police, told The Associated Press that agents believed “they were not dealing with a mentally stable person.”

Eraldo Fabio Rodrigues de Oliveira, who is married to a niece of the suspect, told the newspaper Folha de S.Paulo that he appeared to be “disturbed” and would often lock himself in a shed when he visited his family.

“I can’t say he was crazy, but, from the way he acted, he wasn’t normal, no,” the relative was quoted as saying.

Lt. Col. Marco Rodrigues of the Minas Gerais state police told reporters that de Oliveira, who was once affiliated with a leftist party, said he acted because he disagreed with Bolsonaro. G1 quoted a lawyer for de Oliveira, Pedro Augusto Lima Possa, as saying his client did not mean to kill the politician, only wound him.

Federal police said another suspect was detained in connection with the attack and questioned. That suspect was released overnight but remains under investigation.

Minister of Public Security Raul Jungmann said the number of federal police providing security to candidates would be increased because of the attack, adding that Bolsonaro had been warned against launching himself into crowds as he did Thursday, according to the government-run news agency Agencia Brasil. Currently, 80 federal police protect five presidential candidates who requested security, and 21 were assigned to Bolsonaro, according to Jungmann.

Brazilians surged onto social media to argue over whether the attack supports Bolsonaro’s assertions that the country is off the rails or if his heated rhetoric contributed to inciting the attack.

Flavio Bolsonaro, a state legislator who is running for a seat in the federal Senate, rejected the idea that his father incited the attack, saying the candidate was engaged in a campaign of ideas. He said the mainstream media bear some responsibility, accusing them of portraying his father as a “monster.”

“They made Bolsonaro a martyr,” said Jonatan Valente, a student who joined a small vigil in Sao Paulo for the wounded candidate. “I think the left shot itself in the foot because with this attack they will end up electing Bolsonaro.”

After more than four years of revelations of widespread political corruption, anger is running high.

Despite being a congressman since 1991, Bolsonaro has harnessed much of the anger and presented himself as a maverick who will clean up a corrupt system. He also promises to confront a surge in crime, in part by giving police a freer hand to shoot and kill while on duty. He has promised to fill his government with current and former military leaders.

It was not the first incident of political violence this year. In March, while da Silva was campaigning in southern Brazil before his imprisonment, gunshots hit buses in his caravan, although no one was hurt. That same month, Marielle Franco, a councilwoman in Rio de Janeiro, was shot to death along with her driver.

“The campaign will become much more emotional than it already was,” said Marcos Troyjo, co-director of the BRICLab at Columbia University. “Ideas will take a back seat.”