Solemn air on campus ahead of memorials for shooting victims

CHARLOTTE, N.C. (AP) — The campus has turned quiet. Flowers and candles fill the steps outside the building where two students were killed. Exams have been postponed or canceled.

For students, professors and administrators, Tuesday’s shooting that left two dead and four wounded at the University of North Carolina-Charlotte has altered what they thought was a safe space, a home away from home.

“My gut tells me that was one of those moments where everything from this point on will be different. I can’t imagine us going unaltered. It’s a 9/11, it’s a Kennedy assassination, it’s a Challenger disaster, it’s a death of a family member kind of moment,” said Tricia Kent, an archivist who has spent 33 years at the school.

Creech was in the classroom where the six students were shot and ran to save his life when the gunman opened fire. But the medic with the National Guard stayed close to the building and gave first aid to a wounded classmate.

“I am alive and had angels watching over me, for sure. I’m just not going to let a second chance a life like this get away from me,” said Creech, who has seen a therapist in the two days since the shooting. Going forward, Creech said, he plans to work on getting first aid training for more people in college. 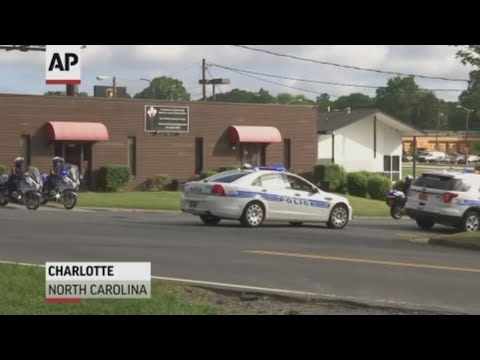 Adam Johnson, the lecturer teaching the class, wrote on his blog Thursday that the shooter had been registered for the course and seemed engaged in the material but stopped coming to class in January. He said he ran into the gunman, whom he refused to call by name on his blog post, shortly afterward and told him it was a shame he had left the course. That was the last time he saw him.

The man charged in the shooting, Trystan Andrew Terrell, had been a student at the university but withdrew before the end of this semester, officials said.

While Terrell was skipping his court appearance, the body of one of the slain students hailed as a hero arrived back in his hometown with a police escort.

Dozens of people stood on streets with U.S. flags at the end of the 150 mile (240 kilometer) journey west from Riley Howell’s college home in Charlotte to his mountain hometown of Waynesville. Howell’s mother hugged every police officer in the procession, television footage showed.

Visitation will be Saturday and a memorial service Sunday for Howell, 21, who Putney said saved a number of lives by charging and tackling the gunman.

Creech said Howell is “an absolute hero” whose memory will “go on forever.”

“He definitely gave us extra time to get out,” Creech said.

Jared Jackowitz was in the same classroom, where four of the seven members of his presentation group were shot — one, 19-year-old Ellis R. Parlier, died. Jackowitz said the students in the class and their professor have been supporting one another in the aftermath.

Their professor sent an email saying “do not do any more work for this class. Don’t even think about doing it,” Jackowitz said.

In the short term, the university is making all final exams optional. Students happy with their grades on the last day of class can keep them and not come back to campus. For students who want to take course ending tests, the school is rescheduling exams for next week.

Student Ryan Lamm, who helps out with computer issues in Kennedy Hall, said the atmosphere at the 30,000 student university has shifted.

“It’s really solemn and eerie because you see anyone on campus, and they know what you know. You can talk about anything, but it’s eventually going to be like, ‘How are you doing? Are you OK?’” Lamm said.

UNC-Charlotte Chancellor Philip Dubois has promised a memorial to the student victims as well as a full review of what happened Tuesday and what can be done to make his campus safer.

But he said Wednesday that he can only do so much with an urban college.

“I don’t believe you can stop a determined assailant and still have an open campus,” Dubois said.