No end in sight for Minshew Mania after game-winning drive

Chark answered questions and posed for pictures while playfully stroking his stick-on ’stache.

It was the latest indication that Minshew Mania is still growing _ and there’s no end in sight.

Minshew Mania has spread to the Jaguars’ locker room pic.twitter.com/So2OuZbVRo

“There’s a lot of bad mustaches out there right now,” Minshew said. “But hopefully we’ll get them right.”

Five guys in Jacksonville’s equipment room are growing bushy mustaches to mimic Minshew’s unique look. Chark said he’d love to join them and grow his own facial hair, but “everybody don’t have that talent.” So he went the faux route and bought a black mustache at a Halloween store.

Minshew was amused even though he’s become immune to most gestures _ whether they’re in the stands, on billboards or even in his own locker room. About the only thing that caught his eye lately was seeing his image plastered on T-shirts around town.

“It’s pretty weird, man, seeing yourself on a shirt,” he said. “But it’s definitely a good thing.”

The Jaguars (2-2) play at Carolina (2-2) on Sunday, and Minshew is expected to make his fourth consecutive start despite a sprained left knee .

He tweaked his knee on the first play of Jacksonville’s game-winning drive at Denver. Minshew got up limping and still managed to move the offense 60 yards in the final 90 seconds, setting up Josh Lambo’s 33-yard field goal that gave the Jags a 26-24 victory .

The comeback only added to Minshew’s growing popularity.

The sixth-round draft pick from Washington State is the first quarterback in the last 30 years and just the second in NFL history (Washington’s Mark Rypien, 1998) to post a passer rating of at least 95 in his first four games. He leads all rookies with seven TD passes and has completed 69.4% of his throws. He’s been sacked 10 times, but has just two turnovers: an interception on a tipped ball and a fumble.

He also was named the NFL’s offensive rookie of the month for September.

His path to the pros took him from Troy to Northwest Mississippi Community College to East Carolina and finally to Washington State, where he threw for nearly 5,000 yards and 38 touchdowns in 2018.

The Jaguars selected “the Mississippi Mustache” with the 178th overall pick and talked more about him being an eventual coach than an immediate starter. But he’s turned heads since replacing Nick Foles (broken collarbone) early in the season opener.

His quirky fashion sense, which includes jean shorts, Hawaiian shirts, a thick headband, a throwback leisure suit and ever-evolving facial hair, made him a fan favorite shortly after draft night. His laid-back personality and quick wit made him even more beloved in small-market Jacksonville, which has spent most of the past two decades longing to find a franchise quarterback.

“He doesn’t really focus on the outside noise,” cornerback A.J. Bouye said. “He stays focused on the task at hand. He knows it’s only the first quarter of the season _ we still got a long way to go _ and to really not buy into the hype or anything like that.”

The hype has been hard to ignore.

An adult entertainment site offered Minshew an endorsement deal that would have paid him up to $1 million. The site invited Minshew to lead a weekly exercise class while wearing only a jock strap, which is his preferred attire for pregame stretches in the locker room.

Minshew revealed last week that he once took a hammer to his right hand at East Carolina in a misguided attempt to extend his college career.

He filmed a skit for ESPN’s pregame show that featured Uncle Rico from the 2004 off-beat comedy “Napoleon Dynamite.” Rico Dynamite is an overly nostalgic former athlete trying to get over his failed dreams of NFL stardom.

“If only he could get in at the end of the game maybe it would have been different,” Minshew said. “But he did what he could.” 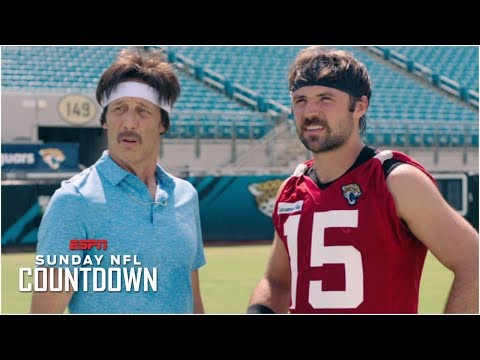 The Jaguars are doing what they can to benefit from Minshew Mania, too.

The team is offering a “Minshew Mini Pack” for the next two home games. The package includes tickets to games against New Orleans (Oct. 13) and the New York Jets (Oct. 27) as well as a headband, a mustache and the opportunity to get a photo taken on the field wearing the gear. Prices range from $41 to $600.

Believe in the power of the &#39;stache. pic.twitter.com/Jlpgk40NHF

“He never seems to let all the hype get to him,” Chark said. “He comes in and he works every day. That’s one of the reasons why wearing the mustache and things like that are OK because he doesn’t let it get to him.

“He likes to play football. You can’t ask much more from him than that.”