A woman’s killing by multiple feral hogs outside of a rural Texas home where she worked as a caretaker was a rare deadly attack by the animals, authorities said.

Christine Rollins, 59, was attacked early Sunday in the small town of Anahuac, located more than 40 miles (65 kilometers) east of Houston. Chambers County Sheriff Brian Hawthorne said Monday that the attack happened around 6 a.m., when it was still dark outside.

When Rollins didn’t enter the home where she worked at the usual time, the 84-year-old woman she cared for went outside and found Rollins in the yard, the sheriff said. She was lying between her own vehicle and the front door of the home, he said.

Deputies arrived to find Rollins dead with multiple injuries. Because there were different sizes of bites on her body, investigators think multiple hogs attacked her, Hawthorne said.

“This is a very rare incident,” the sheriff said, adding that the coroner said Rollins bled to death after the attack by feral hogs.

Experts say that attacks on humans by feral hogs are rare, and fatalities even rarer. A 2013 study by John J. Mayer of the Savannah River National Laboratory looked at attacks by wild pigs around the world from 1825 to 2012. The study found only four fatal attacks in the U.S., and three of those were from animals that were wounded while being hunted. 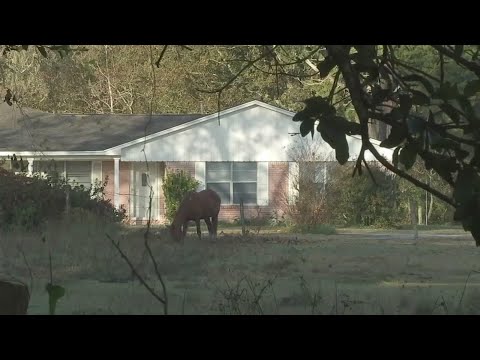 Mike Bodenchuk, the state director of Texas Wildlife Services, said that while attacks are rare, the hogs, which are more active in the dark, are equipped to do damage, with sharp tusks that cause slashing injuries.

Jim Cathey, an associate director for the Texas A&M Natural Resources Institute, said it’s not uncommon for a hog to weigh more than 200 pounds (90.72 kilograms). He said they are stoutly built and powerful when they rear back with their heads. “It’s a very quick, powerful motion,” he said.

Hawthorne said the couple living at the home where Rollins was heading to provide care have a residence that sits on property located near about a dozen acres of pasture and woods. It appears Rollins, who lived about 30 miles (48 kilometers) to the north in Liberty, arrived at her usual time, got out of her car and locked it before she was attacked, the sheriff said.

Tony Sandles Jr. said Tuesday that his mother-in-law, Rollins, was like family to the people she cared for. He said she’d been a caretaker for about 40 years — cooking, cleaning, housesitting and keeping those she cared for company. He said their homes became like her own.

“She was the most amazing woman that you could ever meet,” Sandles said.

He said Rollins loved sports and was a lifelong San Francisco 49ers fan despite being born and raised in Southeast Texas.

Sandles said his mother-in-law wouldn’t have gotten out of her car if she had known the hogs were near.

Bodenchuk said it’s estimated that of the about 6 million feral hogs in the U.S., about 3 million are in Texas. He said they’re unprotected in Texas, and landowners are free to kill them.