SAN FRANCISCO (AP) — Facebook removed more than 3 billion fake accounts from October to March, twice as many as the previous six months, the company said Thursday.

Nearly all of them were caught before they had a chance to become “active” users of the social network.

In a new report, Facebook said it saw a “steep increase” in the creation of abusive, fake accounts. While most of these fake accounts were blocked “within minutes” of their creation, the use of computers to generate millions of accounts at a time meant not only that Facebook caught more of the fake accounts, but that more of them slipped through.

As a result, the company estimates that 5% of its 2.4 billion monthly active users are fake accounts, or about 119 million. This is up from an estimated 3% to 4% in the previous six-month report.

The increase shows the challenges Facebook faces in removing accounts created by computers to spread spam, fake news and other objectionable material. Even as Facebook’s detection tools get better, so do the efforts by the creators of these fake accounts. 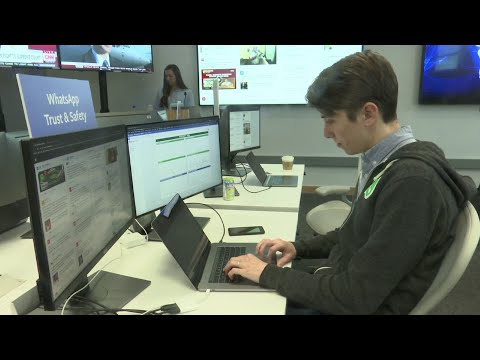 The new numbers come as the company grapples with challenge after challenge, ranging from fake news to Facebook’s role in elections interference, hate speech and incitement to violence in the U.S., Myanmar, India and elsewhere.

Facebook also said Thursday that it removed 7.3 million posts, photos and other material because it violated its rules against hate speech. That’s up from 5.4 million in the prior six months.

The company said it found more than 65 percent of hate speech on its own, before people reported it, during the first three months of 2019. That’s an improvement from 52 percent in the third quarter of 2018.

Facebook is under growing pressure to combat hate on its platform, as material continues to slip through even with recent bans of popular extremist figures such as Alex Jones and Louis Farrakhan.

Facebook employs thousands of people to review posts, photos, comments and videos for violations. Some things are also detected without humans, using artificial intelligence. Both humans and AI make mistakes and Facebook has been accused of political bias as well as ham-fisted removals of posts discussing — rather than promoting — racism.

A thorny issue for Facebook is its lack of procedures for authenticating the identities of those setting up accounts. Only in instances where a user has been booted off the service and won an appeal to be reinstated does it ask to see ID documents.

While some have argued for stricter authentication on social media services, the issue is thorny. People including U.N. free expression rapporteur David Kaye say it’s important to allow pseudonymous speech online for human rights activists and others whose lives could otherwise be endangered.

Dipayan Ghosh, a former Facebook employee and White House tech policy adviser who is currently a Harvard fellow, said absent greater transparency from Facebook there is no way of knowing whether its improved automated detection is doing a better job of containing the disinformation problem.

“We lack public transparency into the scale of disinformation operations on Facebook in the first place,” he said.

And even if just 5 million accounts escaped through the cracks, Ghosh added, how much hate speech and disinformation are they spreading through bots “that subvert the democratic process by injecting chaos into our political discourse?”

“The only way to address this problem in the long term is for government to intervene and compel transparency into these platform operations and privacy for the end consumer,” he said.

Facebook attributed the spike in the removed accounts to “automated attacks by bad actors who attempt to create large volumes of accounts at one time.” The company declined to say where these attacks originated, only that they were from different parts of the world.

Starting with this report, Facebook is disclosing how it deals with the sale of “regulated goods” — that is, drugs and firearms. Facebook prohibits the purchase, sale or gifting of firearms, as well as drugs including marijuana, which is legal in some states and countries. The company said it “took action” on 1.5 million cases involving drugs and 1.4 million involving firearms. This generally means removing the material from Facebook but can also involve suspending users or adding warning screens to videos showing objectionable content.

This story has been corrected to remove reference to Facebook not saying how many slipped through.

Frank Bajak in Boston contributed to this report.