Speaking at a news conference, Fairfax again said the allegations are untrue and the sexual encounters he had with the women were consensual.

His lawyer has contacted prosecutors in Boston and Durham, North Carolina, where the women say the assaults took place, and have asked them to investigate the allegations, Fairfax said. He said he would cooperate fully with the investigations.

“I knew that the allegations against me were false from the moment I first heard them,” he said.

Vanessa Tyson and Meredith Watson leveled their accusations against Fairfax in February. Tyson says Fairfax forced her to perform oral sex in 2004. Watson says Fairfax raped her in 2000 when both were students at Duke University.

The Associated Press typically does not identify people who say they were sexually assaulted, but Tyson and Watson stepped forward voluntarily and have expressed a desire to testify in public.

Their allegations have received new attention after televised interviews this week with CBS News in which they tearfully described their experiences.

Fairfax, a Democrat, said the news media attention has been painful to him and his family. 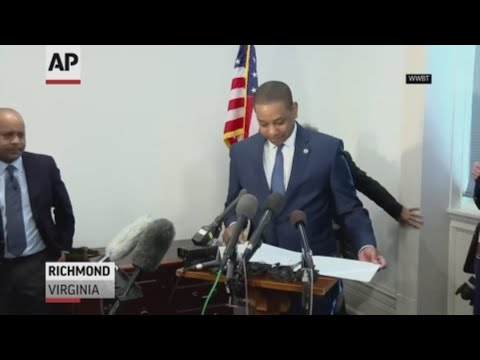 “Sensationalizing allegations does not make them true. Yet airing salacious allegations without evidence does enormous damage,” Fairfax said.

Both women have indicated a desire to testify before state lawmakers, who could impeach Fairfax. Republican lawmakers have said they are willing to hold a hearing and accused Democrats of blocking those efforts to project Fairfax. Democrats rejected any GOP overtures to hold a hearing, and have said allegations should be investigated by law enforcement.

“A politician’s fitness for office is wholly independent of the workings of the criminal justice system,” Banks said.

Republican Majority Leader Del. Todd Gilbert said both women made compelling appearances during their CBS interviews and deserved a forum to share their stories with the General Assembly.

“If anybody who watched that wasn’t moved by it, then I would say their heart isn’t in the right place,” Gilbert said.

A former prosecutor, Gilbert said he does not believe a legislative hearing would impede any criminal investigation.

There’s been no indication of any ongoing law enforcement investigations.

Jake Wark, a spokesman for the Suffolk County District Attorney’s Office in Massachusetts declined to comment on the status of any sexual assaults investigations in general, or the Fairfax matter in particular. Officials in North Carolina did not immediately respond to a request for comment.

Fairfax said he is confident law enforcement personnel will reach the same conclusions as a polygraph test he said he’s releasing Wednesday that showed he is innocent. Fairfax released a polygraph report conducted by a former FBI agent that said Fairfax did not appear to lie when he answered questions about whether he’d assaulted Tyson and Watson.

Gilbert scoffed at the polygraph test, saying it did not clear Fairfax’s name and that numerous criminals have successfully duped such tests in the past.

The accusations against Fairfax were part of a series of scandals in early February that upended Virginia politics.

The women leveled their allegations against Fairfax at a moment when he seemed poised to ascend to the governor’s post. Virginia Gov. Ralph Northam was facing numerous calls to resign after a racist photo showing a person in blackface and another in a Ku Klux Klan costume was found on his medical school yearbook page.

Then, the next in line after Fairfax, Attorney General Mark Herring, acknowledged he appeared in a photo wearing blackface as a student at the University of Virginia, and the prospect of all three statewide officeholders leaving and handing power to Republicans cooled demands for their resignations. Northam, Fairfax and Herring, all Democrats, have remained in office and at the head of their party ahead of November elections in which Democrats hope to gain control of the General Assembly.