BOSTON (AP) — With cheers of “We want seven!” and “Next year, right here!” hundreds of thousands of jubilant fans jammed downtown Boston on Tuesday for a parade celebrating the New England Patriots’ sixth Super Bowl title.

A party atmosphere enveloped the city on the unseasonably mild day. Red, white and blue confetti rained down and music blared as fans packed along sidewalks hoping to catch a glimpse of quarterback Tom Brady, coach Bill Belichick and the rest of the beloved team.

It’s a familiar feeling in Boston. The city’s teams have now won twelve championships since 2001. Just four months ago, the city feted the Red Sox for their World Series victory over another Los Angeles team, the Dodgers.

Boston resident Tom Collins was beaming as he took in the spectacle across from the city’s historic Common, his ticket from this year’s Super Bowl dangling from a lanyard around his neck.

After celebrating in Atlanta, Collins said he and his wife drove nearly non-stop to get home for the parade.

“We had to be a part,” he said as he smoked a cigar and held up a homemade Vince Lombardi trophy. “We had to bring the trophy back to Boston.”

Leigh Hickman, of Swanzey, New Hampshire, drew cheers as he stalked the crowd wearing a rubber goat mask, a Tom Brady shirt and a sign that read: “We’re Still Here.” 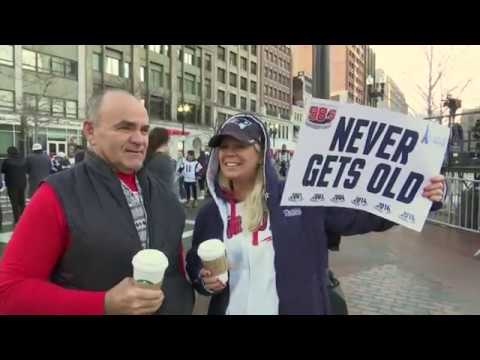 “I wanted to represent the G.O.A.T., the greatest player of all time,” he said. “I’m the same age as him and I can’t imagine doing any of the things he does. It’s unbelievable.”

Fresh from Sunday’s 13-3 victory over the Los Angeles Rams in the Super Bowl title match held in Atlanta, team members and their families took a 2-mile (3-kilometer) swing through the city aboard Boston’s iconic World War II-era amphibious “duck boats.”

Brady held his pigtailed daughter, Vivian, as they waved and grinned at the crowd. Other players, Belichick and team owner Robert Kraft took turns holding aloft the Lombardi Trophy.

Star tight end Rob Gronkowski, who has talked about retiring after this latest NFL title, whooped it up with his brothers and father. He and several other players removed their shirts and spent much of the parade bare-chested.

Players also waved large signs that read, “We Got Everything” — a twist on the team’s motivational hashtag, “Everything We Got,” that had become a theme this season.

Boston Police Sgt. John Boyle said the crowd of roughly 1.5 million was one of the largest the city has seen for a championship parade.

Police made at least a dozen arrests and emergency medical officials transported 34 revelers to area hospitals. Five of those arrested were involved in a brawl that happened near the parade’s end and at least seven of the arrests were juveniles, Boyle said.

Unlike in past years, there was no post-parade rally with speeches from Brady and others. Regardless, Patriots fans made it clear they weren’t ready for the good times to end.

“Go for No. 7,” Lauren Mills said when asked what she’d say to Brady. “He still has how many fingers left? You know, four more rings to go.”