Japan quake toll up to 20 as rescuers dig through landslides

ATSUMA, Japan (AP) — The toll from an earthquake that rocked Japan’s northernmost main island of Hokkaido rose to 20 on Friday, and 19 others remained unaccounted for in one small town after an entire mountainside collapsed on their homes.

The region was slowly restoring transport links and power, with lights back in about half of the homes on the island of 5.4 million people after a day of region-wide blackouts. Officials said they hoped to have the generating capacity close to normal by the weekend, though full repairs to Hokkaido’s main power plant could take up to a week.

Rescuers were using search dogs, backhoes and shovels as they dug through tons of mud and debris from the landslides triggered by the magnitude 6.7 quake that struck before dawn Thursday.

After more than a day of digging there were no reports of survivors being pulled from their crushed homes in the outskirts of the town of Atsuma, not far from the quake’s epicenter.

There were scant signs of damage inside Atsuma itself, a seaside community of about 4,600 that advertises itself as a destination for surfing and a great lifestyle. But by late Friday, the power still had not been restored and stores were closed. 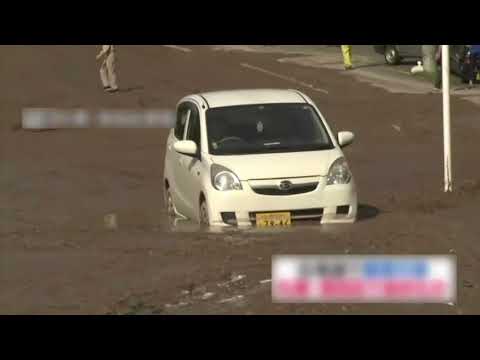 “There are no supplies, so the shop simply cannot function. It’s tough,” said Yasuhiro Kurosaki, a young father whose wife was cradling their infant son outside the small supermarket owned by his father. Shelves inside the darkened shop were bare aside from a few boxes of potato chips.

Most residents sought meals, water and shelter at the local social services office.

Farther inland, unharvested rice fields stretched before a long expanse of hillside that had collapsed all at once, bringing earth and timber down on homes that had been tucked along the edge of the mountain.

Of the 20 people confirmed or presumed dead, 17 were from Atsuma.

In the regional capital, Sapporo, lights and water were restored to many areas a day after the entire island saw power cut off. Bullet train services resumed and the city’s airport at Chitose reopened.

Some parts of the city were severely damaged, with houses atilt and roads crumbled or sunken. A mudslide left several cars half buried, and the ground subsided in some areas, leaving drainpipes and manhole covers protruding by more than a meter (yard) in some places.

“This is shocking. I was always walking on this street and I had never imagined this road could collapse in such a way,” said resident Noriyuki Sumi. “But, if you think positively, imagine if I was walking here when this took place. I might have lost my life. So, I try to think I am lucky in this unfortunate situation.”

Economy, Trade and Industry Minister Hiroshige Seko said it would take at least a week to fully restore power to all communities due to damage at a thermal power plant at Tomato-Atsuma that supplies half of Hokkaido’s electricity.

“"I try to think I am lucky in this unfortunate situation."”

“We’re trying to do it faster, but it will likely take a week,” Seko said. He urged residents to conserve power.

Japan has had a string of natural disasters in recent months. The quake came on the heels of a typhoon that lifted heavy trucks off their wheels and triggered major flooding in western Japan, and damaged the main airport near Osaka and Kobe. The summer also brought devastating floods and landslides from torrential rains in Hiroshima and deadly hot temperatures across the country.