NEW ORLEANS (AP) — Tropical Depression Barry spared New Orleans and Baton Rouge from catastrophic flooding, but even as it weakened and moved north through Arkansas, its trailing rain bands swamped parts of Louisiana with up to 17 inches (43 centimeters) of rain and transformed part of the Mississippi Delta into “an ocean.”

As of Monday evening, with the center of the storm about 105 miles (170 kilometers) northwest of Little Rock, the National Weather Service said flash flood watches remained in effect in southeast Texas through the lower Mississippi Valley.

Forecasters said the storm was expected to produce up to 4 inches (10 centimeters) of rain — and in isolated spots as much as 8 inches (20 centimeters) — across Arkansas, western Tennessee and Kentucky, southeast Missouri, and northwest Mississippi.

No fatalities or serious injuries reported from Barry.

Some of the earliest fears that the storm posed didn’t play out: A shift in its path decreased the possibility of major Mississippi River levees being overtopped at New Orleans, where catastrophic levee breaches along canals devastated the city after Hurricane Katrina in 2005. And the torrents of rain forecasters had said were possible — portending repeats of catastrophic Baton Rouge area flooding in 2016 — didn’t happen. 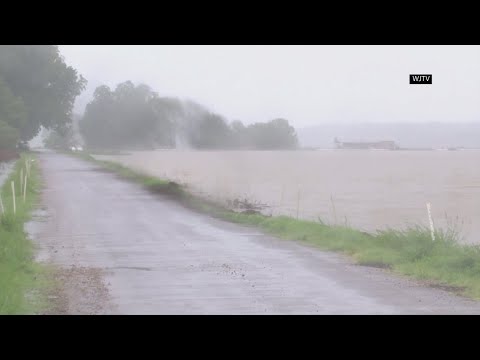 “This was a storm that obviously could have played out very, very differently,” Gov. John Bel Edwards said. “We’re thankful that the worst-case scenario did not happen.”

But the storm was still a huge headache for many. Levees were overtopped along waterways in some coastal parishes. More than 90 people were rescued because of high water in at least 11 parishes, Edwards said.

Calcasieu Parish emergency director Dick Gremillion estimated northern parts of the parish got 17 inches (43 centimeters) in a few hours. Two people had to be rescued from swamped cars and 19 others were moved from residences threatened by high water, he said.

In Evangeline Parish, north of Lafayette, KLFY television showed scenes of water-covered streets and flooded cars in the town of Ville Platte.

For much of Monday a continuous line of showers extended from the southwest to the northeast.

In Mississippi, forecasters said 8 inches (20 centimeters) of rain had fallen in parts of Jasper and Jones counties by Monday, with several more inches possible.

“The South Delta has become an ocean,” Mississippi Gov. Phil Bryant wrote on Twitter on Monday.

He’s calling on the federal government to build pumps to drain water from the confluence of the Yazoo and Mississippi Rivers. The EPA shelved the project in 2008 amid concerns about wetlands and wildlife. The Trump administration has said it might reconsider that decision.

The Edison Electric Institute, a trade association, estimated that there were more than 325,000 power outages reported in multiple states over the course of the storm, and that about 33,000 remained without power as of Monday evening.

For the latest on Tropical Storm Barry, visit https://apnews.com/Hurricanes .