DUNCAN, Okla. (AP) — The Latest on a shooting at a Walmart in Duncan, Oklahoma (all times local):

Authorities in Oklahoma are emphasizing that the investigation into a fatal shooting outside a Walmart is preliminary, but that it was an “isolated incident.”

Stephens County District Attorney Jason Hicks said during a press conference that there was never an active shooter Monday inside the Walmart in Duncan. The shooting that left three dead, including the shooter, happened in the store parking lot.

Police Chief Danny Ford says the shooter shot a man and woman then turned then gun on himself. All three died at the scene.

Authorities are still working to notify the victim’s relatives before publicly identifying them.

Hicks says the two victims had been inside the Walmart Money Center, which offers check-cashing, money orders, tax preparation and other services, before they were killed. But Hicks said the shooter did not go inside the business.

The lead prosecutor for the area where three people died in a shooting outside an Oklahoma Walmart store says the shooter is among the dead.

Stephens County District Attorney Jason Hicks confirms that the shooter, who has not been publicly identified, died in the shooting Monday morning in Duncan, Oklahoma. Authorities say two men and one woman were fatally shot. 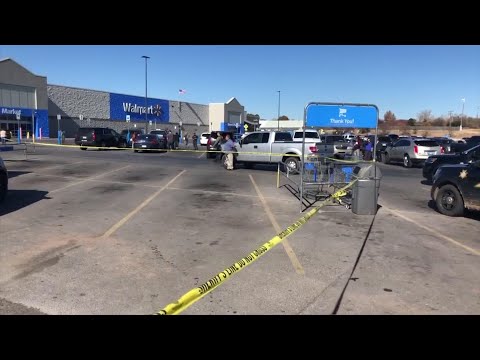 Police are interviewing witnesses and collecting evidence. Two bodies covered with sheets are visible Monday afternoon. Police say a handgun was found at the scene.

Walmart spokeswoman LeMia Jenkins says the shooting was “not an active shooter situation” and that the store was not evacuated.

Police are interviewing witnesses and collecting evidence outside an Oklahoma Walmart where two men and a woman were fatally shot.

Two bodies covered with sheets are visible Monday afternoon outside the store in Duncan, Oklahoma.

One body is in the driver’s seat of a red, two-door car. The other body is lying on the ground next to the vehicle. Bullet holes are visible in the car’s windshield.

A man says he was parking outside the Walmart when he heard about nine gunshots. Aaron Helton of Duncan says he then saw three bodies.

Police have said a handgun was found at the scene.

Walmart spokeswoman LeMia Jenkins says the shooting was “not an active shooter situation” and that the store was not evacuated.

Walmart says none of its employees was involved in a deadly shooting outside one of its stores in southwestern Oklahoma.

Walmart spokesman LeMia Jenkins says the shooting Monday morning in the parking lot outside the store in Duncan was “an isolated incident and was not an active shooter situation.”

Jenkins says the retail giant did not evacuate the store and that no employees were involved in the shooting.

Police have confirmed that two men and a woman have been fatally shot at a Walmart in Oklahoma.

Duncan Police Chief Danny Ford says two of the people killed were in a vehicle outside the store and the third person killed was in the parking lot of the store in Duncan.

Ford says police are looking for witnesses to the shooting.

Duncan is about 80 miles (130 kilometers) south of Oklahoma City.

Local media are reporting that three people have been fatally shot at a Walmart in Oklahoma.

Local media are reporting that several people have been injured in a shooting at a Walmart store in Oklahoma.

Fox 25 TV reports that police say three people were shot and wounded Monday morning at the store in Duncan, Oklahoma.

A dispatcher tells The Associated Press that “everyone is at the scene.”