When science teacher Diana Allen set out to teach climate change, a subject she’d never learned in school, she fell into a rabbit’s hole of misinformation: Many resources presented online as educational material were actually junk.

“It is a pretty scary topic to take on,” said Allen, a teacher at Sanford Junior High School, in southern Maine. “There are some pretty tricky websites out there. You kind of have to be an expert to be able to see through that like, ‘Oh, no, these guys aren’t telling you the truth.’”

There are materials produced by climate change doubters, lesson plans developed by the oil industry, and countless other sites with misleading or outdated information. The Climate Literacy and Energy Awareness Network , funded by federal grants, reviewed more than 30,000 free online resources and found only 700 acceptable for use in schools.

“There’s a lot of information that’s out there that is broken, old, misleading, not scientifically sound, not sound technically,” said Frank Niepold, a climate education coordinator at the National Oceanic and Atmospheric Administration.

The Heartland Institute, an Illinois-based group that dismisses climate change, in 2017 sent thousands of science teachers copies of a book titled “Why Scientists Disagree About Global Warming” The book, attributed to the group’s Nongovernmental International Panel on Climate Change, misrepresents the near-universal consensus of scientists and the United Nations’ Intergovernmental Panel on Climate Change that global warming is real and man-made. 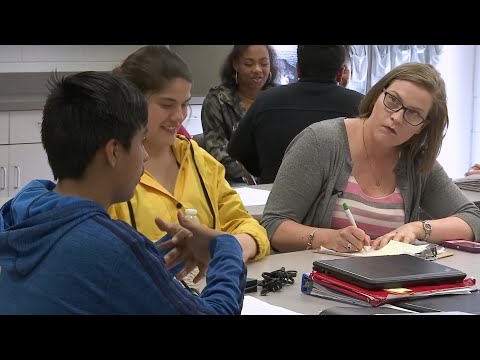 Another resource, a set of six lesson plans on understanding climate change, is available online from the Canada-based Fraser Institute, which counts the Charles Koch Foundation among its financial supporters. The lessons claim that mainstream climate scientists have made selective use of data and that it’s a matter of debate whether human-generated carbon dioxide emissions have contributed to climate change, saying “the issues are far from settled.”

“Our history is full of examples where ‘common knowledge’ was discarded in favor of more correct hypotheses,” the lesson plans say. Among them, it lists, “Are diseases caused by evil spirits? Are natural disasters caused by angry gods?”

And: “Does smoking pose a threat to your health?”

Also vying for educators’ attention are classroom-ready materials made available by the oil companies. ExxonMobil, Chevron, Shell and other companies have invested heavily in promoting science, technology, engineering and math education in K-12 schools. Such materials are used widely to teach topics related to energy, but critics say they can mislead by not addressing the role of burning fossil fuels in global warming.

For teachers in cash-strapped schools, it can be hard to pass up the free handout materials.

Melissa Lau, a sixth-grade teacher in Piedmont, Oklahoma, attended one of the training sessions put on regularly for teachers by the Oklahoma Energy Resource Bureau, which is funded by the oil and gas companies. She kept the $50 stipend and the tub full of science equipment she got from the group but she tossed its illustrated lesson plans featuring the character “Petro Pete.”

In a book available online, Petro Pete has a nightmare about everything that would be missing from his life if there were no petroleum products, from his toothbrush to his school bus.

“I get free beakers and cool things like that,” Lau said. “But the curriculum itself is borderline propaganda.”

A spokeswoman for the industry group, Dara McBee, said their materials align with Oklahoma standards, which do not reference climate change, and they are intended to supplement what students learn in school.

Kevin Leineweber, a science teacher at Cascade High School in Clayton, Indiana, said he is skeptical about resources sent to him, including oil industry materials, but some colleagues are less so. At a districtwide science meeting a couple months ago one elementary school teacher expressed excitement about receiving unsolicited materials on climate change in the mail, to help introduce the topic to students. After talking it over with Leineweber, the teacher tossed the mailing of unknown origin.

The oil industry materials have the effect of pushing climate change to the periphery, Charles Anderson, a professor of science education at Michigan State University.

“The school systems of the country are so fragmented and under-resourced that they have no choice but to turn to people like the oil industry who offer them free stuff,” he said.

Climate change education varies across states, and often from one classroom to the next. The Next Generation Science Standards, which emphasize climate change and how humans are altering the planet, have been adopted by or served as a model for most states. But many teachers report that they shy away from the topic not only because of issues with materials but also the political sensitivities, and uncertainty over where to introduce an issue that crosses so many disciplines.

Diana Allen, 48, said she began to see it as her duty to teach climate change even though it’s not required under Maine’s science education standards.

For her lesson plans on climate change, she turns primarily to other teachers, pulling resources they have vetted and shared on an email thread overseen by the National Science Teachers Association . Other teachers have turned to the National Center for Science Education, which posts free climate change lessons and has a ”scientist in the classroom ” program.

Many educators say that climate change as an area of instruction is still so new that textbook publishers have not caught up enough to provide useful materials.

“I have a Ph.D. from Stanford in biochemistry, and it’s still hard for me to source stuff that works in my classroom right,” said Kirstin Milks, an Earth science teacher at Bloomington High School South in Indiana.

Milks helps train educators on how to teach climate change. In their applications, many teachers display a sense of urgency, she said.

Sometimes educators have to push back against what their students are taught in other classrooms.

Leigh Foy, a science teacher at York Suburban High School in Pennsylvania, said a social studies teacher at her school has told students for years that climate change is a hoax and he could prove it with an experiment. He would fill a cup in the classroom with ice and water, mark the water level, and show students it didn’t rise as the ice melted. The problem, Foy said, is his lack of accounting for the difference between sea ice and land ice or the expansion of water as it gets warmer.

“This is just an example of what we’re up against,” Foy said.

Teachers who have gotten themselves up to speed on climate change often say they make it a primary goal to help their students identify untrustworthy materials.

Sarah Ott, who teaches physical science to eighth-graders in Dalton, Georgia, dedicates a section of her class to climate literacy. In one April class, she discussed how to identify misinformation, highlighting materials including a petition signed by more than 30,000 purported scientists that dismisses the dangers of global warming.