AUBURN, Ala. (AP) — An Alabama district attorney said Monday that authorities have “good reason” to believe human remains found in a wooded area belong to the missing stepdaughter of a UFC heavyweight fighter.

“I can confirm that human remains have been found in Macon County on County Road 2 and we have good reason to believe they are that of Aniah Blanchard,” Hughes said.

Police arrested a third person Monday in connection with the disappearance of Blanchard, 19. She was last seen Oct. 23 in Auburn. Her stepfather is UFC fighter Walt Harris.

After she disappeared, Blanchard’s black Honda CRV was found abandoned more than 50 miles (90 kilometers) away at an apartment complex in Montgomery, Alabama. Auburn police detective Josh Mixon testified at a hearing last week that Blanchard’s blood was found in the car and it appeared she had suffered a life-threatening injury.

Mixon testified that convenience store video footage showed a man buying a beverage look over at Blanchard. He said tipsters later identified the man as Ibraheem Yazeed, 29, and a man at the store told investigators he saw Yazeed force Blanchard into her car and drive away. 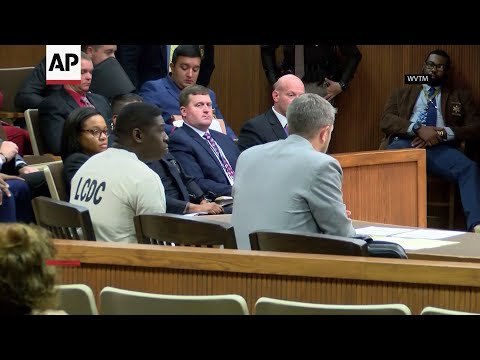 Police have arrested Yazeed and a second man, 35-year-old Antwain Shamar Fisher of Montgomery, on kidnapping charges in Blanchard’s disappearance. In an arrest warrant filed with the court Monday, police said Fisher helped Yazeed by disposing of evidence and driving him. Hughes said a third man, David Johnson, Jr., was arrested Monday in Montgomery and charged with hindering prosecution in the case.

The discovery of human remains comes after a month-long search for the missing teen whose face appears on billboards across the county.

Auburn Police said Monday that investigators “obtained information regarding the possible location of a body.” Law enforcement officials searched a wooded area in Shorter, Alabama, and found what appeared to be human remains several feet into the woods.

“A complete investigation is under way by (the Alabama Law Enforcement Agency) and Auburn Police to determine the identity and how the victim came to be at that location. The examination will explore if the remains are those of Aniah Blanchard,” Auburn police said in a statement.