The river held steady at record levels, offering little relief to areas enduring historic flooding. Hundreds of homes have been flooded so far in and around Fort Smith, Arkansas’ second-largest city, while nearly 1,100 homes have flooded across the Oklahoma border in Muskogee County, according to local emergency management officials.

“This has been massive for me. Totally devastating,” said Kenny Ward, a 53-year-old former Marine who sheltered with dozens of other flooded-out residents at the Evangel Temple Assembly of God Church in Fort Smith.

Ward said he had been living in a tent along an Arkansas River tributary before floodwaters forced him out a week ago. His tent, housing his clothing, medication, sleeping bag and birth certificate, was surrounded by waist-high water when he returned to the site three days ago.

Ward said he spent the next five days helping to fill sandbags for his neighbors who were trying to protect their homes. 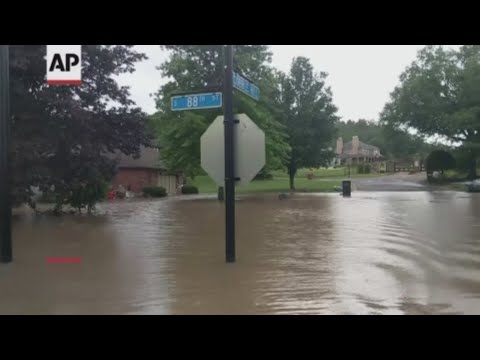 Thomas Lindley said floodwaters reached the roof of his home three days ago in nearby Moffett, Oklahoma. Lindley said he doesn’t have flood insurance and didn’t know how he would recover.

“I’m just trying to get some relief aid or another job,” he said. “That’s all we can do.”

In nearby Van Buren, Arkansas, officials warned that a levee protecting a mostly rural area on the western edge of the state was “showing signs of significant leakage and deterioration.”

Crawford County Sheriff Ron Brown said an 80-foot-wide section of the levee slid down Tuesday morning, but workers were able to reinforce it to prevent the levee from being breached. Brown said the levee was still at risk of failing. If that happens, about 250 people and 150 structures would be at risk.

All other levees in Arkansas appeared to be in good shape as the river level remained at a historic crest Thursday, according to Col. Bob Dixon of the U.S. Army Corps of Engineers.

But he said local officials should have a plan in place in case a levee fails, because the flooding was expected to persist for days — if not weeks.

“My concern is, they are designed for a temporary load and they are holding a lot more water than they have been tested on before,” Dixon said.

Meanwhile, portions of the raging river showed signs of receding upstream in northeastern Oklahoma as the Corps scaled back releases from a hydroelectric dam near Tulsa, about 104 miles (167 kilometers) northeast of Fort Smith.

Powerful storms that dropped more than 20 inches (51 centimeters) of rain on parts of the region over the past month have overwhelmed the Keystone Lake reservoir, which drains a watershed of about 22,000 square miles (57,000 square kilometers) in Oklahoma and Kansas.

“We’ve been stepping down the release overnight. It’s a gradual process,” Weece said, noting that the Corps plans to reduce flow to 100,000 cubic feet (2831 cubic meters) per second by Tuesday.

The river’s level in Tulsa crested Wednesday afternoon and had fallen by almost 2 feet (0.61 meters) by Thursday, according to the National Weather Service.

Arkansas Gov. Asa Hutchinson said Thursday that more than 500 homes and thousands of acres of farmland have been affected by the flooding.

“When you see it from the air, the breadth of the flooding, you realize the historic area we’re in in terms of the Arkansas River,” the governor said at a news conference after viewing the flooding by helicopter with members of the state’s congressional delegation.

At least one death in Arkansas has been blamed on the flooding. In Illinois, Gov. J.B. Pritzker activated the National Guard to respond to recent severe flooding there.