NEW YORK (AP) — A video of Harvey Weinstein aired on television Wednesday showing him boldly propositioning a woman who later accused him of rape and repeatedly touching her and stroking her arm and back during what was supposed to have been a business meeting.

Melissa Thompson, who sued Weinstein in June, said she made the recording, shown by Sky News, while demonstrating video technology for the movie mogul-turned-#MeToo villain at his New York City office in 2011.

Weinstein is seen on the video rejecting a handshake from Thompson and then hugging her instead and rubbing her back.

He then caresses her shoulder as they sit side-by-side in front of her laptop computer.

At one point he tells her: “Let me have a little part of you. Can you give it to me?”

After quickly agreeing to use the technology to promote his movies, Thompson said Weinstein put his hand up her dress.

The video, which only captures the two from the waist up, doesn’t show Weinstein’s hands at that point, but does show Thompson reacting with discomfort and telling Weinstein, “That’s too high. That’s too high.”

It also shows her joking about his advances, saying that “data is hot.”

Sky News aired only portions of the video. Thompson’s lawyers declined to share it with The Associated Press. 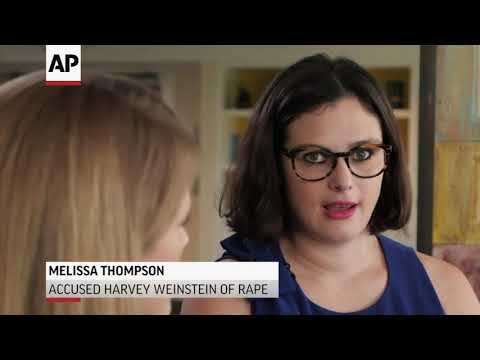 A woman who accused Harvey Weinstein of rape has released a video on Sept. 12, 2018, showing the disgraced film producer propositioning her in the hours before the alleged incident. (AP video)

Weinstein’s lawyer said the full video “demonstrates that there is nothing forceful” and shows “casual, if not awkward, flirting from both parties.”

“Anything short of that is intended to make Mr. Weinstein appear inappropriate and even exploitative,” lawyer Ben Brafman said. “It was produced by Ms. Thompson to bolster her position in a civil lawsuit seeking money. This is a further attempt to publicly disgrace Mr. Weinstein for financial gain and we will not stand for it. Facts do matter.”

In an interview with Sky News, Thompson said Weinstein’s behavior was distracting and she struggled to stay “on script” with the product pitch. She said his affect changed from the start of the meeting, that his eyes had darkened and he “looked like a predator.”

Thompson said she later met Weinstein at a nearby hotel bar, where she said she expected to close the technology deal. She said Weinstein led her to a hotel room and raped her.

Along the way, she said, he rebuffed her attempts to fight or get away.

“If I would try to fight myself away from him, he would then move around to where he could block me in somewhere, and he’s a big individual,” Thompson told Sky News. “I constantly felt trapped, no matter where I turned.”

Weinstein has been charged in New York with sexually assaulting three women. Thompson is not among them.

Thompson, who had previously worked on Wall Street, rejected suggestions that she encouraged Weinstein’s behavior.

She told Sky News she wanted to keep the conversation professional and politely pushed back at his advances while also trying to preserve the deal.

“I never met anyone that I couldn’t handle until Harvey Weinstein,” she said. “We don’t have to live with being raped when we think we’re going to a business meeting.”

Meantime, prosecutors in the criminal case filed papers Wednesday challenging defense claims that they withheld evidence from a grand jury that could have helped Weinstein deny the allegations, including emails proving he had a consensual relationship with one of the alleged victims. In one she wrote, “I love you, always do. But I hate feeling like a booty call,” according to a defense motion to dismiss the case.

Prosecutors argued they had no obligation to turn over the emails because Weinstein could have testified about the relationship himself, but decided against it. They added that secret grand jury minutes provided to the judge showed they presented evidence “fairly and in a manner that was not misleading.”

Separately on Wednesday, a federal judge in Manhattan heard arguments over whether a civil lawsuit brought by six women against both Weinstein and men on the board of his film company should go forward.

U.S. District Judge Alvin K. Hellerstein expressed skepticism about the strength of allegations the men conspired to cover-up Weinstein’s misdeeds by intimidating the women, and gave their lawyer until Oct. 31 to revise the complaint. He said the most viable claim was that Weinstein abused his power to make or break acting careers to get sex.

Weinstein “was not attractive in such a way that Paul Newman was,” he said.