The Latest: Evers to appeal to Walker to veto GOP power play

MADISON, Wis. (AP) — The Latest on Wisconsin Republican lawmakers moving to limit the powers of the incoming Democratic governor and attorney general (all times local):

The incoming Democratic governor of Wisconsin says he will make a personal appeal to outgoing Republican Gov. Scott Walker to veto legislation that weakens the new administration’s powers.

Gov.-elect Tony Evers said Wednesday that he also wants Wisconsin residents to urge Walker not to sign the bills. If the bills are signed, Evers says, he will explore litigation or other ideas to ensure the legislation “does not get into practice.”

The Republican-controlled Legislature approved sweeping changes early Wednesday that weaken the governor’s ability to make rules that enact laws. The legislation also shields the state jobs agency from his control until September and cuts into the powers of the incoming Democratic attorney general.

Evers says the state “should be embarrassed” by the Republicans’ actions and that they have ignored the will of voters. 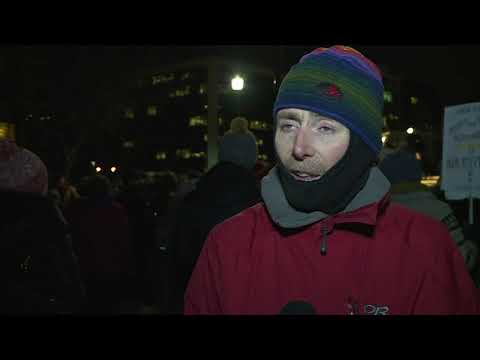 Gov.-elect Tony Evers said Wednesday that Republicans have overridden the will of voters who chose Democrats in last month’s election. He says a handful of people desperately want to “cling to power.”

The Republican-controlled Legislature approved sweeping changes early Wednesday that weaken the governor’s ability to make rules that enact laws. The legislation also shields the state jobs agency from his control until September and cuts into the powers of the incoming Democratic attorney general.

The Republican-controlled Wisconsin Legislature has approved a sweeping package of bills weakening the incoming Democratic governor and attorney general.

The state Assembly approved the lame-duck legislation Wednesday morning. The Wisconsin Senate did the same less than three hours earlier after lawmakers worked through most of the night.

The bills now go to outgoing Republican Gov. Scott Walker, who has signaled his support.

The measures would limit the governor’s ability to promulgate administrative rules, which enact laws and give lawmakers the power to control appointees to the state economic development agency’s board.

The measures would also require the attorney general to get legislative approval to withdraw from lawsuits. That move is designed to block Democratic Gov.-elect Tony Evers from allowing the incoming attorney general, Democrat Josh Kaul, to withdraw Wisconsin from a multistate lawsuit challenging the Affordable Care Act.

The measures also restrict early in-person voting to two weeks before an election.

The Wisconsin Senate has narrowly rejected a bill that would have created a state guarantee that people with pre-existing conditions can have access to health insurance.

Democrats say the measure provided inadequate coverage and would cause premiums to skyrocket.

The bill failed by one vote Wednesday during a lame-duck legislative session where Republicans are focused on measures designed to limit the powers of the incoming Democratic governor and attorney general. That measure is awaiting a final legislative vote in the state Assembly.

The pre-existing conditions measure failed after all 15 Democrats in the Senate and two Republicans voted against it. The measure had long been stalled in the Senate due to lack of GOP support.

Republican Gov. Scott Walker supported the measure, which became an issue in his failed re-election campaign. Walker lost to Democrat Tony Evers, a staunch supporter of the pre-existing coverage guarantee in the federal Affordable Care Act.

The Republican-controlled Wisconsin Senate has passed a sweeping measure taking power away from the incoming Democratic governor and attorney general, and reducing how long early voting can take place.

The measure was approved on a 17-16 vote with all Democrats and one Republican voting against it. The Assembly was expected to give final approval later Wednesday morning and send the measure to Republican Gov. Scott Walker, who has signaled his support.

The bill would limit the governor’s ability to put in place administrative rules that enact laws and give the Legislature the power to control appointees to the board that runs the state economic development agency until Sept. 1.

The legislation would also require legislative approval to withdraw from lawsuits, taking that away from the attorney general.

One provision allowing lawmakers to replace the attorney general with their own attorneys was stricken following all-night negotiations among Republicans.

The Wisconsin Legislature is preparing to vote on limiting the powers of the incoming Democratic governor and attorney general.

Lawmakers were expected to vote early Wednesday morning on the proposal, after spending most of the night hammering out deals in private. The action comes just weeks before Republican Gov. Scott Walker is replaced by Democrat Tony Evers.

The proposal up for a vote would weaken the governor’s power to put in place administrative rules enacting state laws. It would also allow the Legislature to sidestep the attorney general and hire private attorneys. The Legislature, not the governor, would have the majority of appointments on the state’s economic development agency that Evers has said he wants to dismantle.

The power to withdraw Wisconsin from a lawsuit challenging the federal health care law would rest with a legislative committee, rather than the attorney general.

The proposal would also restrict early voting to no more than two weeks before an election.

Republicans who control the Wisconsin Assembly have passed a lame-duck bill enacting a Medicaid work requirement.

The measure would prevent incoming Democratic Gov.-elect Tony Evers from withdrawing a federal waiver request to implement the work requirement for able-bodied adults younger than 50. The bill also would require new legislative oversight of waiver requests related to health care made by the governor.

The Assembly passed the bill 59-32 early Wednesday morning. The Senate passed the proposal earlier in the evening. It now goes to Gov. Scott Walker for his signature.

The bill is part of a package of Republican lame-duck legislation designed to weaken Evers and incoming Democratic Attorney General-elect Josh Kaul. Debate on the rest of the proposals was expected to stretch into early Wednesday in both houses.

Wisconsin Republicans are working through the night to bring together enough votes to pass a sweeping package of lame-duck proposals designed to empower the GOP-controlled Legislature and weaken the incoming Democrat replacing Republican Gov. Scott Walker.

Both Evers and Kaul urged Republicans not to do it and warned of lawsuits that would bring more gridlock to Wisconsin when the new administration, and the first divided government in 10 years, takes over.

The measures would also limit early voting to no more than two weeks before an election, a move Democrats say is illegal.