GILROY, Calif. (AP) — The Latest on a shooting at a food festival in Northern California (all times local):

Hundreds of Gilroy residents have come to City Hall to light candles, comfort each other and show strength after Sunday night’s shooting that killed three people, including two children, ages 6 and 13.

A city councilor led residents Monday night in a chant of “We are Gilroy strong!”

The crowd cheered when Mayor Roland Velasco said the community “cannot let the bastard that did this tear us down.”

The 19-year-old gunman invaded the Gilroy Garlic Festival, which draws thousands of people from the San Francisco Bay Area and beyond. He was slain by police.

A family member of a 13-year-old girl who was killed by a gunman at the Gilroy Garlic Festival in California says the teenager may have inadvertently saved another relative’s life.

Keyla Salazar of San Jose was one of three people slain Sunday before police killed the attacker.

Keyla’s aunt says the teen was eating ice cream with family members when they heard gunshots and began to flee. Katiuska Vargas says her niece stayed back to keep pace with a relative who uses a cane and was shot with a bullet that otherwise might have hit that woman. 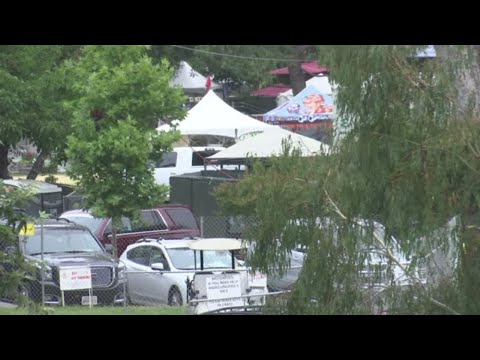 Vargas says Keyla’s stepfather was wounded as he went back for her.

Vargas says she and Keyla’s mother at first didn’t know where Keyla was taken for treatment, so they drove to every local hospital several times.

The girl later died at a Gilroy hospital.

Keyla’s two sisters, ages 4 and 12, also were at the festival, but they escaped unharmed.

Authorities say the people shot and wounded by a gunman at a California food festival ranged in age from 12 to 69 years old.

Santa Clara County officials say 13 people were taken to hospitals with gunshot wounds after Sunday’s attack at the Garlic Festival in Gilroy.

One died at a hospital. Another person remains in critical condition and one is in serious condition.

Several others have been released or transferred to other medical centers.

A total of three people were fatally wounded before police killed the 19-year-old gunman. They included a 6-year-old boy and a 13-year-old girl.

Gilroy Police Chief Scot Smithee says it’s too early in the investigation to determine if any of the victims were targeted, or if he the shooter fired indiscriminately Sunday at a food festival in the city.

“The descriptions that have been given to me, it appeared as though it (the shooting) was random. But I think we’re too early in the investigation to say that definitively,” Smithee said. He says investigators are still compiling a list of everyone wounded.

Authorities say they have served two search warrants associated with the shooting that killed three people.

Smithee says police also searched a residence associated with Legan. He didn’t say what, if anything, the searches turned up.

Craig Fair, deputy special agent in charge at the FBI’s San Francisco office, said investigators were combing through the suspect’s social media profiles as they worked to try to determine a motive for the shooting.

Authorities say they have served two search warrants associated with a shooting that killed three people at a Northern California food festival.

Smithee says police also searched a residence associated with Legan. He didn’t say what, if anything, the searches turned up.

Craig Fair, deputy special agent in charge at the FBI’s San Francisco office, said investigators were combing through the suspect’s social media profiles as they worked to try to determine a motive for the shooting.

Vendors at California’s Gilroy Garlic Festival say a 10-year-old girl saved their bosses’ 3-year-old son from harm after a gunman shot at their tent, wounding the toddler’s parents.

Candice Marquez told The Associated Press on Monday that she was working the Honey Ladies stand with Cheryl Low when they stepped away to go to nearby portable restrooms.

When they left the restrooms, they heard what they said sounded like fireworks. They looked to their left and saw a shooter putting another clip into a gun and heading toward the Honey Ladies tent.

Marquez says she and Low ran in the other direction while the gunman continued.

While this was happening, Marquez says, her 10-year-old niece was still in the tent and helped their bosses’ 3-year-old son to safety under a table.

“She was brave. She grabbed him and put him under a table,” Marquez said of the girl.

Marquez says her niece told her she looked the gunman right in the eye, but that he didn’t shoot.

Authorities in northern Nevada say they searched an apartment believed to have been used by the 19-year-old man responsible for the California garlic festival shooting that killed two children and a recent college graduate.

Mineral County Sheriff Randy Adams called the investigation ongoing and declined in a statement to provide information about what was sought or found.

A spokeswoman for the FBI in Nevada declined to comment.

Another apartment in the triplex appeared to be vacant, and no one answered the door at the third.

A northern Nevada gun shop says the gunman in the California festival shooting purchased his rifle through the store’s online shop and appeared happy and presented “no reasons for concern” when he appeared in person.

Big Mike’s Guns and Ammo in Fallon posted on the shop’s Facebook page that “we are heartbroken this could ever happen,” and the business “would never sell any firearm to anyone who acted wrong or looks associated with any bad group like white power.”

The post’s author, who signed off as “Mike,” said he did not know the gunman, but “when I did see him, he was acting happy and show no reasons for concern.”

A law enforcement official said investigators believe the gunman used a WASR-10, which was purchased from Big Mikes Gun and Ammo in Nevada earlier this month. The official was not authorized to discuss an ongoing investigation and spoke to The Associated Press on condition of anonymity

One of the three people killed in a shooting at California’s Gilroy Garlic Festival has been identified as a recent graduate of a college in upstate New York.

Keuka College President Amy Storey says in statement Monday that Trevor Irby, a biology major who graduated in 2017, was among the victims of the Sunday shooting.

The others killed were a 6-year-old boy, Stephen Romero, and a 13-year-old girl whose name has not been released.

The gunman in the California festival shooting appears to have posted two photos on Instagram that day, including one minutes before he opened fire.

Legan’s since-deleted Instagram account says he is Italian and Iranian. It also shows a photo he posted earlier depicting Smokey the Bear in front of a “fire danger” sign. In the caption, Legan said to read “Might is Right,” a book published in the 1800s.

The misogynist and anti-Semitic work is used by neo-Nazis and white supremacists on extremist sites.

Minutes before the shooting, he posted a photo from the festival: “Ayyy garlic festival time” and “come get wasted on overpriced (stuff).”

The mayor of the California city where a gunman killed three at an annual food festival says the community will mourn the tragedy but will get through it.

Gilroy Mayor Roland Velasco told a press conference Monday that gun violence is an epidemic in the United States and it’s “beyond sad” that a charitable event such as the Gilroy Garlic Festival was targeted.

The gunman opened fire Sunday as the festival was in its closing hours, sending the crowd scattering.

Three police officers immediately engaged and killed the gunman, who was armed with an assault-type rifle.

The mayor commended the officers’ “remarkable bravery” in running toward the shooter and says they undoubtedly saved many lives by putting their own lives in danger.

Gilroy Police Chief Scot Smithee says even though the handgun-equipped officers were outgunned, the officers were able quickly fatally shoot the gunman.

The shooting occurred on the closing day of the annual Gilroy Garlic Festival.

The gunman killed a 6-year-old boy, a 13-year-old girl and a man in his 20s. There’s no immediate word on the other 15 people who were either wounded or suffered injuries such as scrapes and bruises.

Smithee says the motive remains unknown. Police are still investigating whether there is a second suspect.

A woman who lives across the street from the family of a man who opened fire at California food festival says SWAT officers came to the home.

Jan Dickson says the officers ordered those inside to come out with their hands up Sunday night and one person did. She says the parents had four boys: one who’s a boxer and another who’s a runner.

Dickson said Monday that they were “a nice, normal family.” She says Santino William Legan hadn’t lived there for at least a year.

A law enforcement official who wasn’t authorized to discuss the matter publicly and spoke to The Associated Press on condition of anonymity said Legan opened fire at the Gilroy Garlic Festival on Sunday.

The shooting killed three people, including a 6-year-old boy, and injured about 15 before police killed the gunman.

President Donald Trump is condemning the “wicked murderer” who opened fire at a California garlic festival, killing three and wounding at least 15 others.

Trump spoke Monday before an event at the White House to sign a bill ensuring that a victims’ compensation fund related to the Sept. 11 attacks never runs out of money.

The president said that the nation would “grieve” for the victims’ families and “ask that God comfort them.”

Trump, who has steadfastly opposed ambitious gun control measures, said the nation would “answer violence with the courage of our national resolve.”

Police said the gunman appeared to randomly target people when he opened fire just after 5:30 p.m. Sunday at the large festival in Gilroy.

Among those killed was a 6-year-old boy.

A law enforcement official says the gunman in the California festival shooting has been identified as Santino William Legan.

The official wasn’t authorized to discuss the matter publicly and spoke to The Associated Press on condition of anonymity Monday morning.

The shooter was killed after opening fire on the Gilroy Garlic Festival on Sunday. Three victims were killed and at least 15 others injured.

Authorities say he used a rifle and gained entry to the packed festival by cutting through a fence to avoid security measures, including metal detectors.

A 6-year-old boy was one of the three people killed when a gunman opened fire at a Northern California garlic festival.

“My son had his whole life to live and he was only 6,” his father Alberto Romero told NBC Bay Area. “That’s all I can say.”

Authorities say three people were killed and at least 15 others injured in the shooting at the Gilroy Garlic Festival.

The shooter also was killed. Authorities say he used a rifle and gained entry to the packed festival by cutting through a fence to avoid security measures, including metal detectors.

Edward and Jane Jacobucci said they were standing at their booth selling garlic graters when the shooting started Sunday afternoon at the Gilroy Garlic Festival.

Edward Jacobucci said the shooting was “absolute chaos.” ″It happened right in front of our booth,” he said.

Jane Jacobucci described the shooter as a tall, thin young man in camouflage with a big gun.

She said her husband threw her to the ground when the shooting started.

Three people were killed and at least 15 others injured in the shooting. Also dead is the shooter, who used a rifle and gained entry to the packed festival by cutting through a fence to avoid the tight security, including metal detectors, police said.