WASHINGTON (AP) — President Donald Trump on Wednesday called Venezuelan President Nicolas Maduro’s refusal to accept humanitarian aid a “terrible mistake” and the decision an example of what can happen when the wrong government holds power.

Trump seemed also to hint at future action by the U.S. and its allies against Maduro, who has blocked shipments of food and other assistance sent by the U.S. and other countries for the people of Venezuela. Political and economic turmoil has led to vast shortages of basic goods, forcing many Venezuelans to flee to neighboring Colombia or participate in massive street protests in an attempt to pressure Maduro to leave office.

The U.S. and other nations favor that outcome and have recognized opposition leader Juan Guaido as Venezuela’s rightful leader.

Asked if he had a backup plan should Maduro retain power, Trump said: “I always have Plan B. And C and D and E and F. ... A lot of things are happening in Venezuela that people don’t know about.”

“We’ll be seeing a lot over the next few weeks,” he said. 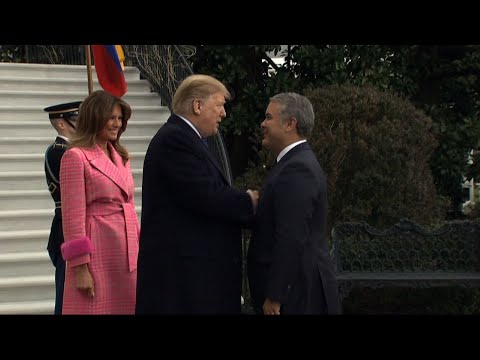 Maduro has blasted the humanitarian aid as part of a U.S.-led coup to topple him. Trump said Maduro made the wrong call in denying his people the assistance, noting that Maduro has blocked the bridge closest to where the aid is being warehoused on the Colombian border, but not other crossings.

“I think he’s making a terrible mistake by not allowing” the aid to be distributed, Trump said. “It’s showing bad things and, really, we’re trying to get food to people that are starving. You have people starving in Venezuela, and it just shows what can happen with the wrong government.”

Guaido said this week that he will try to run caravans of the badly needed food and medicine into Venezuela, starting Feb. 23.

Duque publicly committed Wednesday to making sure the supplies get into Venezuela.

“Obstructing the access of humanitarian aid is a crime against humanity,” the Colombian leader said.

Russia, which backs Maduro, has said Venezuela should be allowed to solve its issues internally and peacefully, a sentiment that Russian Foreign Minister Sergey Lavrov reiterated to U.S. Secretary of State Mike Pompeo during a telephone conversation Wednesday, according to Lavrov’s office.

Trump repeatedly has said he has not ruled out any option, including military action, for dealing with the turmoil in Venezuela.

Asked Wednesday whether he would send in U.S. troops, Trump replied, “We’ll see.” But Elliot Abrams, the president’s special representative for Venezuela, was more direct during an appearance Wednesday on Capitol Hill, telling House lawmakers military action “is not the path that the U.S. is pursuing.”

Several members of the House Foreign Affairs Committee said they would oppose U.S. military intervention. Abrams said he believed increasing international pressure and the pain of sanctions against Venezuela will eventually lead to Maduro’s ouster.

On another top concern, Trump chastised Duque over illegal drugs during the public portion of their meeting. Colombia is the world’s largest exporter of cocaine and the steady growth of its coca crop in recent years has tested relations with the United States.

“We are working together so that Colombia eradicates some of what they’re growing in Colombia,” Trump said. “I wouldn’t say that at this moment you’re ahead of schedule, but hopefully you will be at some time in the near future.”

Duque defended his administration, asserting that more cocaine has been eradicated in the first four months of his term than during the eight months before he was sworn into office in August 2018. He said the administration has a “moral duty” to rid Colombia of illegal crops and narcotrafficking.

“We have to deliver. We will deliver, because it is our moral duty,” Duque said.