THOUSAND OAKS, Calif. (AP) — A city reeling from the tragedy of a mass shooting was under a siege of a different sort Friday as raging wildfires on both sides of the city forced widespread evacuations and shut down part of the main freeway to town.

Flames driven by powerful winds torched at least 150 homes in Southern California, burning parts of tony Calabasas and mansions in Malibu and prompting orders for 250,000 people — including some celebrities — to flee as the fire marched across the Santa Monica Mountains toward the sea. The cause of the blazes was not known.

For Thousand Oaks, which had been considered one of the safest cities in the nation before a gunman massacred 12 people at a country music bar, the spasm of violence jolted the city’s sense of security. Encroaching flames, despite the near-constant threat of fire in the bone-dry state, presented an entirely different hazard.

“It’s devastating. It’s like ‘welcome to hell,’” resident Cynthia Ball, said about the dual disasters while she was outside the teen center serving as a shelter for evacuees. “I don’t even know what to say. It’s like we’re all walking around kind of in a trance.” 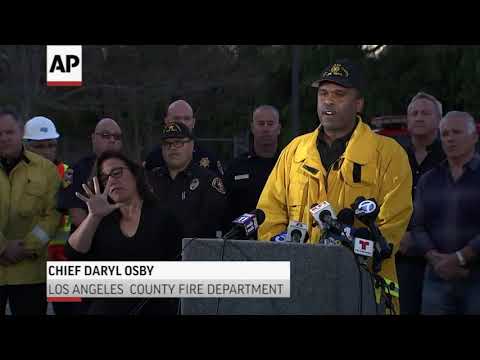 A day earlier, the facility had been the location where grieving family members had gathered and received the grim news on the fate of loved ones who had not returned from the Borderline Bar and Grill, where a Marine combat veteran went on a shooting rampage Wednesday before apparently killing himself.

The investigation into what drove Ian David Long, 28, to kill was continuing even as the city about 40 miles (64 kilometers) from Los Angeles was under threat from one of three major wildfires burning in the state.

Three-quarters of the city of 130,000 was under evacuation orders — and that likely included people affected by the shooting, Thousand Oaks Mayor Andy Fox said.

“Here we are just a few hours later talking now about another crisis right here in Thousand Oaks,” Fox said, making the distinction that the shooting victims and their families had experienced a permanent loss. “Those lives will never be recovered. Tonight we’re talking about a serious fire situation, but thankfully we have not lost a single life. And as difficult as it may be, homes can be rebuilt, property can be reacquired.”

Throughout the day, air tankers swooped through the skies, making low passes to dump water and flame retardant as firefighters tried to protect homes amid gusts topping 60 mph (96 kph). The winds and smoky conditions made for difficult firefighting and at times grounded firefighting aircraft.

In addition to the large hillside homes that ignited and blazed brightly in the middle of the day, the “Western Town” at Paramount Ranch, a popular filming location that included an old West jail, hotel and saloon, burned to the ground.

The entire city of Malibu — home to Hollywood stars and entertainment moguls — was under a mandatory evacuation order and had lost power in places. Fleeing residents jammed Pacific Coast Highway in a procession that crept along as smoke billowed overhead and mansions on the hills went up in flames.

In Thousand Oaks, flames creeping down a hillside were visible from the teen center on Janss Road — named for the family that originally developed the hilly terrain covered with majestic California oaks into what has become a large bedroom community.

At the Vallecito mobile home park for seniors, the fire came so quickly that residents had no time to gather medications and documents. With flames bearing down, firefighters carried people from homes and put them in empty seats of their neighbors’ cars, said Carol Napoli, 74.

Napoli left with her friend, the friend’s son and her mother who is in her 90s and had to leave behind her oxygen tank.

“We drove through flames to get out. They had us in like a caravan,” Napoli said. “My girlfriend was driving. She said, ‘I don’t know if I can do this ...’ Her son said, ‘Mom you have to, you have to drive through the flames.’”

Rich McMillen, 72, had put a few belongings in his car when he noticed smoke picking up and saw flames in the distance. By the time a cellphone alert told him to evacuate, the flames were nearly upon the trailer park, burning on a hillside.

“You could feel the heat from the flames,” said McMillen, who returned Friday and found his home intact but stinking of smoke.

While evacuees arrived at the teen center, firetrucks staged across the street at a command post.

Ventura County Supervisor Peter Foy made a plea at a fire news conference to residents to help their neighbors during this difficult time.

“We appreciate everybody’s efforts and kind prayers for all the people from our victims that lost their lives in the shooting to now what’s happening with people losing their homes,” Foy said.

A section of U.S. Highway 101, the main link between Los Angeles and Ventura and Santa Barbara, was closed because of fire.

The day before under clear skies and no smoke, thousands gathered along the freeway to watch a motorcade carrying the body of a sheriff’s deputy who was killed when he rushed in to confront the shooter.

This story has been corrected to show that the street name is spelled East Janss Road.