WASHINGTON (AP) — Never mind the chants, the roars, the repetition. President Donald Trump acknowledged this past week he didn’t mean it when he told crowds over and over that Mexico would pay — actually pay — for the wall.

Mexico will pay “indirectly,” he now says. To support that claim, he indulged in creative accounting over the course of days marked by a prime-time speech, a trip to the border and a barrage of tweets painting dire threats from the south.

He said the wall will “very quickly pay for itself” by reducing the U.S. drug problem, and pay for itself “many times over” by the benefits he predicts will accrue to the U.S. economy from an updated trade deal with Canada and Mexico.

Neither of these supposed sources of wall payment dings Mexico’s treasury or imposes any cost resembling what his campaign proposed. Back then, he wanted Mexico to hand over up to $10 billion in a single payment or pay equivalent costs through higher tariffs, visa fees charged to its citizens or other punitive measures. Mexico has refused to pay anything toward a U.S. wall.

A look at Trump’s wall-to-wall rhetoric on the wall, in a week when thousands of federal workers missed their first paycheck from the partial shutdown and the president weighed the option of declaring a national emergency at the border: 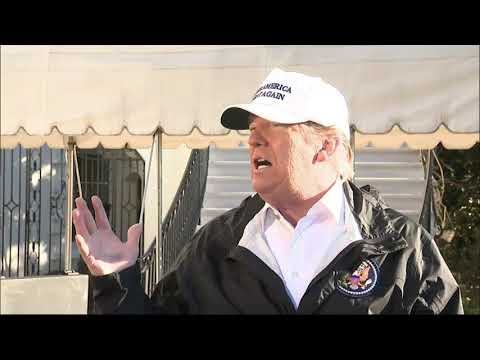 TRUMP: “The Fake News Media keeps saying we haven’t built any NEW WALL. Below is a section just completed on the Border. Anti-climbing feature included. Very high, strong and beautiful! Also, many miles already renovated and in service!” — tweet Friday, showing a section of bollard wall.

THE FACTS: No new miles of barrier construction have been completed under Trump. Existing fencing has been replaced or strengthened in a few areas. It’s true that many miles of barrier are in service — about 650 miles or 1,050 kilometers of fencing — but that was done by previous administrations.

MEXICO AND THE WALL

THE FACTS: A Trump campaign policy paper envisaged an explicit payment from Mexico: “It’s an easy decision for Mexico: make a one-time payment of $5-10 billion,” the paper said.

The plan outlined various ways for Trump to compel Mexico to pay for the wall, such as by Washington cutting off billions of dollars in remittances sent back to Mexico by immigrants living in the U.S., or by recouping the money through trade tariffs or higher visa fees. None of that has happened.

Although his campaign left open the possibility that Mexico might somehow contribute to the cost indirectly, Trump roused his crowds with the straight-ahead promise: “I will have Mexico pay for that wall.”

“Who?” he asked his supporters. “Mexico,” they shouted.

Now he is saying his words were not meant to be taken literally.

TRUMP: “They’re paying for the wall in a great trade deal.” — remarks Thursday in Texas.

THE FACTS: Nothing in his trade agreement with Mexico and Canada would cover or refund the construction cost or require a payment from Mexico. Instead he is assuming a wide variety of economic benefits will come from the agreement that can’t be quantified or counted on. For example, he has said the deal will dissuade some U.S. companies from moving operations to Mexico and he credits that possibility as a payment by Mexico.

The trade deal preserves the existing liberalized environment of low or no tariffs among the U.S., Mexico and Canada, with certain improvements for each country. The deal has yet to be ratified in any member country and its chances of winning legislative approval are not assured.

TRUMP: “President Obama, thank you for your great support — I have been saying this all along!” — tweet Thursday, accompanied by video of Obama speaking as president in 2014.

THE FACTS: Trump’s tweet is deceptive, linking to a video clip that shows Obama, as president, discussing “an actual humanitarian crisis on the border” — a surge of tens of thousands of unaccompanied children and youth, mostly from Central America, who tried to cross from Mexico in 2014. Obama’s remarks do not support Trump’s proposal for a border wall, which the former president has criticized, or endorse the path Trump is considering now: declaring a national emergency that might enable him to circumvent Congress and unilaterally spend money on wall.

Instead, Obama was asking Congress to approve an emergency appropriation to deal with the surge.

TRUMP: “Tonight I am speaking to you because there is a growing humanitarian and security crisis at our southern border.” — address to the nation Tuesday.

THE FACTS: Few would dispute that a humanitarian crisis is unfolding. A sharp increase in the number of families at the border, mostly from Central America, coupled with the Trump administration’s hard-line stance is overwhelming border resources, adding to backlogs in the asylum system and leaving migrants in abysmal conditions on the Mexican side.

Trump, however, has been unable to convince Congress that the border poses a national security crisis. He has made a series of statements falsely claiming that terrorists are pouring in from Mexico, that a wall would choke off shipments of illicit drugs and that people who get into the U.S. illegally commit a disproportionate share of violent crime.

The number of border arrests — the leading gauge of how many people are trying to cross illegally — is actually one-quarter of what it was in 2000, dropping from 1.6 million then to 400,000 in 2018.

THE FACTS: They just won’t fund it the way he wants. They have refused his demand for $5.7 billion to build part of a steel wall across the U.S.-Mexico border.

Democrats passed legislation the day they took control of the House that offered $1.3 billion for border security, including physical barriers and technology. Senate Democrats have approved similar funding year after year. Many Democrats backed 2006 legislation that has resulted in the construction of about 650 miles (1,050 kilometers) of border barrier. Many also supported failed legislation in 2013 that would have doubled the length of fencing and allowed immigrants living in the country illegally to apply for a provisional legal status if they paid a $500 fine and had no felony convictions.

TRUMP: “We lose 300 Americans a week, 90% of which comes through the Southern Border. These numbers will be DRASTICALLY REDUCED if we have a Wall!” — tweet Thursday.

TRUMP: “Our southern border is a pipeline for vast quantities of illegal drugs, including meth, heroin, cocaine and fentanyl. Every week, 300 of our citizens are killed by heroin alone, 90 percent of which floods across from our southern border.” — remarks Tuesday.

THE FACTS: What he’s trying to say in the tweet Thursday is that a wall would stop most heroin from coming into the country and drastically reduce heroin deaths, which average about 300 per week. But the Drug Enforcement Administration says “only a small percentage” of heroin seized by U.S. authorities comes across on territory between land ports of entry. Most of it is smuggled through official border crossings.

The agency says the same is true of drugs generally. In a 2018 report, it said the most common trafficking technique by transnational criminal organizations is to hide drugs in passenger vehicles or tractor-trailers as they drive into the U.S. though land entry ports, where they are stopped and subject to inspection. They also employ buses, cargo trains and tunnels, the report says, citing other smuggling methods that also would not be choked off by a wall.

Despite that disconnect, Trump went so far as to say: “The border wall would very quickly pay for itself. The cost of illegal drugs exceeds $500 billion a year, vastly more than the $5.7 billion we have requested from Congress.”

TRUMP on a border wall: “This should have been done by all of the presidents that preceded me. And they all know it. Some of them have told me that we should have done it.” — Rose Garden news conference Jan. 4.

THE FACTS: Three ex-presidents — Bill Clinton, Jimmy Carter and George W. Bush — denied discussing the wall with Trump; the fourth, Obama, declined to answer. His office sent past comments by Obama criticizing the wall, and the two have not spoken since the inauguration except for a quick exchange at President George H.W. Bush’s funeral. Said Carter: “I have not discussed the border wall with President Trump, and do not support him on the issue.”

TRUMP: “Over the years thousands of Americans have been brutally killed by those who illegally entered our country and thousands more lives will be lost if we don’t act right now.” — remarks Tuesday.

THE FACTS: His statement that people in the country illegally are a special menace to public safety is at odds with plentiful research.

Multiple studies from social scientists and the libertarian think tank Cato Institute have found that people in the U.S. illegally are less likely to commit crime than U.S. citizens — beyond the crime of illegal entry — and legal immigrants are even less likely to commit crime. A March study by the journal Criminology found “undocumented immigration does not increase violence.”

TRUMP: “America proudly welcomes millions of lawful immigrants who enrich our society and contribute to our nation but all Americans are hurt by uncontrolled illegal migration. It strains public resources and drives down jobs and wages.” — remarks Tuesday.

THE FACTS: The U.S. is not experiencing “uncontrolled” illegal immigration. The debate is over whether the controls are strong enough.

As for the costs, a major academic study in 2016 by the National Academy of Sciences, Engineering and Medicine found the job impacts of immigration, when measured over at least 10 years, are very small. It found immigration — legal and illegal — is an overall benefit to long-term economic growth.

Some evidence suggests that skilled immigrants boost wages. Native-born Americans without a high-school degree are most likely to suffer.

TRUMP: “We have terrorists coming through the southern border because they find that’s probably the easiest place to come through. They drive right in and they make a left.” — Rose Garden news conference Jan. 4.

SARAH HUCKABEE SANDERS, White House press secretary: “We know that roughly, nearly 4,000 known or suspected terrorists come into our country illegally, and we know that our most vulnerable point of entry is at our southern border.” — “Fox News Sunday” Jan. 6.

THE FACTS: If they’re driving “right in” through border crossings, no wall would stop them. But as to the broader point, U.S. officials have produced no evidence of a terrorist influx from Mexico.

Trump and some of his aides have misrepresented statistics on foreigners who were stopped globally by Customs and Border Protection because they were on a watch list. They have suggested or plainly stated that they were stopped coming from Mexico.

Sanders acknowledged later in the week: “I should have said 4,000 at all points of entry, not just at the southern border.”

Despite Trump’s portrayal of Mexico as a teeming portal for terrorists, the State Department issued a report in September finding “no credible evidence indicating that international terrorist groups have established bases in Mexico, worked with Mexican drug cartels or sent operatives via Mexico into the United States.”

It went on: “The U.S. southern border remains vulnerable to potential terrorist transit, although terrorist groups likely seek other means of trying to enter the United States.”