MANCHESTER, N.H. (AP) — Republican Sen. Susan Collins of Maine said Friday that President Donald Trump’s tweet criticizing his Supreme Court nominee’s accuser was “appalling” and a disservice to both the judge and the woman who has accused him of a long-ago sexual assault.

Collins, a swing vote on the nomination, spoke at events in Portland, Maine, and later in New Hampshire. She said it is reasonable for Brett Kavanaugh’s confirmation vote to be delayed to allow Christine Blasey Ford to testify Wednesday or Thursday. She said it’s important for the Judiciary Committee to “make it as comfortable as possible,” and that she agrees with some, though not all of Ford’s testimony requests.

Kavanaugh’s nomination has been thrown into doubt by Ford’s allegations that he sexually assaulted her when they were teens. He denies the allegations.

On Friday, Trump tweeted that if the incident was “as bad” as Ford says, then she or her parents should’ve contacted the police. 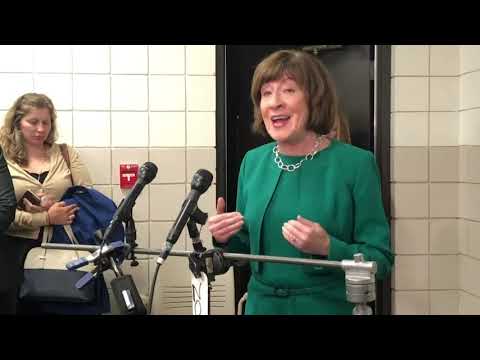 “I was appalled by the president’s tweet,” Collins said in Portland. Asked later whether the tweet hurt the nomination, Collins said, “It has not hurt Judge Kavanaugh, but that doesn’t make it appropriate. Regardless of what the facts of this case prove to be, we know that the crime of sexual assault is one of the most underreported crimes in our country. So the president’s statement was wrong and I very much wish he had no comment at all. I think it was a disservice to Dr. Ford and likely a disservice to Judge Kavanaugh.”

Collins spoke to reporters shortly after the chairman of the Senate Judiciary Committee said his panel will vote Monday on the nomination if there’s no agreement with Ford’s attorneys by 10 p.m. Friday. She said Ford’s attorneys should respond quickly, but did not directly answer whether she disagreed with scheduling a vote for Monday if the deadline isn’t met.

Collins said she agrees that Ford should be allowed to testify later in the week without Kavanaugh present and has recommended that lawyers for the two sides be allowed to do the questioning. Collins said she disagrees with the request that Ford testify after Kavanaugh, and that it would be reasonable to bring in outside counsel during the testimony to help it go as smoothly as possible.

A few dozen demonstrators attended Friday’s event in Portland, at a senior living facility called The Cedars. They held signs with slogans such as “Be A Hero” and “Listen To Women.” They also set up a table on the sidewalk to collect notes from people urging Collins to vote against approving Kavanaugh. In Manchester, about 15 protesters held signs reading “KavaNo” and “Believe Victims.”

In New Hampshire, Collins said she has assembled a team of 19 attorneys to help her understand Kavanaugh’s record and was about 95 percent finished with her analysis when she spoke to him by phone Sept. 14, after the allegations against him became known but before Ford came forward publicly.

“I recognize how import this decision is. I want to make sure I’ve been extremely thorough,” she said. “Do I feel pressure? Sure. But I don’t feel pressure to make a decision until I’m ready.”

Another New England senator, Democratic Sen. Jeanne Shaheen of New Hampshire, also slammed Trump’s criticism of Ford on Friday. Shaheen tweeted that Trump’s tweet was “disturbing” and the president should “put down his phone” and “call for an FBI investigation” if he wants to get to the bottom of Ford’s allegations.

Collins spoke later Friday at an event at Saint Anselm College in Manchester, New Hampshire, where much of the discussion was about Kavanaugh. Retired Supreme Court Justice David Souter was in the audience.