NEW YORK (AP) — Some records on Broadway are bound to fall one day and others are surely safe for all time. Sarah Stiles has one that’s hard to top.

“I’ve had puppet sex on Broadway twice,” she says. “I think that is like a record or something.”

Indeed, the actress who just earned her second Tony nomination has had a hand in some rather intimate and fuzzy encounters during a career that’s taken her from Broadway musicals to dramas and now TV in “Billions” and “Get Shorty.”

She made her Broadway debut as Kate Monster in “Avenue Q” and later earned a Tony nod when her slinky puppet Jolene seduced a demonic one in “Hand to God.” Add to that a credit as a puppeteer while touring with Tommy Tune in “Dr. Dolittle” and it’s natural to ask about this weird, recurring theme.

Don’t ask Stiles for answers, who doesn’t have formal puppet training up her sleeve. “I never had any interest in puppets. But they keep coming to me,” she says, laughing.

Stiles has put childish things away for her latest Broadway show, a Tony-nominated musical adaptation of the 1982 film “Tootsie,” about a struggling actor who impersonated a woman in order to improve his chances of getting a job. There’s some discreet sex but no puppets.

Stiles plays Sandy Lester, the actress ex-girlfriend of the gender-switching hero, Michael Dorsey, played in the film by Dustin Hoffman. Sandy is described as an “open bar of emotions,” someone who fakes that she’s choking just so someone will hold her. 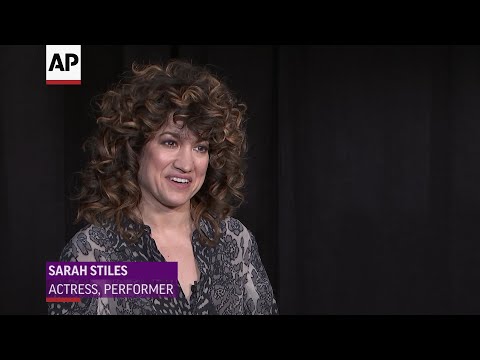 In the musical, a character suggests she try a therapist, to which she replies: “I tried. I just didn’t think a therapist should say ‘wow’ that many times during a first session.” On Tuesday, Stiles earned a Tony nod for playing Sandy, which includes delivering the hysterically manic song “What’s Gonna Happen.”

“She’s allowed to go from zero to 100 in a second. Being able to play with that kind of range, is really, really fun,” Stiles says. “She’s a little spinning top.”

The comedy modernizes the problematic 1982 film source by embracing the #MeToo movement and cheering the push for equality between the sexes. It’s a woke “Tootsie” and Stiles is happy to be part of it.

“The movie was released 37 years ago so things have changed a lot and we have to speak to our audience today and our audience day would not be OK with some of the things that happened in the film. We’ve really brought it up to date.”

As a sign of how far Stiles has come, she didn’t need to audition for the role. Director Scott Ellis met her at a reading for another project and instantly new she’d be perfect in “Tootsie.”

“I just loved her. I thought, ‘Oh, this woman can just take stuff and look at it in a very different way than what is expected.’ I just fell in love with her,” he says. On his next reading of “Tootsie,” he asked if Stiles was available. She was, read the part and, at the end, he hugged her and simply offered her the role.

She may not have to audition nowadays, but Stiles is able to channel an earlier time as a struggling actress to play Sandy. To earn money, she played an elf at Macy’s, was a baby-sitter and knitted caps. “I made rent a couple of months doing that during Christmastime,” she says.

Stiles, who grew up in New England, remembers when a life in the theater beckoned. It was during a performance of “Les Miserables” in Boston. She was either in fifth or sixth grade.

“I sat on the edge of my seat and held my breath the whole time. So much so that I gave myself this horrifying cramp situation because I was on the edge. I just couldn’t believe what was happening in front of my eyes.”

Somehow, she’ll continue playing Sandy while also juggling her commitments to the third season of “Get Shorty” on Epix and “Billions” on Showtime, whose fourth season is unspooling now. Thankfully, she’s a power napper.

“I can sleep anywhere,” she says. “I’ll sleep for 10 minutes before I go back to my next thing. It’s that kind of thing. I love working. I want to just keep going. I can’t say no. I just love it. It’s life.”

Mark Kennedy is at http://twitter.com/KennedyTwits