Texas ICE raid the latest in series of enforcement actions

DALLAS (AP) — The arrest of nearly 300 people at a Dallas-area technology company was one of the largest enforcement actions of its kind in a decade and punctuates the push by the Trump administration to target companies employing people who federal authorities say are not authorized to be in the U.S.

With a helicopter watching overhead, about 200 law enforcement officials descended Wednesday on CVE Technology Group in Allen, a city about 15 miles (24 kilometers) northeast of Dallas, and detained more than two thirds of the people at the technology repair plant.

The 280 people arrested for working in the United States illegally came from 15 different countries on multiple continents and were employed refurbishing used cellphones, U.S. Immigration and Customs Enforcement officials said Thursday. Another 125 people were working there legally, authorities said.

Most of the group were given a date to appear in immigration court and released for “humanitarian reasons,” such as being the sole caregiver for a child, but 110 people are being held in federal detention centers in Texas, said Special Agent in Charge Katrina Berger.

“Businesses that knowingly hire illegal aliens create an unfair advantage over their competing businesses,” Berger said. “In addition, they take jobs away from U.S. citizens and legal residents, and they create an atmosphere poised for exploiting their illegal workforce.” 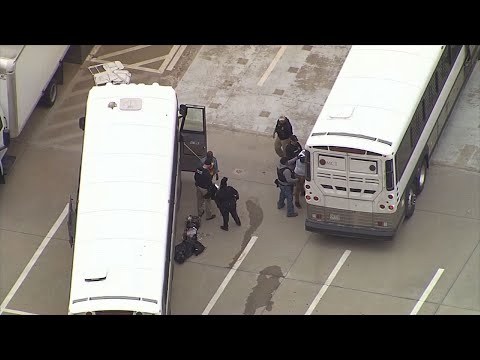 Berger referred questions about whether anyone with the company would be fined or face criminal charges to federal prosecutors. A spokeswoman for the U.S. Attorney’s Office for the Eastern District of Texas declined to comment on the ongoing investigation.

Family members of CVE workers who were arrested say the raid was a heavy-handed tactic against people simply working to provide for their families.

Valerie Trevino told The Dallas Morning News that her mother, Graciela Velazquez, moved from Mexico 25 years ago and has worked for the company for years. Trevino said her mom doesn’t have a criminal record

“It’s insane to just get people who are working to make a living,” she said. “They’ve done nothing wrong besides work. My mom’s worked her entire life here. So other than that, I mean what really is her crime?”

The Texas raid was the latest in a series of high-profile busts of businesses around the country as part of an immigration crackdown under President Donald Trump. Critics say the raids break up hard-working families and make it even harder for businesses to find employees in a tight labor market. ICE frequently touts the raids as major operations to break up criminal enterprises, but rarely releases names of the immigrants arrested, making it difficult to see what comes of their cases.

Eight of the people arrested Wednesday already had a final order to be deported and nine had re-entered the country after an earlier deportation, Berger said.

ICE started receiving tips that CVE was knowingly hiring people not authorized to work in the country more than a year ago, Berger said. Homeland Security Investigations, a division of ICE, began an audit in January of CVE records that confirmed hiring irregularities, according to the statement.

The large enforcement action in North Texas came as immigration officials say they are being strained by the large number of migrants crossing the southern border.