NEW YORK (AP) — Authorities said Friday they have dealt an unprecedented blow to the violent MS-13 street gang, announcing charges against nearly 100 of the group’s members and associates on Long Island.

Suffolk County District Attorney Timothy Sini revealed a sweeping indictment that he said “decimated” the gang’s leadership and drug suppliers on Long Island. He described the case as the largest of its kind against MS-13 in New York, where the gang has been blamed for dozens of killings since 2016.

The two-year investigation by state and federal authorities thwarted more than a half-dozen murder plots, Sini said, and also provided authorities insights into the gang’s structure and recruiting patterns. The investigation was bolstered by an expansive wire tap in which the authorities monitored calls from more than 200 phone numbers.

Gang members on Long Island conspired with colleagues from as far away as Europe and Oklahoma, collecting cash from drug sales and sending that money to the organization’s leaders in El Salvador, according to the 77-count indictment handed up Monday.

The gang feuded against rivals and would even kill its own members who showed signs of disloyalty or failed to perform “required tasks” such as paying dues or trafficking drugs and weapons, the indictment says. 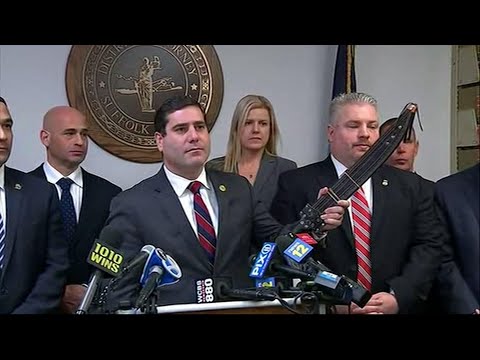 “MS-13 is a ruthless, savage gang,” Sini said at a news conference, pointing to a machete recovered by law enforcement, the gang’s signature weapon. “They will attempt to recalibrate and send individuals to take up leadership roles in Suffolk County. That’s why we have to stay vigilant.”

Authorities said they seized more than 10 kilograms of cocaine, hundreds of fentanyl pills, drug ledgers, long guns and other firearms, and more than $200,000 cash. Those taken into custody included the leaders of nine so-called “cliques” — factions of MS-13.

“What you’re hearing from us today is that we’re more committed than every to eradicate this gang,” Sini said. ”Is the battle over? Absolutely not.”

MS-13, also known as Mara Salvatrucha, is considered one of the top transnational organized crime threats in the United States. Violence committed by the gang, including the 2016 slayings of two teenage girls, helped spark an aggressive effort by the FBI and the U.S. Justice Department to dismantle the gang,

President Donald Trump, who visited Long Island in July 2017 to address the gang problem, has blamed the violence and gang growth on lax immigration policies.

Investigators have made dozens of arrests of suspected gang members in recent years as part of a crackdown on MS-13. In 2017, police arrested 15 MS-13 members on murder and other charges following a spate of bloodshed that included the massacre of four young men in a Long Island park and the killing of a suspected gang rival inside a deli.

“Their rules are violence, fear and control of their territory,” said Ray Donovan, special agent in charge of the U.S. Drug Enforcement Administration in New York. “We will continue to push them back.”

MS-13 recruits young teenagers from El Salvador and Honduras, though many gang members were born in the U.S. Long Island has a large population of unaccompanied minors from Central America, including many who were fleeing the violence in their home nations.

MS-13 is believed to have been founded as a neighborhood street gang in Los Angeles in the mid-1980s by immigrants fleeing a civil war in El Salvador. El Salvador’s Supreme Court defined the gang as a terrorist group in 2015, allowing courts there to give tougher sentences to its members. ___ Michael Balsamo reported from Washington.