NEW YORK (AP) — Talk show diva Wendy Williams feels lucky to be alive after more than a decade of cocaine abuse and now wants to help others be present in their own lives.

Williams has been giving back through the Hunter Foundation, created with husband Kevin Hunter, since 2014. The two recently added a new anti-drug initiative, BeHere.org. Their goal is to raise $10 million in five years to fund such things as drug treatment facilities and research, the latter focused on K2.

“It’s very pretty packaging,” Williams told The Associated Press recently of the popular and potentially deadly synthetic marijuana. “It looks like a pack of Pop Rocks. The kids are smoking it. Adults smoke it. It’s not just a city thing. It’s an easy access thing. You can walk into a bodega and grab a loaf of bread and some K2.”

Williams detailed her own drug abuse in her 2003 memoir, “Wendy’s Got the Heat,” written with Karen Hunter. Williams began, as many do, as a cocaine dabbler. Her habit grew to 3 grams a day over a decade in broadcasting, first in radio. She said she quit on her own without the use of rehab or any assistance. 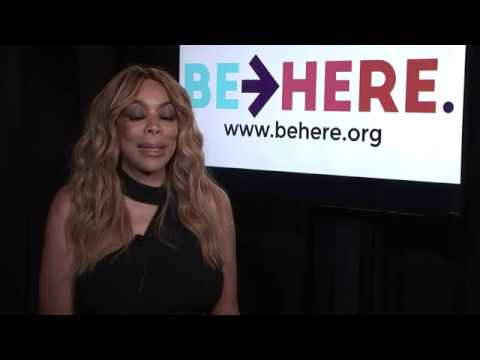 “I woke up one day and said, you know, I’ve never been arrested. I’ve never shamed my family by being arrested,” Williams told the AP. “My job has never fired me, although they looked in my eyes and they knew I was high, but I was also making great ratings so they chose to just deal with it. ... I woke up and I said, let me move along with my life.”

Substance abuse and addiction are discussed and dealt with much more openly today, but there’s a long way to go before complete acceptance, she said.

“People are embarrassed. People don’t want to talk about it. People ignore the family member who’s always five sheets into the wind, as they say. For people who get clean, sometimes it’s difficult for them to admit that they were a substance abuser because there’s a stigma,” Williams said.

Williams recalled some of her own lows. She passed out in the bathroom of a radio station where she was working overnights years ago, returning for a visit recently while promoting her TV show to notice the baseboard she had knocked off the wall was still missing. She had sneaked out of the studio to use cocaine during a long song.

Losing that job, she said, “would have been a big wake up call.”

Getting clean led to bigger things, including her transition from radio to TV.

Williams celebrated her 54th birthday in July and began the 10th season of “The Wendy Williams Show” earlier this month, complete with a fresh take on her theme song done by Fergie.

“I cannot believe that we’ve been on this long,” she said. “Not because we don’t have a good show but because people are so impatient. People are very, very impatient, particularly during daytime TV. It’s a more intimate time to be with people. They’re drinking their coffee, they still have their robe on. You’re the friend who’s invited into their home, but they don’t just invite anyone. They gave me a chance.”

Williams celebrated her birthday with a fundraising bash to support Be Here.

“I feel wonderful and kicky,” she said of the 54-year mark. “I don’t like to lie about my age. I hate that people are still lying about their age.”