ROME (AP) — The quest to trace the identities of all the victims of the Mediterranean’s deadliest migrant shipwreck has instead revealed that the sinking was far deadlier than anyone knew.

One of the two investigators on the project, tracing families and survivors in Africa, has confirmed that the boat that sank on April 18, 2015 carried not 800 migrants as previously believed, but as many as 1,100.

That up to 300 people could vanish reflects the hidden toll of migration. At a time when global migration is at a record high, The Associated Press has found in an exclusive tally that at least 62,284 migrants have died or disappeared worldwide since 2014. That’s more than double the only official attempt at a toll, by the U.N.’s International Organization for Migration .

The discovery also makes it even harder for the investigators to keep Italy’s promise to name all the dead, especially at a time when Europe has turned against migrants.

After the boat sank, then-Prime Minister Matteo Renzi committed Italy to giving the migrants from the April 2015 shipwreck their identities back. It was a “short period of sunlight,” said Cristina Cattaneo, Italy’s top forensic investigator. 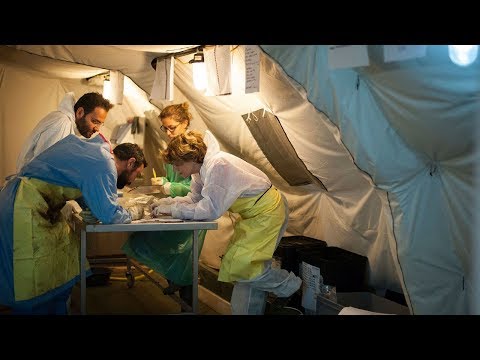 The political climate has since shifted in Europe. In Italy, as elsewhere, there is no longer a will to support survivors, let alone migrants who have died.

Cattaneo works on the case without pay at her university lab in Milan. Her counterpart, Jose Pablo Baraybar from the International Committee of the Red Cross, gathers DNA from possible relatives in Africa. Together, they are piecing together exactly who died on what many Italians now call simply the peschereccio, the fishing boat.

The migrants on the peschereccio started their journeys in some 20 countries, from Bangladesh to the western tip of Mauritania, according to information from the two investigators, published accounts of survivors, Italian government documents, and families who fear their loved ones were among the lost passengers.

One father, Cheikh Fofana, said his son called to say he was leaving soon for Europe. That was the last he heard from Tidiane.

On the day before the peschereccio left from Libya, 12 rows of men, 100 to a row, lined up on the beach. At the last minute, a truck arrived filled with around 200 men from East Africa.

Not everyone on the beach would fit on the peschereccio, although the smugglers managed to slip a few extra on board.

The overcrowded boat made it 77 nautical miles off the coast of Libya, when it started to founder.

Twenty-four bodies were fished out of the water and dropped off in nearby Malta. But Malta wouldn’t accept the 28 survivors, who were then taken by the Italian coast guard to the Sicilian port city of Catania. The boat pulled up to the dock in the middle of the night, where a throng of volunteers tossed flowers and handed the survivors cellophane-wrapped care packages.

Around this time, Fofana called his son’s phone again. A stranger answered and told him Tidiane had left for Italy.

“I know that if he is dead, there’s nothing more I can do, by the grace of God. But let me know, is he alive? Is he dead?” Fofana said, his lined face twisting in anguish.

It took a year to raise the hull from the sea floor and drag it to Italy.

In her book released this month, Cattaneo described “a carpet of human silhouettes that stretched out across the area of the hold ... almost all face down, some in a fetal position, many swollen with putrefaction.”

In the end, Italy’s government counted 547 victims, plus 325 skulls that Cattaneo keeps in her lab for further study.

When it was time to find the families, Italy turned to Baraybar, the Peruvian forensic anthropologist.

An intense man with enormous eyes that peer from behind button-lensed glasses, Baraybar started with the names of 27 young men from Mauritania whose families had reported them missing around April 2015 to the Red Cross.

“You cannot just tell them a story and you cannot misrepresent who you are. You’re not there to bring them a body bag or give them money,” said Baraybar.

During a trip to Mauritania, the 27 names led to 40 more to try to match against the DNA samples sequenced by Cattaneo in Italy.

That led him to his most recent trip to Senegal, where he confirmed the higher count with people who had direct knowledge of how the boat was loaded.

After nearly four years, Cattaneo and Baraybar are nearing their first identification — with hundreds more to go.

Baraybar knows more about how the networks operate, more about the paths migrants take — and more about how to trace the dead. Like Cattaneo, he remains committed to pursuing the identities of the migrants who perished on the shipwrecked peschereccio.

“Families do matter,” he said. “And not knowing kills.”