WASHINGTON (AP) — The United States will send 1,000 more troops to Poland as part of a growing security and economic partnership between the two countries, President Donald Trump said Wednesday. He and Polish President Andrzej Duda differed over Russia’s intentions toward the U.S. ally.

At a time of ongoing worries about Russian military activity, Duda said he wanted Russia to be a friend of Poland even as he recounted his country’s long history of conflict with Moscow.

“We would like Russia to be our friend, but unfortunately, Russia again is showing its very unkind, unpleasant imperial face,” Duda said, noting its attacks on Georgia in 2008 and Ukraine in 2014. He spoke through a translator during a news conference with Trump in the White House Rose Garden, where they discussed details of the military deal.

Trump, who has a history of appearing to defer to Russia, seemed to downplay Duda’s concerns.

“I hope that Poland is going to have a great relationship with Russia. I think it’s possible. I really do,” Trump said. “I think because of what you’ve done, and the strength, and maybe we help also, because of what we’re doing and doing for Poland. 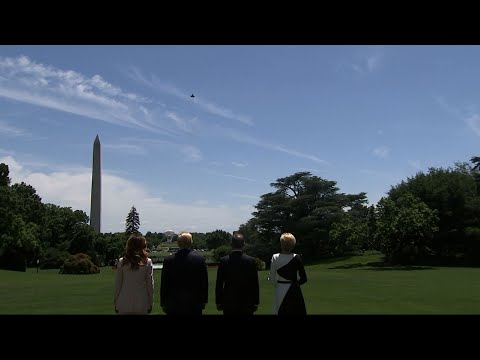 Trump said he likely will make his second visit to Poland as president in September, the 80th anniversary of the invasion by Nazi Germany in 1939 that set off World War II. And he said he was thinking about allowing Poland to participate in a State Department program that allows its citizens to visit the U.S. for tourism or business without obtaining a visa, but that more progress was needed before a final decision.

Polish leaders had hoped to land a permanent U.S. base in their country that they said could be called “Fort Trump,” but the agreement announced Wednesday fell short of that. It includes just the addition of about 1,000 troops and a squadron of Reaper drones for intelligence purposes.

Trump said the Polish government will pay for the infrastructure to support the troops. The service members will be added to an existing force of about 4,500 U.S. troops that rotate in and out of Poland.

Trump said he probably would shift some U.S. service members from Germany, where tens of thousands have been based for a “long, long time,” or from elsewhere in Europe. He offered no timetable for when the additional military personnel would begin arriving in Poland.

Trump also hailed Poland’s decision to buy more than 30 F-35 joint strike fighter jets from the U.S. In recognition of that purchase, a single F-35 made two passes over the White House on a sunny afternoon as Trump, Duda and their wives watched from the lawn. Duda looked up and waved at the passing jet.

Duda also invoked Trump’s “Make America Great Again” campaign slogan as he thanked the president for his interest in Poland.

In the Oval Office, Trump said he had no concerns about backsliding on democracy in Poland. Duda denied there were problems, saying “everything is excellent.” Critics have accused the Polish government of taking steps to undermine the judiciary and the news media.

Trump’s decision to increase the U.S. military presence in Poland was welcomed by NATO Secretary General Jens Stoltenberg. “This shows the strong commitment of the US to European security & the strength of the transatlantic bond,” he said in a tweet.

The Eastern European nations have reached out to the U.S. and NATO for greater protection, fearing becoming the next target of Russia’s military advance.

The increase in U.S. forces in the region also reflects America’s new national defense strategy that declares great-power competition with China and Russia as a top priority.