Collapse of buildings in Rio kills 3 in militia-run area

The collapse of the four-story buildings underscored the shoddy infrastructure that plagues Latin America’s largest nation and put a spotlight on illegal militias that control large swaths of Rio, including the area where the buildings stood.

A statement from the office of Rio Mayor Marcelo Crivella said the area was run by militias and the buildings did not have permits. Authorities were only able to reach the area while being accompanied by police in November, when they condemned the buildings, according to the statement.

Militias, which are made up of former firefighters, police and soldiers, charge residents for basic services in areas they control. When they began forming decades ago, many saw them as a force for good because they provided security that the state could not. Today, however, such groups are full-fledged criminal organizations which are often considered the most severe security threat in Rio.

In a practice called “grilagem,” militias often take control of public land and build illegal housing to rent informally. Many Brazilians choose to live in the residences because the prices are cheaper than legally registered buildings, but there are no regulations or safety checks. 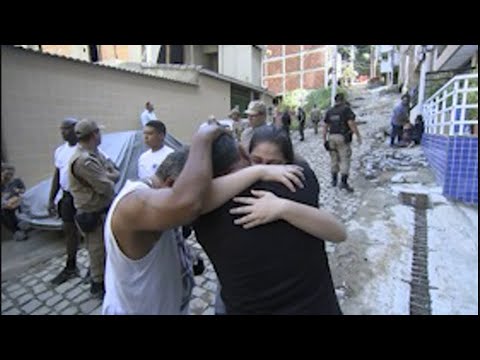 Last year, posts on social media advertised units in the buildings that collapsed. The posts made clear that they were not legal, but said the apartments were “beautiful investments” with elevators, round-the-clock security and easy access to public transportation.

The social media posts came from users who claimed to work for a real estate company called Imobiliaria Muzema. The Brazilian real estate regulation agency CRECI told The Associated Press that it has no registration of a company with that name.

The two buildings that collapsed Friday were in a part of the city that also was particularly hard hit by heavy rains that caused massive flooding Friday and killed at least 10 people. Mud from the flooding still lined the streets.

Following a similar downpour in February, Mayor Crivella told daily TV Globo that authorities had cleared militias from the area, and the city was working to improve the drainage system.

Residents told the AP Friday that militia members never left the area and were still charging for many basic services. The residents asked that their names not be used for fear of retribution.

Col. Marcelo Gisler, deputy commander of Rio’s Civil Defense force, said at an impromptu press conference that two people died at the scene, five people were rescued by residents before firefighters arrived, six after, and three were in the process of being pulled from the rubble. Gisler indicated they had information of 13 people potentially missing in the wreckage.

“We’re using every means possible to try and find survivors. Dogs are very effective in situations like this, and we are using drones and aircraft,” Gisler said.

A resident identified as Claudio Rodrigues, 41, was pulled from the rubble alive but died at the hospital, according to Brazilian newspaper O Dia.

The identities of the other victims were not released.

As the afternoon wore on, helicopters struggled to land on the rubble because of fears that the ground was unstable, and instead hovered above to load the injured.

The city also rigged artificial lights and reflectors to enable firefighters to continue their search into the night, and Rio’s infrastructure secretary Sebastion Bruno said the buildings surrounding the site were at risk.

“Our job now is to anchor the surrounding buildings as they are at risk of collapse. The structure closest to site was hit during the event, and it is only held up because it is anchored by the building surrounding it,” he said in a video released by the mayor’s office.