Kayakers get up close with collapsing Alaska glacier

Andrew Hooper’s wife had warned him about getting too close to an Alaska glacier. She wasn’t pleased, he said, when he returned from a kayaking trip earlier this month soaked to the bone but with incredible footage of part of the giant glacier’s sudden and dramatic collapse.

“It was absolutely gorgeous watching the raw power of the glacier as it fell in,” he said Monday. “It was a beautiful event that we were lucky to have survived.”

Hooper and his friend set off on a kayaking trip off the Kenai Peninsula to get a glimpse at the Spencer Glacier. The drop-off point to get to the glacier is only accessible via train, he said.

After paddling around for a while, Hooper said he heard a cracking noise near the glacier. They turned on their GoPro cameras and began filming.

“When it fell, it was cracking small pieces here and there then a big chunk came, another big chunk, and then it just collapsed in on itself,” he said.

A wave of ice and water sprayed over them. At one point, Hooper said, he let go of his camera to shield himself from the ice.

The incident came during a stretch of unusually warm weather in Alaska and just days after July became Alaska’s warmest month ever, according to the National Oceanic and Atmospheric Administration. 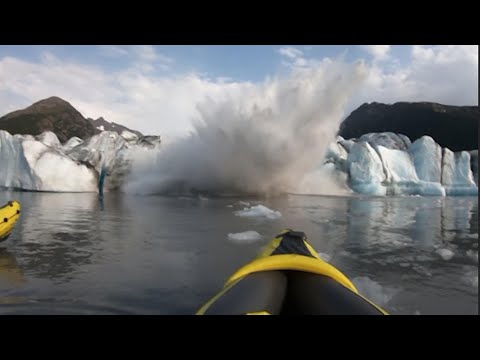 Spencer Glacier is about 60 miles (97 kilometers) southeast of Anchorage, which on July 4 hit 90 degrees (32 Celsius) for the first time ever.

Last month, a German couple and their Austrian recreational guide were found dead in the water near the toe of the Valdez Glacier, about 100 miles (161 kilometers) east of Anchorage. City spokeswoman Sheri Pierce said the glacier was calving, or shedding ice. She said if the glacier released, it could cause significant trauma.

The bodies were transported to the state medical examiner’s office to determine the cause of death.

Hooper didn’t want to comment on global warming, saying “that’s not my area of expertise,” but noted that while traveling around Alaska for the summer, locals have told him and his family it’s been a lot warmer than usual.

In 2017, the Hoopers sold their home in Katy, Texas, and have been traveling the U.S. mainland and Canada in an RV. The couple’s two sons, 4 and 6, are home-schooled. “We call it road-schooling,” Hooper said.

Hooper and his buddy compiled their videos and posted them online, which captured a lot of attention. They’ve been giving interviews about the experience. Hooper said he hopes to gain some followers to his family’s Instagram account.

The Hoopers have been in Alaska since July and don’t know yet what their next destination will be.