AP NEWS
China aims to build its own Yellowstone on Tibetan plateau
By CHRISTINA LARSON and EMILY WANG
November 12, 2019 GMT

Ringed by the world’s tallest mountain ranges, the region long known as “the rooftop of the world” is now in the crosshairs of China’s latest modernization push, marked by multiplying skyscrapers and expanding high-speed rail lines.

But this time, there’s a difference: The Chinese government also wants to set limits on the region’s growth in order to design its own version of one of the U.S.’s proudest legacies — a national park system.

In August, policymakers and scientists from China, the United States and other countries convened in Xining, capital of the country’s Qinghai province, to discuss China’s plans to create a unified park system with clear standards for limiting development and protecting ecosystems.

The country’s economy has boomed over the past 40 years, but priorities are now expanding to include conserving key natural resources, says Zhu Chunquan, the China representative of the International Union for the Conservation of Nature, a Switzerland-based scientific group.

“It’s quite urgent as soon as possible to identify the places, the ecosystems and other natural features” to protect, Zhu says.

Among other goals, China aims to build its own Yellowstone on the Tibetan plateau.

Restoring landscapes and species in a world damaged by climate change. Explore AP's in-depth series: What Can Be Saved

Zhu serves on an advisory committee providing input on the development of China’s nascent national park system, expected to be officially unveiled in 2020. Chinese officials also have visited U.S. national parks, including Yellowstone and Yosemite, and sought input from varied organizations, including the Chicago-based Paulson Institute and the Nature Conservancy.

One of the first pilot parks will be in Qinghai, a vast region in western China abutting Tibet and sharing much of its cultural legacy. The area also is home to such iconic and threatened species as the snow leopard and Chinese mountain cat, and encompasses the headwaters of three of Asia’s great waterways: the Yangtze, Yellow and Mekong Rivers.

“This is one of the most special regions in China, in the world,” says Lu Zhi, a Peking University conservation biologist who has worked in Qinghai for two decades.

While construction continues at a frenzied pace elsewhere on the Tibetan plateau, the government already has stopped issuing mining and hydropower permits in this region.

But a key question looms over the project: Can China marry the goals of conservation and tourism, while safeguarding the livelihoods and culture of the approximately 128,000 people who live within or near the park’s boundaries, many of them Tibetan?

“China has a dense population and a long history,” Zhu says. “One of the unique features of China’s national parks is that they have local people living either inside or nearby.”

Yellowstone is widely considered the world’s first national park. After it was created in 1872, the U.S. government forced the Native Americans who lived in the area to resettle outside the park boundaries, in keeping with the 19th-century notion that wilderness protection meant nature apart from people. But countries that attempt to establish park systems in the 21st century now must consider how best to include local populations in their planning.

“Figuring out how to achieve ecological conservation and support for the communities at the same time — that’s the most complicated rub you have,” says Jonathan Jarvis, a former director at the U.S. National Park Service and now a professor of the University of California, Berkeley, who has toured the Qinghai pilot park, called Sanjiangyuan.

China has previously undertaken vast resettlement programs to clear land for large infrastructure projects, such as Three Gorges Dam and the South-to-North Water Transfer Project. These resettlements left many farmers in new homes without suitable agricultural fields or access to other livelihoods.

But in developing the national parks, the government is giving conservation-related jobs to at least a swath of people living in Sanjiangyuan to stay and work on their land. The “One Family, One Ranger” program hires one person per family for 1800 yuan a month ($255) to perform such tasks as collecting trash and monitoring for poaching or illegal grazing activity.

It’s difficult to interview residents in China’s ethnic borderlands like Qinghai, due to restrictions on journalists that make it hard to travel widely or freely in those areas. Regions with large ethnic and religious minorities, including all Tibetan areas, are subject to heightened political and religious controls.

But a few people living in Angsai, a Tibetan village located within the new Qinghai park, were willing to speak, although it’s not possible to determine if their experiences are typical.

A-Ta is a Tibetan herder whose income largely comes from raising yaks and collecting caterpillar fungus, a folk medicine taken as a purported aphrodisiac or for respiratory problems. He also leads a team of trash collectors, traveling as much as 34 kilometers (21 miles) a day to comb the hillsides for plastic bottles and other waste as part of the “One Family, One Ranger” program.

“I am living in this land, my living is relying on this land,” he says, as his sister heats a kettle in their modest home. A poster showing the faces of China’s past leaders and current Communist Party general secretary, Xi Jinping, hangs on the wall.

A-Ta says he is grateful for work that allows his family to stay on their land, even as people in other parts of Qinghai have had to leave. His own son is employed leading a relocation program for “a huge population of nomads” in Dzarto, a county in southern Qinghai.

“I love this land very much,” he says. “I always motivate and encourage people to protect the environment and contribute to the conservation work.”

Kunchok Jangtse is a Tibetan herder who also earns money cleaning up rubbish through the “One Family, One Ranger” program.

He has an additional volunteer position through the Chinese nonprofit Shanshui — the name means “mountain, water” — installing and maintaining motion-activated camera traps, which help scientists monitor endangered species in Qinghai.

As he affixes a camera trap to a thin tree trunk, he explains, “The reason why it has to be installed in this location is because this is the main migration route of the majority of wild animals.”

Such camera traps have captured rare footage of snow leopards and Chinese mountain cats, including mothers and their cubs playing near a temporary den.

Kunchok Jangtse says the work of protecting the environment, including reporting illegal poaching activity, is important.

“Our religion is connected with wild animals, because wild animals have a consciousness and can feel love and compassion — therefore, we protect wild-animals,” he says.

From his main work raising livestock and collecting caterpillar fungus, Kunchok Jangtse says he can make about 20,000 yuan ($2,830) a year. He is grateful for the additional income from the ranger program, but mainly hopes his other livelihood won’t be impeded — and that he won’t eventually be forced to leave.

“I’m not a highly educated person, and I am very concerned it may bring many difficulties in my life if I would switch my job and move to another place,” he says.

The question of local people’s culture and livelihoods is one of the top concerns that former U.S. National Park Service director Jarvis says China has to wrestle with, along with establishing laws and funding.

“They need a legal framework that defines what a park is,” Jarvis says. “And they need sustainable funding.”

The creation of protected areas is not a new idea in China. In fact, roughly 15% of the country’s land already is assigned to a bewildering patchwork of local and regional parks. But many existing reserves are simply parks on paper, run by various agencies without enforceable guidelines.

In contrast, the national parks system is being designed from the ground-up to incorporate global best practices and new science.

In his office in Beijing, Ouyang Zhiyun, deputy director at the Chinese Academy of Sciences’ Research Center for Eco-Environmental Sciences, pores over hundreds of carefully shaded maps of mainland China that denote priority areas for protecting threatened and endangered species, as well as “eco-system services,” like safeguarding water supplies and limiting soil erosion.

Recently, Ouyang was the lead scientist for China’s sweeping “national ecosystems assessment,” which used 20,000 satellite images and 100,000 field surveys to examine how China’s land changed between 2000 and 2010, with some of the findings published in the journal Science in 2016. One resulting statistic: China’s urban area increased 28% during that period.

Now Ouyang is drawing upon that work, combined with surveys of more than 1,500 species of endangered and threatened plants and animals, to map priority areas for conservation and advise park planners. He is focusing on habitats of endangered species that live only in China.

The first parks to be formally incorporated into China’s national park system will showcase the country’s vast and varied landscapes and ecosystems — from the granite and sandstone cliffs of Wuyishan in eastern China to the lush forests of southwestern Sichuan province, home to giant pandas, to the boreal forests of northeastern China, where endangered Siberian tigers roam.

When it comes to ecology, few countries have more to lose, or to save, than China.

“Check out AP's video: China wants its own Yellowstone” 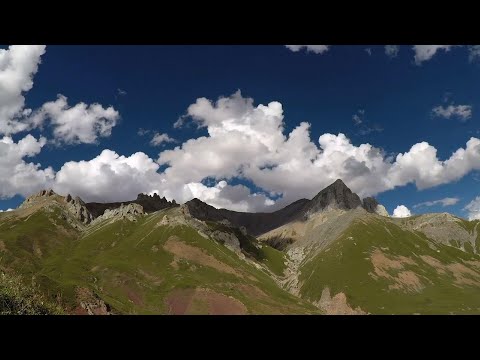