Rallying more than 1,000 of the party faithful at the Ohio Democratic Party’s fall fundraising dinner, Harris said the confirmation process that prompted her to walk out at one point of the Senate Judiciary Committee was “a sham and a disgrace.”

Elections matter, she said, “and so let this last week — and all that we have experienced in terms of our frustrations and our anger and our sadness — let’s use this week to give us all that extra energy that we know we have.” 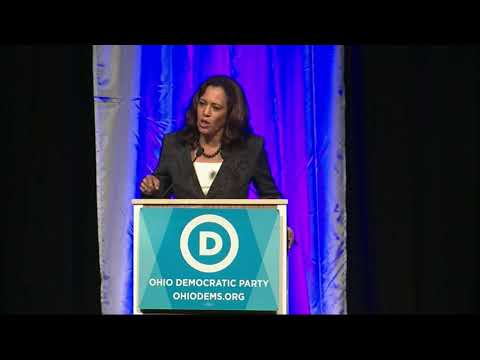 Harris called this “an inflection moment in the history of our country” not unlike the civil rights movement of the 1960s.

“This is a moment in time that is requiring all of us collectively to look in the mirror and ask a question, that question being: ‘Who are we?’” she said. “And part of the answer, Ohio, is we are better than this.”

She acknowledged the nation’s swirling emotions around Kavanaugh’s confirmation process, where Christine Blasey Ford testified that he sexually assaulted her in high school and Kavanaugh angrily denied her account. But Harris said she rejects the premise of America is deeply divided.

“When we wake up in the middle of the night with that thought that has been weighing on us, sometimes we wake up in a cold sweat,” she said. “Well, for the vast majority of Americans, when we wake up thinking that thought, it is never through the lens of the party for which we are registered to vote.”

She said those thoughts are about kitchen table issues like paying the bills, affording health care, paying for college or getting or keeping a job.

“By bringing in California Kamala to attempt to rally middle America, the Ohio Democratic Party has shown just how out-of-touch they’ve become,” she said in a statement. “Sherrod Brown, Richard Cordray and the Democratic ticket have left hardworking Ohioans behind and instead embraced a coastal-elitist agenda that is wrong for Ohio.”

Harris heads Monday to Cleveland. She wanted her Ohio visit to be longer, but was forced to cancel two planned appearances in Cincinnati on Saturday to remain in Washington for the Kavanaugh confirmation vote, where she and Brown voted no.

She said she doesn’t believe Kavanaugh’s story is over.

Harris said “truth is like the sun: It always comes up in the morning. And on these issues that were presented during those hearings, I believe the truth will eventually reveal itself.”