NEW YORK (AP) — The boos were loud. And for President Donald Trump, they may have felt unfamiliar.

Trump was showered with jeers, boos and chants (as well as some cheers) when he attended a World Series game at Nationals Park in Washington on Sunday. It was a rare moment of in-your-face disapproval for a president whose White House goes out of the way to shield him from protests and demonstrators.

Since taking office, Trump has rarely ventured out to places in his deeply Democratic adopted home city or elsewhere that might feature high-volume hostility or a cold shoulder.

When the boos began as Trump’s image flashed on the ballpark’s giant video screen, the president seemed momentarily taken aback. He mouthed something to his wife, Melania Trump, while gamely trying to clap along. But his smile froze and then faded as the boos continued and some in the crowd launched into a brief chant of “Lock him up,” a version of the phrase chanted against Hillary Clinton at dozens of Trump rallies during the 2016 campaign.

White House officials tried to play down the negative feedback, which erupted when Trump’s image appeared on the giant video screen during a tribute to the military. 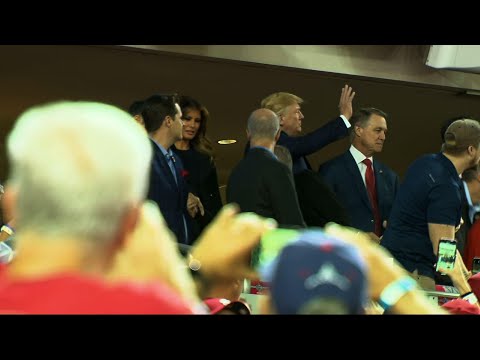 Though White House officials were prepared for jeers in a ballpark located in a city where only 4 percent of residents voted for Trump, some thought the president’s announcement hours earlier about the death of Islamic State leader Abu Bakr al-Baghdadi might temper some of the boos. That proved not to be the case, despite efforts to limit the heckling.

The presidential motorcade pulled into Nats Park a little after 8 p.m. allowing the president to slip inside the stadium while fans were focused on the start of the game and the ceremonial first pitch thrown by restaurateur and humanitarian Jose Andres, a noted Trump critic. Trump took his seat in a luxury box with a sea of friendly faces, including Republican legislators.

It was Trump’s first baseball game since taking office and he attracted little attention from the crowd for the first few innings.

But at the end of third inning, as part of a salute to veterans, the Nationals honored some service members sitting near the president. Loud applause rang out until the camera panned over to Trump. On a dime, the cheers instantly turned to loud boos. And once the camera moved on to show more veterans, the cheers resumed.

Allies said the president should embrace the boos.

“I’d wear getting booed in the swamp as a badge of honor,” tweeted his oldest son, Donald Trump Jr. “If you’re pissing them off you’re doing something right!”

Unlike some of his predecessors, Trump has made little effort to join the Washington scene, with the singular exception of his visiting his hotel, a Republican-friendly oasis a few blocks from the White House. He has not eaten at a Washington restaurant beyond those in the hotel and has passed on attending some traditional social events such as the Kennedy Center Honors and White House Correspondents’ Association dinner.

During the presidential transition in late 2016, there was talk of Trump frequently returning to his home in Trump Tower while in office. But those plans were scrapped after it became apparent that Trump would face large, angry crowds in Manhattan.

In London this summer, Trump took repeated helicopter rides of just a few miles that kept him away from throngs of demonstrators, including a balloon that depicted the president as a baby .

And on Monday, Trump was shielded from the hundreds of protesters gathered near his speech at a police chiefs’ conference in Chicago and a fundraiser at the Trump International Hotel & Tower in downtown Chicago.

Trump’s motorcade took a route that went nowhere near demonstrators and police kept the protesters blocks away from the conference site. Similarly, Trump’s motorcade slipped into the docking area of his hotel, while hundreds of protesters gathered just across the Chicago River.

They were visible to hotel guests and condo residents on the south side of the hotel, but it was unclear if Trump had any view of them from his fundraiser.