BURIEN, Wash. (AP) — A man driving a van apparently being used as a getaway vehicle crashed into a crowded store near Seattle, injuring 11 people, including a 2-year-old child who was in critical condition, police said.

The driver of the van tried to take off at a high speed after a woman, who had apparently shoplifted inside the Ross Dress for Less store in the suburb of Burien, then got into the van Monday night, said Sgt. Ryan Abbott of the King County Sheriff’s Office.

“The male driver was the getaway driver for the female that was shoplifting inside the Ross,” Abbott said.

The van first hit an unoccupied car in front of the store and then crashed through the store’s windows.

“A lot of people started fleeing as soon as the van came in,″ Abbott said. “People were scattering of course and trying to get away.”

The vehicle hit a stroller with a 2-year-old boy in it and several other people. The boy, his 41-year-old grandfather and a man in his 30s were critically injured and taken to Harborview Medical Center, according to the sheriff’s office.

The toddler remained in critical condition Tuesday morning, and one man was in the intensive care unit, Harborview spokeswoman Susan Greggtoldthe Seattle Times. 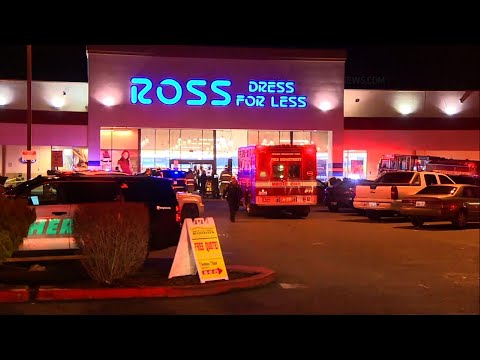 Gregg did not have an update on the condition of the other man. Eight others were injured and taken to hospitals.

The van could be seen in the front of the store, with glass and other debris from the storefront all around it.