WASHINGTON (AP) — The father of a Florida school shooting victim helped the White House celebrate Hanukkah on Thursday and lauded President Donald Trump as a “fighter” who has “retaken Washington for the American people.”

Trump said the menorah was being lit in the East Room in memory of 18-year-old Meadow Pollack “and all of the precious lives stolen from us this year, and we will pledge our resolve to confront hatred and violence in all of its evil forms.”

Meadow was among 17 people killed in a February shooting at Marjory Stoneman Douglas High School in Parkland. A 17-year-old student has been charged in the Valentine’s Day massacre.

Meadow’s father, Andrew Pollack, said he has been fighting for his daughter and other students since the shooting. He was among a group of teen survivors and parents of murdered children who attended a White House discussion shortly after the shooting.

“Mr. President, despite the pundits and so-called experts who said you couldn’t, you have retaken Washington for the American people,” Pollack said. “You are the greatest friend that the Jewish people have ever had in the White House, not only because you recognized Jerusalem as the capital of Israel and followed through on your promise to move the embassy to Jerusalem, but because you understand the spirit of Hanukkah, within your heart.” 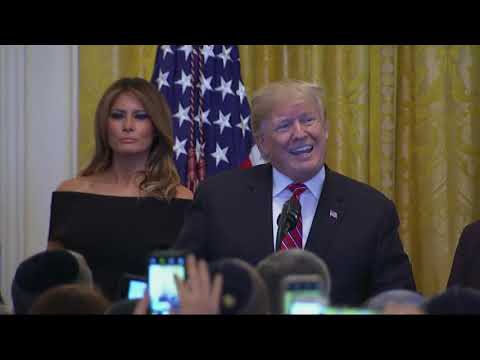 Pollack added: “We have to keep fighting because the safety of our children and the future of our country depend on whether we honor the true spirit of Hanukkah, by staying true to our traditions and to keep on winning.”

Trump described Pollack’s sorrow and pain as unimaginable and thanked him and his family for attending.

“We promise to hold the memory of beautiful Meadow and every Parkland victim in our hearts forever,” Trump said.

The president also mentioned the fatal October shooting of 11 Jews at a Pittsburgh synagogue. He said that after that “sinister” killing, “we reaffirmed our solemn duty to confront anti-Semitism everywhere. Trump added that we “must stamp out this vile hatred from the world.”

The audience erupted into cheers when Trump mentioned his decision last year to recognize Jerusalem as Israel’s capital and, earlier this year, to move the U.S. Embassy to Jerusalem from Tel Aviv.