LOS ANGELES (AP) — How some of the nominees reacted Thursday when they heard they were up for Golden Globe Awards, which will be handed out on Jan. 6 in Beverly Hills, California:

“I’m glad we’re in that category because we will take ‘Mary Poppins’ out. I’m not competitive with the other movies but I am competitive with ‘Mary Poppins.’ Dick Cheney is going for her.” — Director Adam McKay, in an interview, on “Vice” being nominated in the musical or comedy category, one of six nominations for the film about the former vice president.

“I’m just overwhelmed with joy. I was with my pops. He was the one who woke me up, actually. He said he loved me.” — John David Washington, son of Denzel Washington and nominee for best actor in a movie drama for “BlacKkKlansman, in an interview.

“BOOM SHAKALAKA” — Spike Lee, nominated for best director for “BlacKkKlansman,” in an interview.

“It never gets old. It’s all about the part. And a part like this doesn’t come along very often.” — Glenn Close, nominated for best actress in a film drama for “The Wife,” in an interview.

“WHAT” — Elsie Fisher, age 15, nominated for best actress in a musical or comedy for “Eighth Grade,” via Twitter.

“Hell yeah!” — Fisher’s reaction to hearing she was trending on Twitter for the tweet above, in an interview. 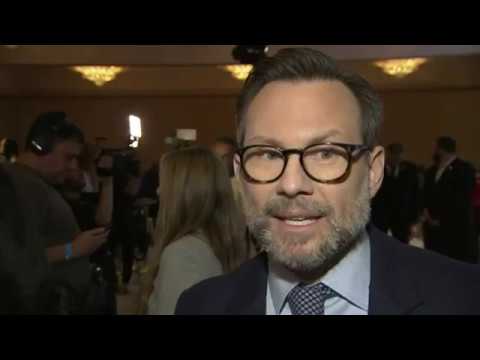 “For so many of us, this really was the first time we weren’t the token Asian. It’s the first time we weren’t supporting another person’s story. This movie was actually about our story. That was special because we didn’t see that when we were growing up. When you don’t see that, it makes you think maybe you’re not a part of your country as much as you are.” — Constance Wu, in an interview, nominated for best actress in a musical or comedy for “Crazy Rich Asians.”

“I’m in the tub, and I’m putting deodorant on, I’m heading to work. It’s cold.” — Willem Dafoe, nominated for best actor in a drama for “Eternity’s Gate,” giving a phone interview from the Canadian Rockies, where he’s filming the Disney dogsled movie “Togo.”

“I naturally woke up and stared at my phone for about 25 to 30 minutes until it started ringing. Then I said to myself, ‘Thank God.’ I started getting a little nervous. You never know.” — Peter Farrelly, nominated for best director for “Green Book,” in an interview.

“Today is actually a really important holiday in Germany, it’s St. Nicholas Day. He brings an early batch of presents to children. So it’s especially fantastic. I’m driving around Los Angeles to get more presents for my kids.” — Florian Henckel von Donnersmarck, director of “Never Look Away,” nominated for best foreign film, in an interview.

“It was a nice surprise to be woken up to. I thought it was another evacuation.” — Marco Beltrami, in an interview, who was nominated for his score for “A Quiet Place,” who had to evacuate from his studio for a week in last month’s wildfire in Southern California.

“When you go into writing a song for a movie like this, you hope that it’s good enough to make it in the film. But to be nominated is amazing. It’s just a really good song. The way it’s performed takes it to another level.” — Mark Ronson, in an interview, co-writer of the song “Shallow” featuring Bradley Cooper and Lady Gaga for the film “A Star is Born.”

“Woke up to my phone leaping off the bedside table. Grateful for the nom, grateful to the @goldenglobes, grateful to all of you.” — Lin-Manuel Miranda, nominated for best actor in a musical or comedy for “Mary Poppins Returns,” via Twitter.

“If the ‘Incredibles’ family had anything to say, they would say, ‘We can get nominated for just doing our job? Amazing.’” — Brad Bird, director of “Incredibles 2,” nominated for best animated film, in an interview.

“I knew we had something good on our hands, but the idea of a Spider-Man movie being recognized is unreal.” — Peter Ramsey, co-director of “Spider-Man: Into the Spider-Verse,” nominated for best animated film, in an interview.

“The waitress came over and said ‘are you all right,’ because I was very emotional. This has never happened to me in my life. It’s not what should be happening to a man of my vintage.” — Richard E. Grant, 61, nominated for best supporting actor in a film for “Will You Ever Forgive Me,” in an interview.