Vegas airport tower closes after after controller gets virus

Airplanes coming into McCarran International Airport were being guided by by other nearby air traffic controllers, the FAA said in a statement. Southwest Airlines, one of the biggest carriers at the airport, said it had canceled 230 flights because of the closure.

The closure of the airport’s control tower because of the virus was the second of its kind in the U.S., after the FAA on Tuesday closed the control tower at Chicago’s Midway International Airport after several technicians tested positive.

Las Vegas visitors hoping to see the city’s famous casinos were met with closures and barricades in front of some of them after Nevada’s governor ordered gambling to stop on Wednesday, along with the closure of non-essential businesses.

Gov. Steve Sisolak issued the unprecedented order this week as he urged people to stay home and help contain the coronavirus.

The monthlong freeze on gambling shuts down not only the well-known casinos of Las Vegas and Reno — it also extends to slot machines and other devices found in groceries and convenience stores. 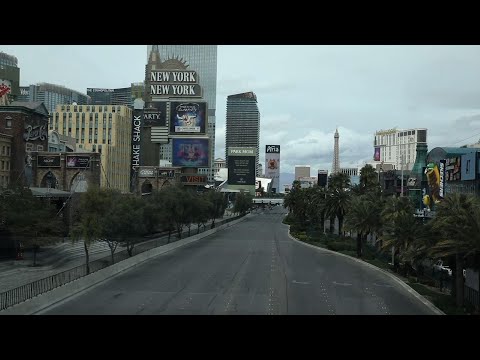 The broad directive also closes non-essential businesses such as bars, movie theaters and gyms. Restaurants must shutter their dining rooms and only offer takeout or delivery.

Enforcing the shutdowns was left to local officials. Washoe Sheriff Darin Balaam said deputies have stepped up unified patrols with Reno and Sparks police, partly out of concern for potential looting or break-ins at shuttered storefronts.

“Absolutely, that’s our concern any time we have a reduction like this,” Balaam said.

Nevada has more than 95 reported cases, including one death. The vast majority of people infected get only mild or moderate symptoms, such as fever and cough, and recover in about two weeks. But many will need hospitalization — particularly vulnerable are older adults and those with existing health problems who can develop severe complications, including pneumonia.

The governor released a list of businesses considered essential and non-essential.

Sisolak’s office did not )respond to a request for comment.