The real Brian Banks speaks out on prison injustice, reform

NEW YORK (AP) — When Brian Banks’ home was a prison cell due to a crime he didn’t commit, he never imagined his life would be the subject of a film. He was only concerned with clearing his name and regaining his freedom.

Now, seven years after he was exonerated on a rape allegation, Banks hopes the film detailing his fight for justice helps move along reform.

“What I want people to take away from this is that what I went through was unacceptable, what many others have gone through is unacceptable,” he told The Associated Press.

“For those that are currently behind bars, or no longer behind bars but have experienced wrongful conviction, I want you to know that you’re not alone, that you haven’t been forgotten, that there are people working on trying to fix these wrongs, and as a person who’s been through it, I’m one of them,” he added.

Banks, 34, was a standout high school football player who many believed had a shot at the NFL, until his dreams were derailed when he was falsely accused of rape by a high school classmate in 2002. He was only 16, took a plea and served nearly six years in prison. He spent an additional five years on parole with a mandatory ankle bracelet as a registered sex offender, until he was exonerated in 2012 after his accuser recanted and with help from the California Innocence Project. 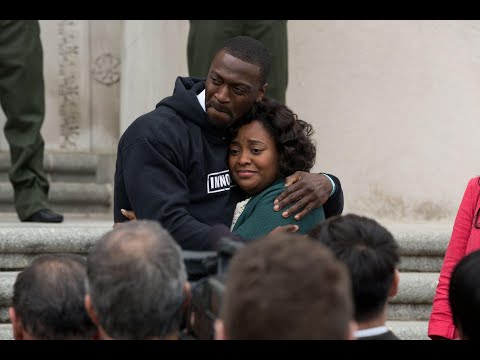 Brooks hopes the film will motivate viewers to join the criminal justice reform fight. Once Banks was cleared and Hollywood came calling, the two said their goal was to make a “justice movie,” not a football movie.

“I want people to walk out of this movie theater and remember this movie next time they’re sitting in jury duty, that maybe this person in front of them is innocent,” Brooks told the AP. “And next time they go into a voting booth to not vote out of fear because politicians have been making people afraid for a long time. The only way reforms can happen is if people are thinking straight.”

Since his release, Banks has worked as a life coach and public speaker. His book, “What Set Me Free,” came out in July.

The film follows the release of “When They See Us,” the Emmy-nominated Netflix limited series that tells the stories of the Central Park Five, a group of New York teens who spent six to 13 years in prison after being wrongfully convicted of raping a female jogger in 1989.

“I know those guys — those are friends of the Innocence Project network. We get together on a yearly basis and share our stories,” Banks said.

He had a hard time sitting through parts of the series that was created, co-written and directed by Ava DuVernay.

“I have only watched half of that series and that’s because the second half was just a little difficult for me to watch because I can relate,” Banks said. “I know what it feels like. I know what they went through. And so once the court proceedings of that series kind of came to a conclusion and they were found guilty and the whole prison experience began, I had to tune out, man.”