Florence pours on the rain amid fears of catastrophic floods

NEW BERN, N.C. (AP) — The Marines, the Coast Guard, civilian crews and volunteers used helicopters, boats and heavy-duty vehicles Saturday to rescue hundreds of people trapped by Florence’s onslaught, even as North Carolina braced for what could be a fearsome new stage of the disaster: widespread, catastrophic inland flooding.

The death toll from the hurricane-turned-tropical storm climbed to 11.

A day after blowing ashore with 90 mph (145 kph) winds, Florence practically parked itself over land all day long and poured on the rain. With rivers swelling toward record levels, thousands of people were ordered to evacuate for fear the next few days could bring the most destructive round of flooding in North Carolina history.

More than 2 feet (60 centimeters) of rain had fallen in places, and the drenching went on and on, with forecasters saying there could be an additional 1½ feet (45 centimeters) before Sunday is out.

“I cannot overstate it: Floodwaters are rising, and if you aren’t watching for them, you are risking your life,” Gov. Roy Cooper said.

As of 11 p.m., Florence was centered about 40 miles (65 kilometers) east-southeast of Columbia, South Carolina, amd crawling west at 3 mph (6 kph) — not even as fast as a person walking. Its winds were down to 40 mph (75 kph). But with half of the storm still out over the Atlantic, Florence continued to collect warm ocean water and dump it onshore. 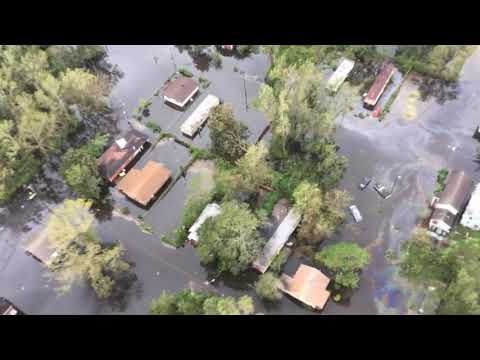 In its initial onslaught along the coast, Florence buckled buildings, deluged entire communities and knocked out power to hundreds of thousands of homes and businesses. But the storm was shaping up as a two-part disaster, with the second, delayed stage triggered by rainwater working its way into rivers and streams. The flash flooding could devastate communities and endanger dams, roads and bridges.

Stream gauges across the region showed water levels rising steadily, with forecasts calling for rivers to crest Sunday and Monday at or near record levels. The Little River, the Cape Fear, the Lumber, the Neuse, the Waccamaw and the Pee Dee were all projected to overrun their banks, possibly flooding cities and towns.

Authorities ordered the immediate evacuation of up to 7,500 people living within a mile (1.6 kilometers) of a stretch of the Cape Fear River and the Little River, about 100 miles (160 kilometers) from the coast. The evacuation zone included part of the city of Fayetteville, population 200,000. Record flooding is expected Tuesday on the Cape Fear at a crest of 62 feet (nearly 19 meters) there.

In the Fayetteville area, John Rose owns a furniture business with stores less than a mile (1.6 kilometers) away from the Cape Fear River. He moved quickly as workers helped him empty more than 1,000 mattresses from a warehouse in a low-lying strip mall. “If the river rises to the level they say it’s going to, then this warehouse is going to be under water,” he said.

And on Saturday evening, Duke Energy said heavy rains caused a slope to collapse at a coal ash landfill at a closed power station outside Wilmington, North Carolina. Duke spokeswoman Paige Sheehan said about 2,000 cubic yards (1,530 cubic meters) of ash were displaced at the Sutton Plant and that contaminated storm water likely flowed into the plant’s cooling pond.

The company hasn’t yet determined whether any contamination entered the Cape Fear River. Sutton was retired in 2013 and the company has been excavating ash to remove to safer lined landfills. The ash left behind when coal is burned contains toxic heavy metals, including lead and arsenic.

One potential road out was blocked as flooding forced the shutdown of a 16-mile (26-kilometer) stretch of Interstate 95, the main route along the Eastern Seaboard.

In New Bern , along the coast, homes were completely surrounded by water, and rescuers used inflatable boats to reach people.

Kevin Knox and his family were rescued from their flooded brick home with the help of Army Sgt. Johan Mackie, whose team used a phone app to locate people in distress. Mackie rode in a boat through a flooded neighborhood, navigating through trees and past a fencepost to reach the Knox house.

“Amazing. They did awesome,” said Knox, who was stranded with seven others, including a boy carried out in a life vest.

New Bern spokeswoman Colleen Roberts said 455 people in all were rescued in the town of 30,000 residents without any serious injuries or deaths. But thousands of buildings were damaged in destruction Roberts called “heart-wrenching.”

Across the Trent River from New Bern, Jerry and Jan Andrews returned home after evacuating to find carp flopping in their backyard near the porch stairs.

Coast Guard helicopters were taking off across the street to rescue stranded people from rooftops and swamped cars. Coast Guard members said choppers had made about 50 rescues in and around New Bern and Jacksonville as of noon.

And Marines rescued about 20 civilians from floodwaters near Camp Lejeune, using Humvees and amphibious assault vehicles, the base reported.

In Lumberton, about 80 miles (130 kilometers) inland, Jackie and Quinton Washington watched water filling both their front and back yards near the Lumber River . Hurricane Matthew sent more than 5 feet (1.5 meters) of water into their home in 2016, and the couple feared Florence would run them out again.

“If it goes up to my front step, I have to get out,” Quinton Washington said.

The dead included a mother and baby killed when a tree fell on a house in Wilmington, North Carolina. South Carolina recorded its first death from the storm, with officials saying a 61-year-old woman was killed when her car hit a tree that fell across a highway.

Three died in one inland county, Duplin, because of water on roads and flash floods, the sheriff’s office said. A husband and wife died in a house fire linked to the storm, officials said, and an 81-year-old man died after falling and hitting his head while packing to evacuate.

In Washington, President Donald Trump was briefed on Florence’s impact and later tweeted, “Deepest sympathies and warmth go out to the families and friends of the victims. May God be with them!”

The National Hurricane Center said Florence broke a North Carolina rainfall record that had stood for almost 20 years: Preliminary reports showed Swansboro got more than 30 inches (75 centimeters) and counting, obliterating the mark set in 1999, when Hurricane Floyd dropped just over 24 inches (60 centimeters) on the state.

As of noon, Emerald Isle had more than 23 inches (58 centimeters) of rain, and Wilmington and Goldsboro had about a foot (30 centimeters). North Myrtle Beach, South Carolina, had around 7 inches (18 centimeters).

Forecasters said the storm will eventually break up over the southern Appalachians and then swing to the northeast, its remnants moving into the mid-Atlantic states and New England by mid-week.