WASHINGTON (AP) — Sometimes even the president of the United States needs somebody to vouch for him.

No, Trump insisted Thursday, he did not have a temper tantrum a day earlier when he cut off a White House meeting with congressional Democrats after just three minutes.

To prove it — in the middle of a meeting with farmers — he called on five members of his staff to bear witness to his demeanor.

One by one, his advisers dutifully stepped forward to testify, saying Trump had been “very calm,” albeit “direct,” in his meeting with the Democrats. Then the president questioned the mental capacity of House Speaker Nancy Pelosi, who had irked him Wednesday with her suggestion that he was engaged in a “cover-up” as he directed aides to refuse to cooperate with congressional inquiries.

The testimonials were a wild detour amid Trump’s announcement of new federal assistance for farmers caught up in his escalating trade war with China.

“Kellyanne, what was my temperament yesterday?” Trump asked. “Very calm,” she said, adding that the president did not throw a temper tantrum. 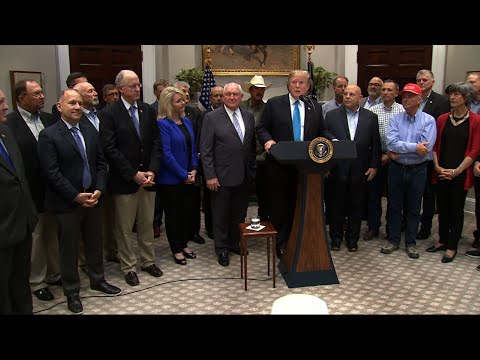 “You were very calm. You were very direct,” she said. “You yourself have tried time and time again to negotiate and work with them on issues like border security, which they call a manufactured crisis. It’s time for them to wake up and to stop waging this political war.”

Trump’s desire for public affirmation from those serving under him has been a defining trait of his administration. It was clear at his first Cabinet meeting nearly two years ago, when almost all his advisers offered saccharine praise for the president. World leaders have learned to shower Trump with accolades before television cameras if they want to get on his good side.

Now it was his staff’s turn.

White House press secretary Sarah Sanders had stepped out of the room, so Trump turned to Larry Kudlow, the director of the National Economic Council, to weigh in.

“You were very calm. You laid out your case,” Kudlow said.

Trump was on a roll.

“The narrative was I was screaming and ranting and raving and it was terrible,” Trump said. “And I watched Nancy and she was all crazy yesterday — she was with the hands — she reminded me of Beto. She actually reminded me of Beto, maybe a little bit worse.” Trump has repeatedly accused Democratic presidential candidate Beto O’Rourke of excessive gesticulation.

By then, Sanders had been summoned and returned to do her part.

“Very calm. I’ve seen both,” she said of Trump’s personality, getting a laugh from those in the room. “Very calm and straightforward and clear that we have to actually get to work and do good things for the American people.”

Bringing up the rear was Hogan Gidley, the deputy press secretary, who said Trump was calm but had “every right” not to be.

There was one other order of business for Trump: He gave Pelosi a nickname — “Crazy Nancy.” But then he took it back, not wanting it to appear derivative of his moniker for Vermont Sen. Bernie Sanders.

He added of Pelosi: “I’ve been watching her a long time. She’s lost it.”

For her part, Pelosi suggested a staff or family “intervention” for Trump for the good of the nation.

Trump concluded with his concise verdict on his own mental state, declaring, “I’m an extremely stable genius.”

This story has been updated to delete a reference to Gidley not being at the Pelosi meeting; he says he was.